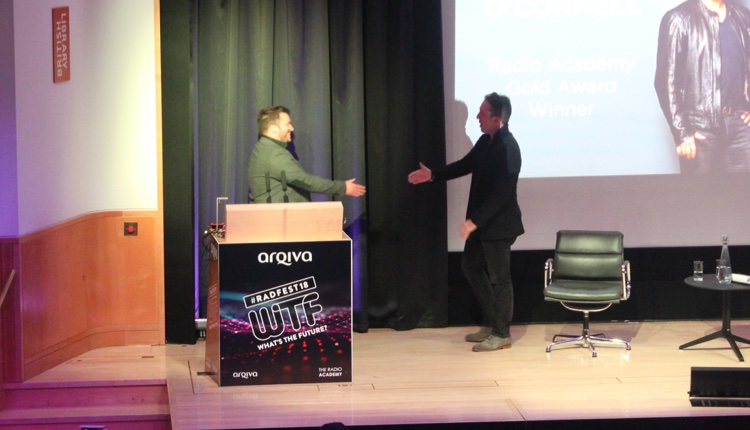 Absolute Radio’s breakfast show presenter OC has been given a Gold Award from the Radio Academy.

The honour was announced by Claire Sturgess during an interview at the Radio Festival on Tuesday, and presented by OC’s co-host Richie Firth.

The award adds to his numerous radio awards he’s won during his career to date, and to his induction to the Radio Academy Hall of Fame which he received in 2014.

Christian is leaving Absolute Radio after a 12-year stint on breakfast to join Gold FM in Melbourne.

He joined the station for breakfast when it was known as Virgin Radio as a replacement for Pete & Geoff, and has won almost a dozen Sony Radio Academy Gold awards along with six Arqivas.

Great advise from @OC for being in commercial radio “Don’t be a dick!” #radfest18 @RichieFirth pic.twitter.com/utkEek8VRE

“I see a lot of kids who want to be brilliant straight away”. @OC on starting out in radio and perfecting your craft.

"There have been more misses then hits" @OC says that how you deal with mistakes is the real test of being a presenter #radfest18 pic.twitter.com/zNdNAn6MRZ

"On paper, that guy shouldn't work on any radio show" @OC on @RichieFirth and the unique ability he has to be able to get away with starting arguments like "whether Katsu Curry is spicy" #radfest18 pic.twitter.com/XQKhtbCek0

Talking about "the David Cameron incident" @OC says he wasn't going to ask David political questions so they asked which side he'd sit if he was sharing a bath with Sam… "probably the taps, we can start the rumour it's because he likes the plug up his arse" #RADFEST18 pic.twitter.com/VnN5IrIQhD

Need a new or improved logo for your radio station? Visit OhMy.Graphics and see how awesome you can look.
Posted on Tuesday, May 15th, 2018 at 1:09 pm by RadioToday UK