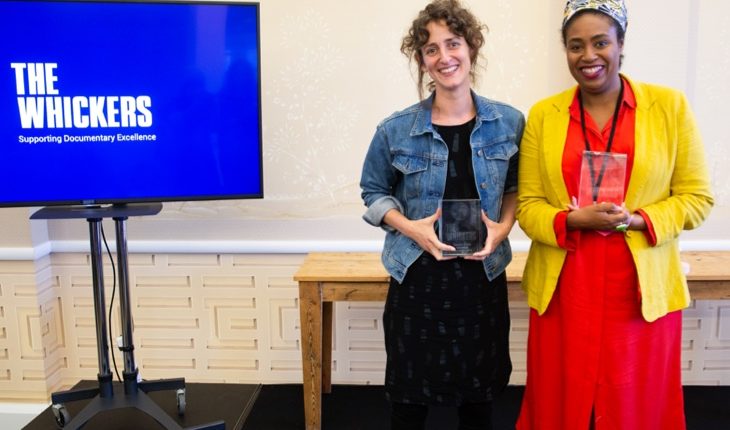 This year’s Radio Audio Funding Award from Whickers has been won by ‘Stokely in Cuba by Isis Thompson’ – a radio documentary inspired by civil rights activist Stokely Carmichael.

Isis was selected at the annual Open City Documentary Festival following a live pitch by the five finalists in front of a panel of industry judges and walks away with an award of £7,000 towards the creation of the final audio documentary.

The Radio Audio Funding Award (RAFA) is awarded annually to an emerging radio producer from anywhere in the world with the most promising pitch for an authored documentary which fulfils their core criteria. The RAFA has a main award worth £7,000 and a runner-up contribution of £3,000.

Isis Thompson said: “To be this year’s Whicker RAFA winner feels totally and completely amazing. Coincidentally, I was taught at the NFTS by Dick Fontaine who worked with Alan Whicker for many, many years, so I feel that a lot of what was taught to me came originally from Alan. I am so delighted to have won this year’s Award and I can’t wait to get started!”

Chair of The Whickers’ Awards Committee and Alan Whicker’s long-term partner Valerie Kleeman said Thompson’s selection: “We loved her enthusiasm, her originality and her honesty, and feel that she breaks new ground.”

The runners-up prize of £3,000 went to Biker Radio Rodcast, India’s first motorcycling podcast, which will follow several hardcore biking enthusiasts as they take part in one of the most gruelling motorcycling rallies in the world – the Raid de Himalaya.

International TV and radio executive and member of the judging panel, Jane Mote commented: “46 million bikers in India…who knew? I can’t wait to hear more about the world of this huge and new biking community as they take part in this physically and mentally challenging rally. The plan to take listeners into a different and surprising world that turns our preconceptions about India on their head is exactly what Alan would have wanted to do.”

Alongside the RAFA, the winner of the Documentary Audio Recognition Award (DARA), for a completed work was presented to Chicago-based radio producer Sarah Geis for her insightful documentary ‘The Art of Now: Guantanamo’. Sarah receives £3,000 in recognition of her work. This documentary follows Mansoor Adayfi, who spent 15 years imprisoned without charge at the American military prison at Guantanamo Bay. He takes listeners behind the headlines, telling the story of his years there, through the artwork made by himself and other men detained as part of the “war on terror.”

Sarah said of the Award: “Winning The Whickers DARA award is incredibly meaningful for me as a maker of radio features, and as a huge encouragement for me to continue on and try to tell stories with interesting structures. It’s also incredibly meaningful for Mansoor Adayfi, the main voice within the piece. He is a Yemeni man detained without charge at Guantanamo for almost fifteen years who is an incredible writer and speaker with enormous resilient. He is so excited and it feels like winning this Award is really a testament to his experience, and the humanity of men held at Guantanamo, being recognised.” Judge Michael Stewart said: “This is a great example of how radio can bring a world into being. Beautifully crafted, it tells a shocking story that makes us confront the appalling consequences of choices that our political leaders have made in our name.”

This year, two of the finalists were also presented with runners-up awards, receiving a prize of £750 each: ‘Deaf Heart’ by Australian producer, Georgia Moodie, follows the story of Jodee Mundy, the only person in her family who can hear. Ever since she was little, she has moved between the Deaf community and mainstream society, feeling a little out of place in both.

The Messenger (Episode 2) by Australian journalist, Michael Green and Abdul Aziz Muhamat, a 26-year-old from Sudan who was forcibly transferred to Manus Island, Papua New Guinea, by the Australian government after seeking asylum. The Messenger takes listeners into the Australian immigration detention centre on Manus Island – and reveals, in intimate detail, one man’s experience of what it’s really like to flee tragedy and seek asylum by boat.

The Whickers were established in 2015 to fund and recognise original and innovative documentary. They seek to use the generous legacy of their namesake, pioneering broadcaster Alan Whicker, to support emerging audio and film documentary-makers in the production of authored programmes and to recognise exceptional audio that has already been broadcast.

Consultant Artistic Director for the Foundation, Jane Ray, said of this year’s finalists: “It was an incredibly strong line up again this year, with some truly international stories. Our finalists have literally come from all corners of the world to give listeners a peak into their fascinating, exciting and often tumultuous worlds. Radio is an incredibly intimate art form and the emotion that these winners have managed to create with sound is indeed worthy of high praise. I believe that Alan would have been very proud.”