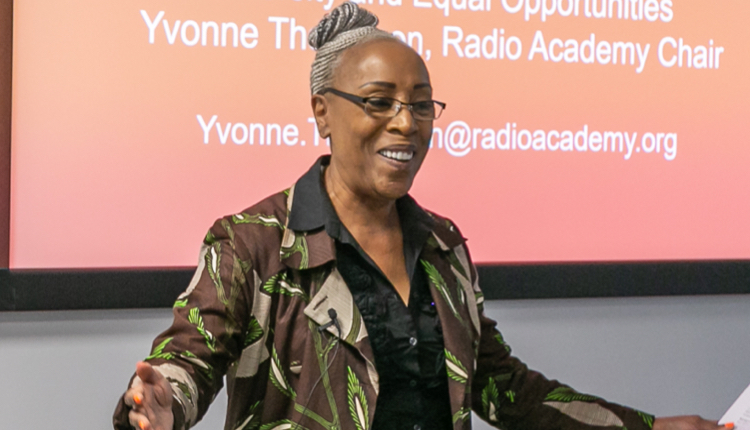 Dr. Yvonne Thompson, CBE, recently appointed Chair of The Radio Academy, is warning the radio industry must ‘diversify or die.’

She also set out her agenda for future of The Radio Academy, which included re-establishing the Academy’s profile as the leading learning and promotions body for the radio industry, establishing a physical home for The Radio Academy to become radio’s equivalent of the Brit School and exploring the benefits of the Academy becoming the Chartered Institute of Radio Broadcasting.

A 100 Women in Radio list is also on her agenda.

Yvonne’s message for the industry, warning that it needed to ‘diversify or die’ means that the industry’s future could only be secured by becoming more diverse, reflecting modern society and attracting a wider range of talent, both on and off air.

“None of this means anything unless we future-proof our industry by ensuring the talent pipeline both in front of and behind the mic, to enable us to not just survive but also to thrive. We have to widen participation in the industry through diversification.

The self-made millionaire also pointed to the recent Ofcom report on diversity in the broadcasting industries and said that the figures should be a cause for concern.

“Ethnic minority employees make up 6% of the radio workforce; but nationally are 14% of the UK’s population. Only 5% of radio roles go to people who consider themselves disabled; women occupy only 37% of senior management roles in radio, but we are 50 if not 51% of the population, and then it does not specify the intersectionality of race with gender.”

Yvonne said that the radio industry had a responsibility to reflect the society it represents, “With the changing demographic landscape of the UK, radio has to be more considerate about who they are talking to, consider the make-up of their audience, consider who the influencers are, who the trend setters are, who has the disposable incomes that will keep the industry alive and for independent stations, who makes the decisions on the household spend that advertisers want to reach? For instance, London will soon be 30% minorities. Some boroughs are already majority minorities.”

Re-establishing The Radio Academy’s position as champions for diversity, Yvonne also announced the launch of a Top 100 Women in Broadcast initiative, with more details to be unveiled in the coming weeks.

“I would like to announce that The Radio Academy’s closing event for 2018 will tip our caps to the 100th year of women’s rights to vote amongst many other things. To celebrate women in radio, The Radio Academy will be recognising the Top 100 Women In Radio, as voted for by our members.”

Dr. Thompson was previously a director and founding member of the UK’s only legal black-owned radio station, Choice FM, now Capital Extra following its sale to Global Radio in 2004.

Formerly music editor for the UK’s first black monthly glossy magazine, Root, she also wrote for publications including Music Week, as well as working at record labels Warner Brothers and CBS. She is currently managing director of marketing and PR company, ASAP Communications, president of the European Federation of Black Women Business Owners and a board member at Punch Records.