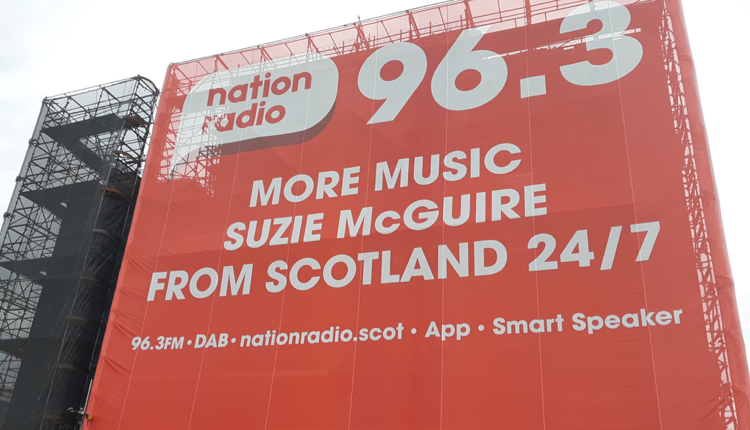 A giant billboard has been put in place advertising that Nation Radio is local from Scotland 24/7.

The huge site – said to be the biggest advertising billboard in Scotland – measures 26m x 19m and overlooks the busiest motorway junction in Scotland at the M8/M77 merge, where more than 150,000 vehicles a day travel.

Jason Bryant, the Executive Chairman of Nation Radio said: “We wanted to make a splash in announcing that we are locally-produced 24 hours a day and all our presenters live and broadcast in the area. We kept the message simple on the billboard as most car drivers will be scooting past at 60 miles per hour except during the rush hour where it’s more likely to be 10 miles per hour! We did consider putting a 20m high picture of Derek McIntyre our Breakfast presenter on the billboard but we didn’t want the passing drivers distracted by his stunning good looks!”

The billboard site is on the gable end wall of Channel 4’s news operation in Glasgow and is seven storeys high. The cost of the campaign is estimated to be a five-figure sum and it’s calculated the billboard will be seen over 7.5 million times during the campaign.

Nation Radio Scotland started broadcasting last October to a TSA of 1.8 million listeners and in its first RAJAR book achieved a weekly reach of 50,000 and 8.9 hours per listener.

Both Capital and Heart are running billboard campaigns in the Glasgow too to advertise their new UK national breakfast shows.