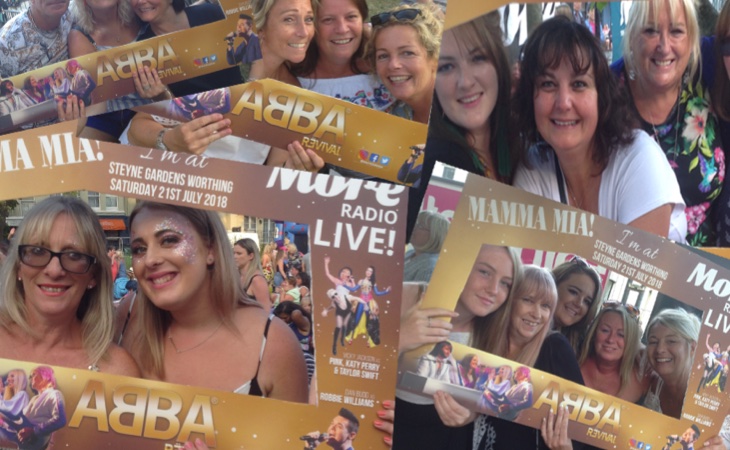 More Radio Live returned to Steyne Gardens in Worthing on Saturday 21st July and was, for the first time, a complete sellout.

The show, attended by 5,000 people, featured six hours of live music, headlined by Abba tribute Revival who returned having first appeared in 2014.

Commenting on their selection, Station Programme Controller Pete McIntosh said: “The timeless appeal of Abba’s songs, plus the release of Mamma Mia 2 the day before, made them a must have act”.

During the evening a collection was held for the Worthing Lions, who were awarded the Fundraiser of the Year award at the station’s awards show. The Lions raised just under £1,000 to assist them in supporting a variety of worthy causes in the local community.

A new interactive element added for this year was “Be in it to Win it” with the More Radio promo crew (The Street Fleet) inviting members of the capacity crowd to take selfies using the More Radio Live photo frame and uploading to social media. Later in the evening, one family earned them an instant upgrade to the VIP marquee, complete with full hospitality.

More Radio’s Managing Director Allan Moulds said: “This event continues to grow and it is fantastic for us to bring such a feel-good vibe to Worthing. It was also excellent to see ticket sales from across Sussex including new broadcast areas, such as Brighton, Chichester and Crawley, which we put down to our recent expansion on DAB across the county”.

Group Operations Director, David Cunningham, who leads the planning for More Radio Live added “it wouldn’t be possible without the huge support More Radio receives from the many local companies who support the event and the local suppliers who provide infrastructure too. Particular thanks to our lead sponsors, Saywell International, Darren Crabb Wealth Management and Team Winner Tools, plus Andy Sparsis and his team at Proto Restaurant Group who have supported us in this event every year since 2003 finally, as always, comments are gratefully received via email moreradiolive@moreradio.online.”