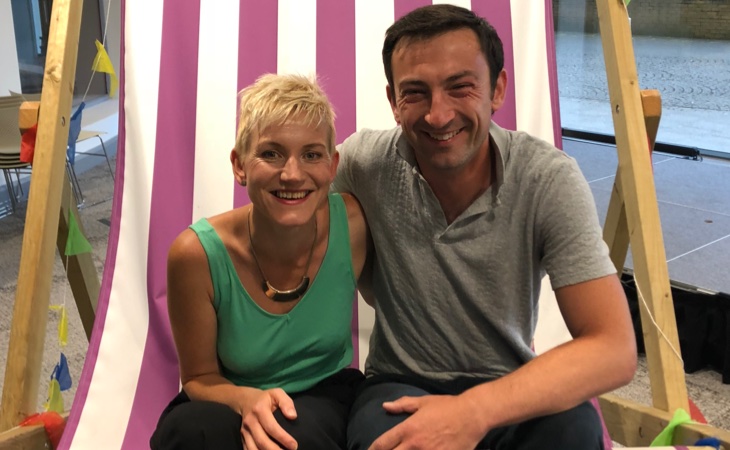 The station is also introducing an extra 18 hours of local programming per week, based around the dropping of a networked evening show.

James Piekos will start the day with an all-new breakfast show while Sally Fairfax joins the station’s daytime line-up to present the afternoon show.

James will replace Lizzie Rose and Carl Wheatley who have presented the breakfast show together for five years. Rose will go on maternity leave while Wheatley will move to a new role as the station’s new Communities Editor.

James said: “As a dad of three young children, early starts come naturally to me! This region is where I raise my family and where I call home. I can’t wait to chat to the people of East Yorkshire and Northern Lincolnshire and make sure they start each day up to date with all the news, issues and, most importantly, a smile.”

Lizzie and Carl said: “We’ve had the best five years but it’s time to hand over the alarm clock to James now. We hope James has as much fun as we’ve had, we will be listening!”

Piekos will be joined for breakfast by news and sport reader Natalie Glanvill, along with Caroline Brockelbank who will be out and about reporting live from across the region.

The new presenter of the afternoon show will be Sally Fairfax who has previously presented various shows on the station. Sally will present the show from Monday to Thursday covering arts, entertainment and history. Phil White, who presented 250 outside broadcasts as part of Hull’s UK City of Culture year, is continuing his ‘on the road’ show every Friday, hosting the programme live from a different location.

Fairfax said: “What an exciting opportunity to host BBC Radio Humberside’s afternoon programme. Our region is full of stories from talented and fascinating people who I can’t wait to meet on the show.”

Phil White will become the presenter of the Saturday breakfast show and he will also be one of the presenters on the new Tuesday evening show – Happy Campers. He will be joined by Lucy Clark who was discovered when she entered the Face of Hull competition in 2017. Lucy was also recently confirmed as the new presenter of the station’s new Sunday 3-6pm afternoon show. And completing the Happy Campers line-up will be newcomers Amazon Jackson, a comedian from Hull, and local writer Rob Ashman from Barton-Upon-Humber.

Martyn Weston, Editor of BBC Radio Humberside, said: “Lizzie and Carl have done a great job on the breakfast show over the last five years and I know they are both going to enjoy a well-deserved lie-in. I’m delighted James Piekos has agreed to set his alarm early for breakfast and I am sure our listeners will love his enthusiasm and energy. Sally Fairfax has been a firm favourite with listeners when she has filled in on various shows and I am delighted she’s joining the station’s schedule with her own programme.

“With the evening shows we’ve tried to create something different and I’m confident they will become a distinctive listen. BBC Radio Humberside prides itself on being a local station so having an additional 18 hours of new weekly local programming is fantastic news for our listeners.”

Wednesday – Fiona Mills presents Unheard and Uncensored – a new show that will explore topics that are rarely discussed on the radio. Topics that have been discussed so far include autism and adventurous lifestyles.

Thursday – Culture Night presented by new presenters Kerrie Marsh and Loren Fox. Loren is the duty manager at Hull Theatres while Kerry featured in the BBC Radio 4 series To Hull and Back.

Happy Campers will launch on Tuesday July 31st at 7pm. BBC No Filter, Unheard and Uncensored, and Culture Night are on-air. The Real Estate radio show will launch later in the autumn.

Need a new or improved logo for your radio station? Visit OhMy.Graphics and see how awesome you can look.
Posted on Thursday, July 26th, 2018 at 9:19 am by RadioToday UK

Radio Humberside gets first use of Hull Venue

Betty, from Sony Award winning Betty and Beryl, has died