Tiffany Calver takes over the Rap Show on Radio 1 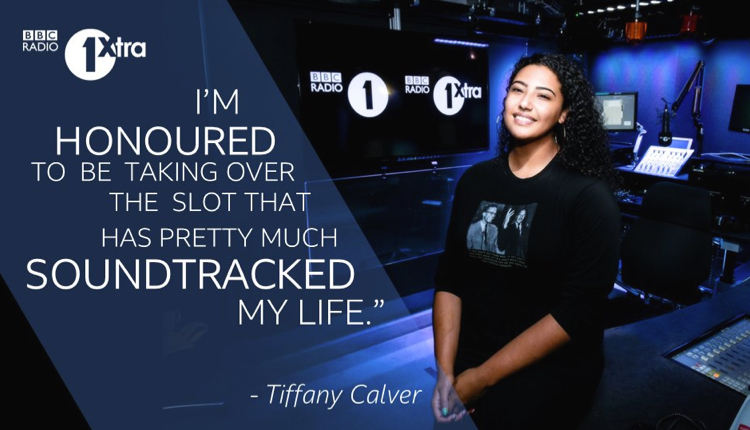 BBC Radio 1 and 1Xtra has hired Tiffany Calver to host The Rap Show, as a replacement for the recently departed Charlie Sloth.

Tiffany starts on January 5th and comes from KissFresh where she hosted the Hip-Hop show till recently.

She is the first female presenter to host the show, recently presented by Charlie and previously by Tim Westwood. Tiffany has been associated with big acts in the music scene having opened for Beyoncé and Jay-Z’s ‘On The Run’ tour earlier this year and is the official DJ for Fredo, who recently has a UK No.1 with ‘Funky Friday’ with Dave.

Her network in the music scene extends beyond the UK with Tiffany gaining the global spotlight last year when she was the first female to curate a mix for Drake’s OVO Sound radio show.

Tiffany says: “I’m honoured to be taking over the slot that has pretty much soundtracked my life. I look forward to carrying on the legacy of such a prestigious and highly respected show while also having the opportunity to add my own flavour (and sound effects) to it. This is a new beginning in so many ways; dreams really can come true.”

The Telford-born DJ started her career at Radar Radio before moving to Bauer. Tiffany has been described as ‘The future of the music industry’ by i-D Magazine.

On leaving Kiss, she said: “I entered Bauer a complete alien to the world of national broadcasting and I leave there with so many memories, achievements met and many a lesson learned. I will always be grateful for the day that you decided to take a chance on me. It’s time for me to take a chance on myself.”

?Please welcome our new host of 'The Rap Show' @tiffanycalver! ?

Thanks for the memories @KissFMUK! Here’s to a new chapter.. pic.twitter.com/QuV2Hj6Oay

? ANNOUNCEMENT ?@tiffanycalver is the new host of ‘The Rap Show’ on BBC Radio 1 and 1Xtra (Saturdays, 9-11pm) starting on 5th January ? pic.twitter.com/EU8uODDstT

Need a new or improved logo for your radio station? Visit OhMy.Graphics and see how awesome you can look.
Posted on Thursday, November 15th, 2018 at 9:58 am by RadioToday UK