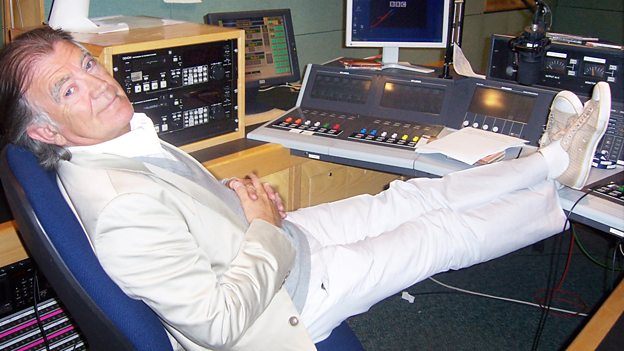 BBC Radio Foyle is marking its 40th birthday with a celebration of the broadcasting legend that was Gerry Anderson.

Gerry first walked through the doors of BBC Radio Foyle in 1984 and quickly established himself as a hugely popular broadcaster.

His programme was soon picked up by BBC Radio Ulster and Gerry went on to become a much-loved household name, before his untimely passing in 2014. The vast majority of Gerry’s treasure trove of programmes lies on the shelves of the BBC NI Archives and now a selection of some of the best from his 30-year career will be available for podcast.

Now launched on BBC Sounds and other podcast providers, listeners will receive five programmes right away on the day, followed by another two programmes every week after that.

Gerry and Sean Coyle take a tour of LA, San Francisco and Las Vegas in 1991; a bus trip with Geordie Tuft to the Ulster Museum in 2010, and an infamous visit to Lord Dunleath’s home in Ballywalter, County Down in 1988, when an antique vase was the unfortunate star of the show.

To celebrate the launch of the podcast, there will also be a brand new series on BBC Radio Ulster and Foyle.

The Anderson Archive begins on Saturday 9 March at 10.30am, featuring highlights from three decades of Gerry’s show alongside a selection of his favourite music.

Each week, Gerry and Sean Coyle put the world to rights while pondering the correct way to use a hatchet, the risks of wearing string vests, the difficulty with ladders and the reasons local men shouldn’t wear shorts. Expect music from Henry McCullough, Doris Day, Anthony Toner and Tom Petty to name but a few, and a lot of laughs along the way.

Conor McKay, who has produced both the podcasts and The Anderson Archive radio series, says: “On Gerry’s show, you never knew what was coming next. On one occasion a listener tried to find four baby chipmunks, another needed help with his love life – while a Tyrone listener needed a cure for a cow with warts on its teat.

“All human life was there, as the saying goes. We hope these podcasts and radio programmes will bring a smile to listeners’ faces. You might even get a few strange looks if you listen on your walk to work or the bus ride home, because you’ll struggle to stop yourself laughing out loud!”

Need a new or improved logo for your radio station? Visit OhMy.Graphics and see how awesome you can look.
Posted on Tuesday, March 5th, 2019 at 2:07 pm by Local Reporter