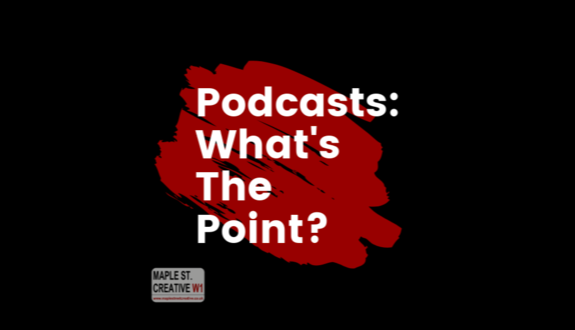 An upcoming radio event in London looks at the future of podcasting and asks: What’s The Point?.

Edith Bowman has been confirmed as the special guest for the evening, along with Total Media’s Phill Palmer, Ruth Fitzsimons from Audioboom, freelance journalist and podcaster Suchandrika Chakrabarti, plus founder and MD of Fresh Air Productions Neil Cowling.

Maple Street Studios is hosting the event as part of Radio Audio Week, and will take place at its offices on Tuesday 14th May at 5.30pm.

The event is free but tickets are only available on a first come first served basis.

In the States, podcasts are now considered mainstream, with 50% of the population having joined the audio revolution. In the UK, it’s half that.

Can you imagine a podcast over here taking out a billboard ad on Princes Street, Edinburgh, just like The Daily did on Hollywood Boulevard? Can you imagine sponsors buying ad reads at a national rate as they do with Marc Maron’s WTF? So, brands of Britain, do you need convincing where this sound thing is going?

Join us as part of Radiocentre’s celebrated Radio Audio Week, where we line-up a panel of experts and attempt to answer the ultimate question, ‘Podcasts: What’s The Point?’

Please join us afterwards for networking drinks and canapés.

Need a new or improved logo for your radio station? Visit OhMy.Graphics and see how awesome you can look.
Posted on Friday, May 10th, 2019 at 9:00 am by Roy Martin

Radio Audio Week organised for London in May