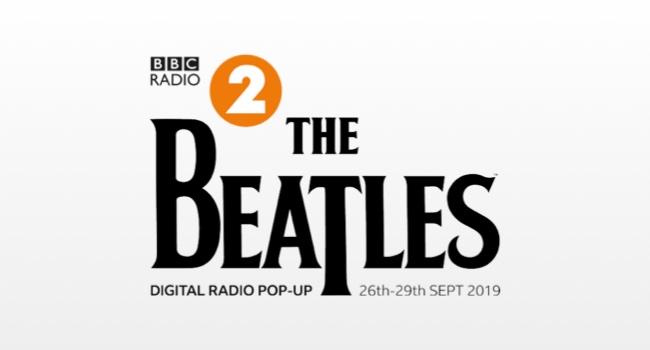 Broadcasting from Thursday 26th to Sunday 29th September from Abbey Road Studios, the station will honour John, Paul, George and Ringo as a group, as individual artists, and as songwriters. All the live shows on Radio 2 Beatles will come direct from Abbey Road – with some also simulcast on Radio 2 and BBC Sounds – and broadcast alongside pre-recorded specials and classic Beatles content from the BBC archive.

Lewis Carnie, Head of Radio 2 says: “The Beatles are woven into the fabric of UK culture. They inspired and continue to inspire artists of all generations and created some of the world’s most loved music. As their seminal album Abbey Road is 50 years old, I am delighted that Radio 2 is celebrating the Fab Four with a four day pop up DAB radio station.”

The launch of the station will be simulcast on Radio 2 and BBC Sounds, and broadcasting live from Abbey Road studios on Thursday morning, by Ken Bruce. His show will feature a special Beatles themed Tracks Of My Years and PopMaster quiz. Later that day, Jo Whiley will present her Radio 2 evening show live from Abbey Road with live performances and special guests.

On the Friday, the day kicks off with The Zoe Ball Breakfast Show, with a special Friends Round Friday including music from Rick Astley.

Later that day, Sara Cox is joined by the listeners for a Beatles All Request Friday, and that evening Friday Night Is Music Night presents The Beatles Orchestrated. Guy Garvey will be hosting, with the BBC Concert Orchestra and a guest list of artists, including Cerys Matthews, Katie Melua, Level 42’s Mark King, alongside Guy himself, all performing songs from across the Beatles catalogue. On the Saturday morning Dermot O’Leary presents his show live from Abbey Road, followed by an extra hour exclusive to the Pop-Up, where Dermot speaks to writer Richard Curtis about his recent film Yesterday.