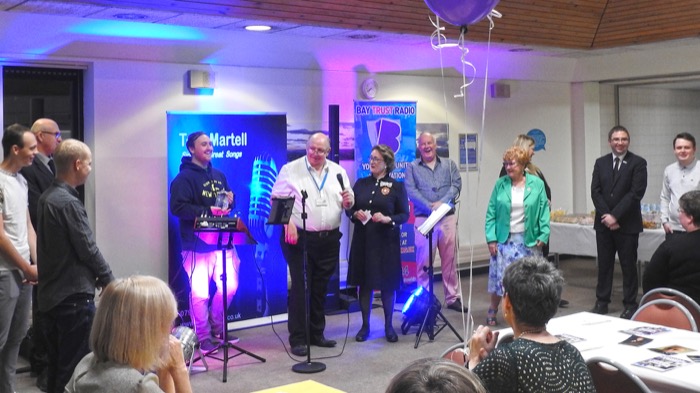 Bay Trust Radio has been presented with the Queen’s Award for Voluntary Service for providing a local service to hospitals and the local community in Cumbria and North Lancashire.

Volunteers from the station were presented with the crystal award by Mrs Susie Bagot MBE DL – Deputy Lord Lieutenant of Cumbria – at a celebration evening. The team also received a signed certificate from Her Majesty The Queen.

The event, which took place last weekend, saw local MP Tim Farron and the Deputy Mayor of Kendal Doug Rathbone speak about the importance of local radio in the area and praised the charity’s volunteers for the hard work they put in.

John Williamson, Station President, said: “I feel extremely proud of every person involved with our radio station. To be awarded with the prestigious Queen’s Award For Voluntary Service is a testament to what has been achieved by working hard, both behind the scenes and on the air, to bring the best entertainment for local people over the years.

“Every person involved with Bay Trust Radio is a volunteer who gives up their time to bring enjoyment to others each and every week. For their work to be recognised is absolutely amazing and I would like to thank them once again for their dedication to the charity.”