Mark Radcliffe gets Folk Award for 40 years in radio 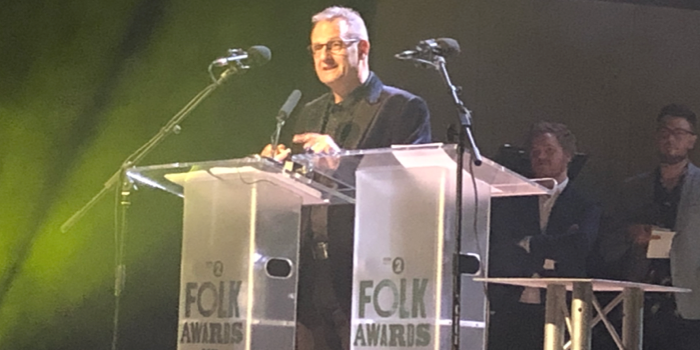 Mark Radcliffe has been presented with a special Folk Award by Ralph McTell during the BBC Radio 2 Folk Awards 2019 in Manchester.

The broadcaster got a standing ovation when the award was announced, which celebrates his 40 years in radio.

Mark started at Piccadilly Radio in 1979 as an assistant producer of drama and classical music, then in 1981 presented his first show, titled Transmission. In 1983 he become a producer at BBC Radio 1 and went on to present the Breakfast Show and Afternoon Show with Marc Riley, before joining Radio 2 in 2004 where, in 2007, he began co-hosting The Radcliffe & Maconie Show with Stuart.

And in 2011 they joined the BBC Radio 6 Music family. Mark presents The Folk Show on Radio 2 on Wednesday evenings, 9pm-10pm.

Lewis Carnie, Head of Radio 2, says: “A huge congratulations to all of the winners at the Radio 2 Folk Awards tonight. I am delighted that at Radio 2, we can keep celebrating the very best of folk music every year, and we’re honoured to have witnessed such an array of sensational performances on stage this evening in Manchester.”

The Radio 2 Folk Awards will be available to listen to for 30 days after the live broadcast on BBC Sounds. Plus, selected highlights can be heard the following week on BBC Radio 2’s The Folk Show with Mark Radcliffe (Wednesday 23rd October, 9-10pm).

The BBC Radio 2 Folk Awards are produced by 7digital.

Need a new or improved logo for your radio station? Visit OhMy.Graphics and see how awesome you can look.
Posted on Wednesday, October 16th, 2019 at 9:14 pm by Roy Martin