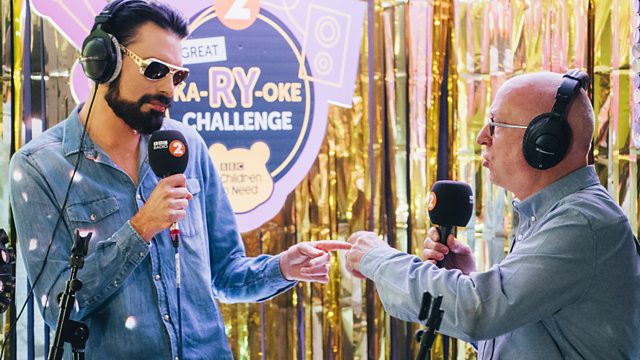 BBC Radio 2 raises over £2m for Children in Need

BBC Radio 2 has so far raised over two million pounds in aid of this year’s BBC Children in Need.

The station has held a number of fundraising events, competitions and – new for this year – a 24 hour karaoke challenge, completed by Radio 2 presenter Rylan Clark-Neal.

Rylan sang 236 karaoke songs over the course of the day and was joined by many surprise guests including Craig David, who sang his hit song – and Rylan’s favourite ever karaoke tune – “Fill Me In” live on air, Nicole Scherzinger, who sang “What’s Up” by 4 Non Blondes, Rick Astley who joined Rylan for a rendition of “Never Gonna Give You Up” and Michelle Visage, who sang “Vogue” by Madonna. Other guests included Bjorn Again, Strictly’s AJ Pritchard and Saffron Barker, Beverley Knight, Dani Dyer, S Club and Emma Willis.

The marathon sing-a-along took place at Radio 2 studios in Wogan House London and was broadcast on BBC Radio 2, BBC Sounds and streamed live on BBC Red Button and the Radio 2 website.

On hearing the total amount raised had exceeded a million pounds, Rylan tweeted “Woke up to this. No words. (Also no voice). I’m so happy. Thank you so, so much to everyone who’s donated and been a part of it all. (Literally) speechless #KaRYoke”

"It takes two baby!" 😂@RealKenBruce and @Rylan singing a duet is AMAZING!

Elsewhere on BBC Radio 2, on Children in Need Appeal Day (Friday 15th November) children from ten UK-wide BBC Children In Need funded projects took over the airwaves on BBC Radio 2 for one hour each. The young people were in charge of choosing all the music for that hour and each project also shared information with listeners about how they can provide support.

On 12th November, Radio 2 hosted a special Gala performance of Disney and Cameron Mackintosh’s musical, Mary Poppins. The performance, hosted by Zoe Ball and which took place at the Prince Edward Theatre in London starred Zizi Strallen in the title role, Charlie Stemp as Bert, Joseph Millson as Mr Banks, Amy Griffiths as Mrs Banks and Petula Clark as The Bird Woman.

The event raised £100,000 for Children In Need – with more donations still to come from bucket collections at Cameron Mackintosh’s other West End productions, including Les Misérables and Hamilton.

"You were always on my mind" 🎶

Things got emotional during @theJeremyVine and @Rylan's duet!

Last week, from Monday 4th to Friday 8th November, The Zoe Ball Breakfast Show held a text-to-win competition for listeners called ‘Rockin’ in the USA’. Every weekday, two listeners were given the chance to fly to America in the coming months, to see some of the world’s biggest names in music: Lionel Richie (in Las Vegas), Celine Dion (in Houston, Texas), The Eagles (in San Franscisco), Taylor Swift (in Los Angeles) and Elton John (in New York). The prizes included flights, luxury accommodation and extra treats along the way. Winners were also invited to be a guest on The Zoe Ball Breakfast Show on Children in Need Appeal Day. The competition raised £661,900 for BBC Children in Need.

On Sunday 17th November, Michael Ball will host his BBC Radio 2 programme live from the Savoy Theatre in London’s West End in aid of Children in Need. Michael will be joined on stage guests including Rick Astley, Bonnie Langford, the cast of his current West End show, Les Misérables, James Blunt, Alfie Boe and many more.

After the show, Michael will host an intimate lunch at the prestigious Savoy Hotel. Joining him and hosting their own tables will be a selection of Radio 2’s presenters and some of the guests from Michael’s show. All profits from the sale of tickets go to BBC Children in Need.

Helen Thomas, Head of Content Commissioning, Radio 2, says: “A huge thank you once again to the ever generous Radio 2 listeners for their continued support – helping us to raise such a large amount for Children In Need in 2019. An extra special thanks this year goes to Zoe for the fabulous Rockin’ in the USA competition, Michael Ball for his spectacular Savoy show and lunch and of course to Rylan for his heroic 24 hour karaoke challenge which alone raised £1,086,261.”

Simon Antrobus, Chief Executive of BBC Children in Need, said: “I want to say a heartfelt thank you to Rylan, Michael, Zoe and the whole Radio 2 family who have been simply brilliant. Every year we are amazed by the remarkable efforts of the incredible team at Radio 2 and their hugely supportive listeners who year on year go above and beyond to make an impact on the lives of children and young people across the UK.

“I’m so pleased that we have Rylan, Michael, Zoe and Radio 2 as part of the BBC Children in Need family. The phenomenal amount of money raised is a testament to their commitment to changing young lives – and we cannot thank them enough. Thank you.”