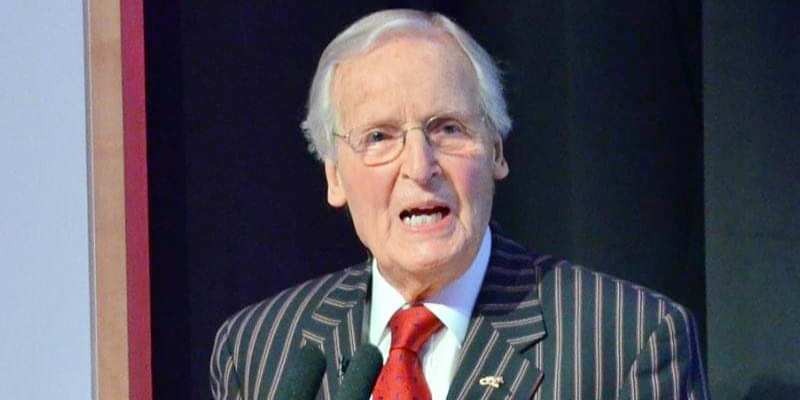 Broadcaster and BBC Radio 4 presenter Nicholas Parsons has died at the age of 96 following a short illness.

Nicholas was most popular for the Radio 4 show he hosted for 50 years, Just A Minute, and fronting game shows on TV.

The presenter recently appeared at the Radio Festival (photo above) sharing his insights and stories from 70 years of working in radio – his favourite professional medium.

He was honoured by TV and Radio writers last year at the 45th annual Broadcasting Press Guild Awards.

In 2018 he took the Gold Award at the BBC Radio and Music Awards and he was given a CBE in the New Year Honours in 2014 for charitable services, particularly to Children’s Charities to add to his OBE for services to drama and broadcasting he got a decade earlier.

It was on December 22nd 1967 that Nicholas hosted the first edition of Just A Minute on BBC Radio 4, a role he has carried out ever since, missing only a couple of recordings until recently. In 1971, he also became host of the ITV gameshow Sale of the Century, which he presented for 12 years.

Other broadcasting highlights have included appearances in The Comic Strip Presents (Channel 4), Doctor Who (BBC One) and hosting Have I Got News For You (BBC One).

Tony Hall, BBC Director-General, paid tribute: “Very few people have done so much to entertain audiences over the decades, and no one deserves to be called a broadcasting legend more than Nicholas Parsons. His charm, inventive intellect and ability to create laughs were unsurpassed. Our thoughts are with his family and all who knew him.”

Mohit Bakaya, Controller of BBC Radio 4, said: “Nicholas Parsons was one of the greats, a first class broadcaster and an icon in the world of British comedy.

“Nicholas always brought his sharp wit, brilliant poise and warmth to everything he did – but particularly as host of Just a Minute where his excellence shone in each episode without hesitation, deviation or repetition. He was that rare beast – a presenter whose appeal spread right across the generations – and he was a unique member of the Radio 4 family. He will be greatly missed by us all, as well as the many, many listeners who he entertained so brilliantly.”

Julia McKenzie, Creative Director at BBC Studios Audio (which produces Just a Minute), said: ““Nicholas was such a smart and passionate man who cared deeply about his radio show and Radio 4 and its devoted listeners. He was utterly charming and faultlessly professional.

“He was funny and kind in person and wonderful company. I can’t really believe he is gone today, he seemed indestructible. His legacy will live on with over 50 years of laughter-filled shows and the lasting friendships he made through his extraordinary career in show business. My thoughts are very much with Annie, his beloved wife and constant support and companion who attended every recording, and the rest of his family. Nicholas, you dear man, what a full life you lived – you really did bring much wit and joy to us all and we thank you for that – we miss you.”

So sad to learn of the death of Nicholas Parsons, though at 96 it was a pretty impressive innings. I last saw him a year ago and he was in great form. A more friendly, generous, polite and solicitous person you could not hope to meet.

Oh no. Nicholas Parsons gone? He ruled Just a Minute for Just a Lifetime. A stunning achievement: never scripted, always immaculate. From comedian's sidekick to great institution, via Sale of the Century & much more. Unrivalled continuity, professionalism & commitment. Farewell x

Very sad to hear that the wonderful Nicholas Parsons has passed away.I knew him for years and have always been a big fan.on his 90th birthday we gave him a Superman Dressing Gown which he told me he loved. He was a superman and a great entertainer.I will miss him very much.

The sound of the final whistle. Nicholas Parsons was truly the kindest and most generous person I’ve ever worked with. His continued delight at being a part of show business should be an inspiration to us all! Huge love to his wife Annie and his whole family. #ripnicholasparsons

RIP Nicholas Parsons, 96.
A wonderful man who brought so much fun, charm, wit & pleasure to so many millions of people over so many decades. What a life. pic.twitter.com/3ZoRKQDOqQ

Without hesitation, deviation or repetition I’d like to say that Nicholas Parsons was a broadcasting giant who proved that the straight man could be the real star of comedy. Will be hugely missed by all who work at & love @BBCRadio4 https://t.co/8r2hyMMXRY

RIP the lovely Nicholas Parsons, who passed away at 1am this morning at the grand age of 96. A charming, kind and generous man who will be sadly missed by all of us privileged enough to know him.

I'm so proud to be in this photo working with someone I'd respected and admired through Just a Minute for most of a lifetime. (Favourite acting role was his evil quizshow host in Time Bandits.) RIP Nicholas Parsons. You were an inspiration. Thank you for being part of #GoodOmens. pic.twitter.com/Y0CKgd6AKV

It is with deepest regret we announce the passing of Nicholas Parsons who guest starred as Reverend Wainwright in the 7th Doctor adventure, The Curse Of Fenric. #DoctorWho pic.twitter.com/tB8LjBAkxj

The end of an era. Nicholas Parsons was such a lovely man – and so versatile: actor, entertainer, writer, TV star & radio host without equal, but for me, most of all, friend. I knew him for more than 50 years: he was simply the best. Thinking of his wonderful wife Annie & family. pic.twitter.com/p1Dl1rWqfJ

Nicholas Parsons has passed away.

Just last year, at the age of 95, after winning a lifetime achievement awards at the Broadcasting Press Guild Awards, he did a 20 minute impromptu comedic routine with joke after joke after joke. He had the whole room’s attention. What a guy.

The BPG is sad to hear of the death of 2019 Harvey Lee Award winner Nicholas Parsons. pic.twitter.com/jhPdjDVOoC