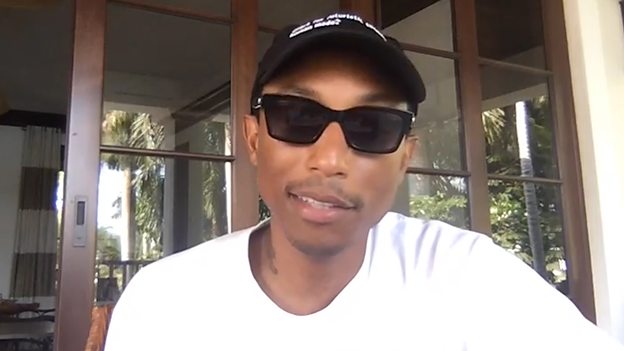 Pharrell’s Happy has been named the No 1 track in the Most Played Songs of the Decade programme broadcast on BBC Radio 2.

Scott Mills counted down the Top 40 songs that have been played the most on UK radio and television since 2010, on Bank Holiday Monday from 2-5pm.

Pharrell recorded an exclusive video message just for the programme in which he says: “Thank you, thank you. It is incredibly humbling to think that Happy is the most played song across radio in the UK for the past decade.

“When I was a little boy hearing those letters, UK, and thinking about the culture and seeing all of my favourite artists that I loved as a child go over and perform big concerts and festivals – I just never ever thought that anything that I would ever do would be part of that history.

He continues: “I always want people to hear my songs, as many people as possible, people that really need it. It’s cool when it happens and that you have radio stations that want to play your songs. It really means a lot to me and my career.

“None of it matters if we don’t have you guys on board. This is a crazy time and I know we listen to songs to help us get through things and if any of my music could have ever helped you in this way, I am very grateful. Thank you.”

It's official. @Pharrell's 'Happy' is the UK's most played song of the last decade! ? Here's how he reacted to the news…

Scott Mills says: “Every single tune I play on the show is an absolute banger that you’ll have known and loved then learnt every word to over the past ten years, and I play the entire Top 40 in full. So get ready to collectively sing your heads off. I’ll certainly be doing just that, but thankfully off-mic.”

The Top 40 Most Played Songs also reveal interesting facts and trends about the songs on our airwaves:

Jeff Smith, Head of Music, Radio 2, says: “BBC Radio 2 plays the best of the best pop music, and our Most Played Chart of the last decade is packed with universally loved, singalong pop hits that really do stand the test of time. So do tune in to our unique Top 40 countdown on Radio 2 and BBC Sounds!”

Peter Leathem, Chief Executive Officer at PPL, says: “PPL is delighted to provide the BBC with data for this incredible chart of the decade. The top 40 most played songs are the sounds that radio producers and broadcasters have consistently played throughout the last decade and will evoke many memories for all of us. Congratulations and thank you to all those who feature in our Most Played Songs of the 2010s chart.”