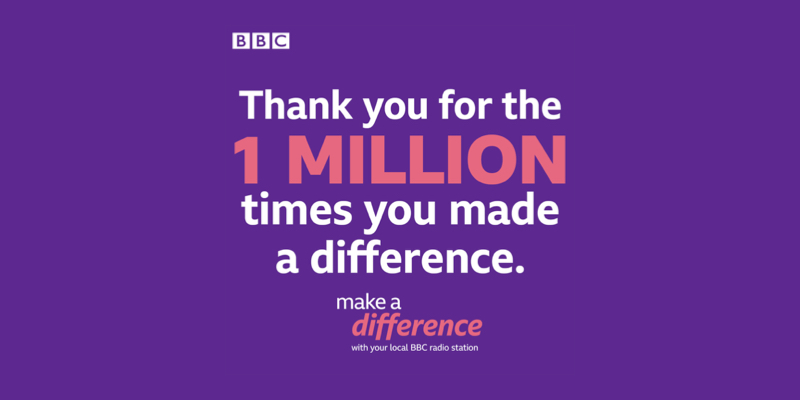 The BBC is reporting that over a million people have either called or messaged their local BBC radio station during Lockdown.

The 39-station network set up the Make a Difference campaign – a virtual notice board for those offering help and those needing support – back in March.

All local stations are also still operating a revised schedule of mostly four-hour blocks of programmes, meaning some presenters are either leaving the network or being furloughed.

The standardised coronavirus schedule is expected to be in place until at least April 2021, RadioToday understands.

Here are some of the highlights of the MAD project:

It was the BBC Three Counties Radio Make A Difference team who first shared the story of Captain Tom Moore. He captured listeners’ hearts when he set out to do 100 laps of his garden before his 100th birthday to raise money for the NHS. Soon the rest of the world was cheering him on too helping him to raise over £33million.

In Essex a couple and their five pets were left camping out in the garden after their house caught fire, after a call to their local BBC station they moved into a house that evening.

On Radio Devon a key worker named Bob phoned in and said he was down to his last pair of decent shoes after walking five miles a day to work. With no internet access or shops open, he couldn’t find a new pair but a listener soon called in with a pair of size 12s to drop off for Bob.

Radio Solent helped listener Hannah set up a virtual 70th wedding anniversary party for her great grandparents. An appeal on BBC Radio Tees resulted in two tablets being donated to James Cook Hospital so patients in palliative care can safely be in touch with their loved ones from their hospital beds.

BBC Radio Leicester tracked down Grace the nurse who helped an elderly widower in hospital with Covid-19 have much-needed Facetime chats with his family. The station got Grace on air so the family could thank her for everything.

Chris Burns, Head of BBC Audio and Digital says: “Radio has the power to bring people together and while COVID-19 is a global pandemic, its impacts had been very localised and local radio has been uniquely placed to respond. The number of calls we continue to receive shows the power of community and the contribution local radio can make by getting closer to its listeners. We maybe emerging from lockdown but I want MAD to stay.”