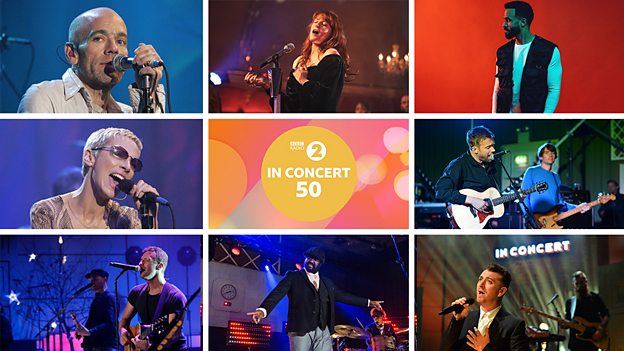 BBC Radio 2 is marking 50 years of pop music performances on the BBC with In Concert 50.

From Fleetwood Mac and Bill Withers in the 70s to Craig David, Florence and the Machine and Sam Smith in the 21st Century, In Concert on the BBC in sound and vision has charted the history of popular music and this month of special archive shows and performances looks back across 50 years.

From Sunday 1 November, all 50 performances are on BBC Sounds, with a special 10 artist Box Set available to watch on BBC iPlayer.

BBC Four broadcasts Dido (Friday 30 October) and Seal (Friday 13 November) as TV-first In Concert exclusives. Dido performs at the BBC’s Maida Vale Studios from 2019, featuring tracks from No Angel, Life For Rent and Still On My Mind. Seal is from the BBC Radio Theatre in 2015, performing tracks from his album 7 and hits including Kiss From A Rose and Crazy.

And Radio 2 presenters are curating their own favourite tracks of all time from In Concert 50 to play during shows across the month and in special programming on the station.

In Concert presenter, Jo Whiley, says: “As the presenter of In Concert it’s been an absolute thrill to watch some incredible performances by the hugest of music legends in the tiniest of intimate venues. But there are many more that I’ve not yet seen and that is the joy of In Concert 50.

“Nowhere but the BBC has such a unique archive of music performances from some of the most important artists of the 20th and 21st centuries.”

Jeff Smith, Head of Music, Radio 2 and 6 Music, says: “We are all missing going to see live music at the moment so this November, even though we cannot stage a full scale In Concert season at Radio 2, we can celebrate 50 years of In Concert performances that we think audiences will love from the BBC’s In Concert vaults.

“It really is a unique collection from some of the world’s greatest musicians to hear on Radio 2 and BBC Sounds and watch on BBC iPlayer. I have so many special memories from these performances, I can’t wait for audiences to enjoy these performances once again.”

Need a new or improved logo for your radio station? Visit OhMy.Graphics and see how awesome you can look.
Posted on Monday, October 26th, 2020 at 12:43 pm by RadioToday UK