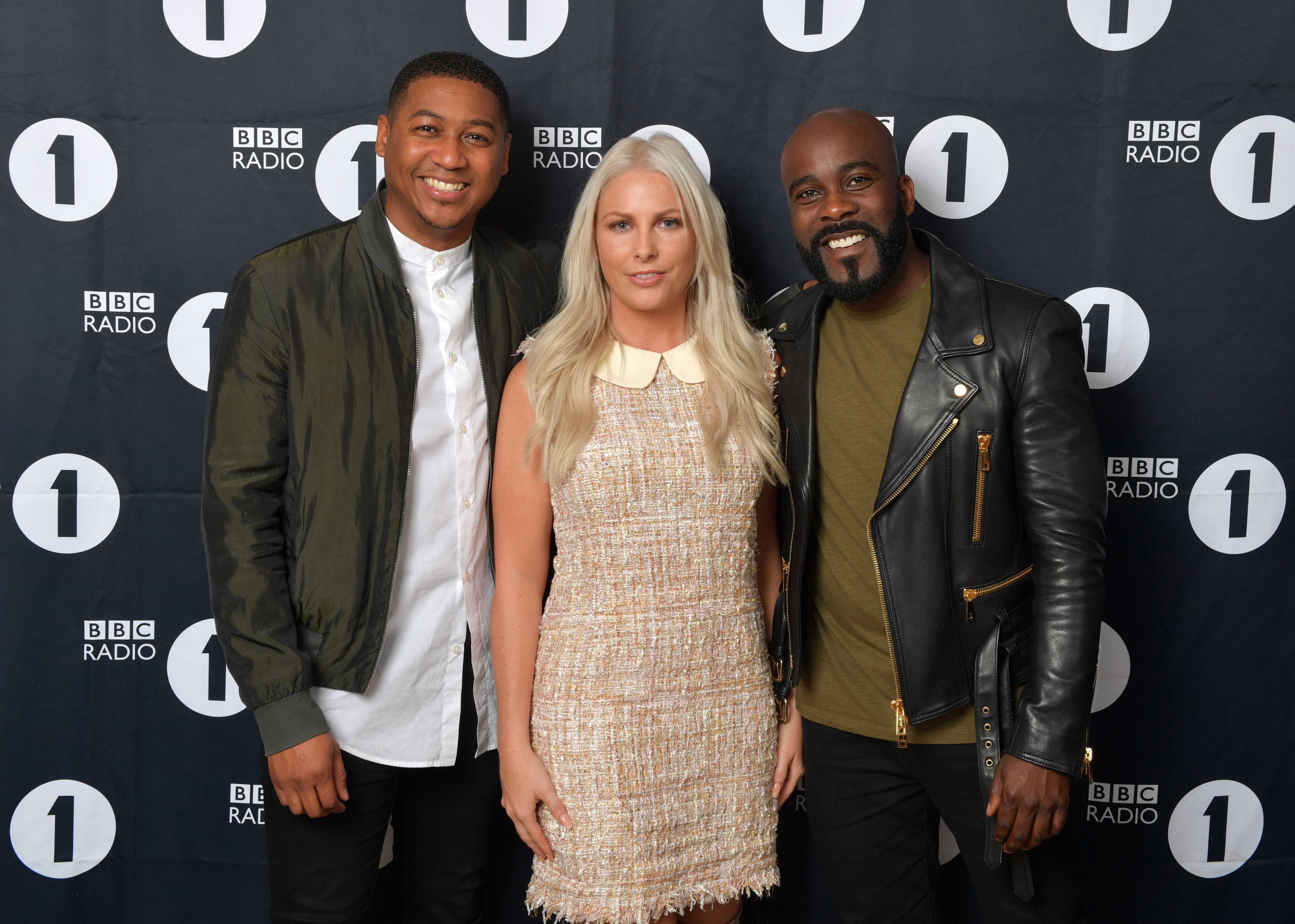 Rickie, Melvin and Charlie are taking over the mid-morning show on BBC Radio 1 as Clara Amfo moves to the 6pm new music show, Monday to Thursday.

Annie Mac has also announced she is leaving the station after almost 20 years at the BBC. She joined as a broadcast assistant in 2002 and hosted her first show in 2004.

In other changes, Radio 1’s Future Artists with Jack Saunders will move forward into a new, earlier slot (8pm-10pm, Monday-Wednesdays) as will Radio 1’s Indie Show on Thursdays. Meanwhile, Radio 1’s Powerdown Playlist (previously a weekly fixture in Radio 1’s Future Sounds) will become a standalone show for the first time, with Sian Eleri at the helm.

Danny Howard, who joined Radio 1 after winning the station’s Superstar DJ talent competition back in 2011, will take over as host of Radio 1’s Dance Party (Fridays, 6pm-8pm).

Jaguar will land her own show on Radio 1, taking on the 10pm-11pm slot on Thursdays with Radio 1 Dance Introducing while brand new presenter Sarah Story will join Radio 1 to take on the Friday 8pm-10pm slot with Radio 1 Future Dance.

Radio 1 will also be saying goodbye to Diplo, who currently occupies 11pm-1am on Saturday nights with Diplo and Friends.

Radio 1’s Soundsystem will move to occupy the slot on Saturday evenings, 11pm-1am, while Radio 1’s Residency will move to Thursdays 11am-1pm.

Clara Amfo says: “Presenting mid mornings and The Live Lounge on Radio 1 has been one of the most edifying and special times of my career and personal life. As a nation of music lovers, the experience of it live is nothing short of magical and to have had the honour of welcoming some of the world’s most beloved and emerging artists in to The Live Lounge has created unifying moments that I and the listeners will never forget!

“I am beyond honoured and ready to start this exciting new chapter on Radio 1. I’m such a fan of this show, the artists that is has championed and to be receiving the baton from Annie who I love and respect makes it extra special for me. Massive big up to every single one of my daytime producers and The Live Lounge/smug life listener crew, I have loved hearing your stories and enjoying keeping you company with tunes in daytime and look forward to continuing that in September, so see you a few hours later!”

Rickie, Melvin and Charlie say: “To be given the opportunity to present the Live Lounge is just an absolute dream, a show we all adore and have so much love, passion and respect for. Celebrating great artists playing their new and live music on Radio 1 is a huge honour and we can’t wait to put our RMC twist on it! Much love to Clara who has done an amazing job over the years and thank you for passing the baton – we promise not to break it!”

Aled Haydn Jones, Head of BBC Radio 1, says: “Clara has long been one of the most influential voices in the music industry. She has an incredible affinity for discovering new music, which makes her perfect to be the face of it for the industry and for Radio 1. We know our listeners will love what she brings to the show. I’m delighted that we’ll have Rickie, Melvin and Charlie taking on the late morning slot: their energy, knowledge and passion is going to make for an exciting new sound for the Live Lounge.”

Jack Saunders says: “I can’t believe the journey keeps getting more exciting. I love being on Radio 1 and to be given an earlier slot is so sick. I live and breathe this show and the music around it so to be on at 8pm-10pm is only going to empower the music I play and the energy I give it. Thank you to Aled and Lorna for believing in me. I can’t wait for September!”

Sian Eleri says: “Doing the Chillest Show and getting to know the Radio 1 listeners every Sunday is such a privilege, so I’m thrilled to keep the chilled sounds coming Monday – Wednesday too. Bring on September – can’t wait!”

Danny Howard says: “I’m beyond excited to say these words… 6pm, every Friday will be home of the hottest dance and electronic music on the planet, think superstar guests and festival-sized bangers on the world’s biggest dance floor, providing you with all the energy you will ever need to get your weekend started properly!

“Thank you to everyone who’s listened to my radio shows so far, your support is amazing and I’m absolutely honoured to be taking the reins of this legendary slot. We’re gonna have some party, every single Friiiiiiiday!”

Jaguar says: “I love that over the past year BBC Introducing Dance has become a centrepiece for emerging dance talent to be discovered. I’m proud to give these artists a bigger platform to grow, and I can’t wait to discover the next big dance acts of the future!”

Sarah Story says: “‘I’m so excited to join the Radio 1 family on Friday nights with a brand new show, Future Dance! Friday nights on Radio 1 are iconic and they have not only influenced me as a broadcaster but as a music lover. It’s an honour to be able to showcase the incredible dance music talent that we have coming through and I cannot wait to get started!’

Annie Mac says: “After 17 wonderful years I have decided it’s time to leave Radio 1. This second home has been the thread that has run through nearly my whole adult life; I have grown up, fallen in and out of love, moved homes, climbed up the career ladder, got married and become a mother twice over. I have done this alongside you, my listeners, who have done your own versions of the same. I will be forever grateful to you all for welcoming me into your days. I have never not walked out of the studio feeling lighter and happier than when I walked in and that is all down to you. Working at Radio 1 has been like being at the best party ever and it is a wonderful feeling to be leaving with a huge smile on my face. Thank you, thank you, THANK YOU!”

Diplo says: “After nearly a decade of showcasing the world’s best new music, I’ll be wrapping up Diplo and Friends on Radio 1 in September. Big thanks to everyone at the BBC – stay close for more projects during 2021 and into next year.”

Aled Haydn Jones (Head of BBC Radio 1) says: “Annie Mac is quite simply a legend, and has been a hugely important part of the station for the past 17 years. Diplo has brought some of the biggest names in dance to our listeners on Diplo and Friends, showcasing some now iconic mixes during the show’s run. I’d like to thank both Annie and Diplo for all they’ve done for the station, and I wish them all the very best for the future.”

Annie Mac will be leaving Radio 1 after more than 17 years at the station. Annie has fronted some incredible moments on @BBCR1 from live sessions to landmark interviews with the world’s biggest artists. Thanks for everything @anniemacmanus and all the very best for the future ❤️ pic.twitter.com/2ZUyixdtSn

Radio 1 will also be saying goodbye to Diplo, who currently occupies 11pm – 1am on Saturday nights with Diplo and Friends, delivering exclusive mixes featuring some of the hottest names in Dance. Thanks for everything @diplo 👏 pic.twitter.com/qTI31U3fxm

The changes to the Radio 1 schedule from September 2021 can be found below. Outside of these times the schedule remains unchanged.

It's easy to put travel news on your radio station, from £25 a month for online stations. See RadioTravelNews.com for details and same day set up.
Posted on Tuesday, April 20th, 2021 at 9:45 am by Roy Martin