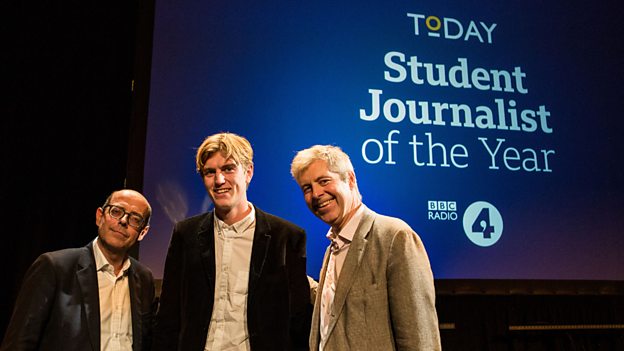 The winners of the first Today Student Journalism Awards have been announced at an awards ceremony held at the BBC Radio Theatre.

On being named Today Programme Student Journalist of the Year, Jack Hunter said: “I’m totally stunned and thrilled to have received this incredible opportunity.”

Sarah Sands, editor of the Today Programme and chair of the judges, commented: “Jack Hunter has an excellent nose for a story and a talent for digging that drives his investigations. His work holds those in authority to account and demonstrates exactly the qualities and potential the BBC looks for in a journalist at the start of their career.”

The Today Programme Visual Journalist Of The Year, as shortlisted by Nick Robinson and Isabel Hardman of The Spectator, was awarded to Peter Flude, Falmouth University. Venetia Menzies, Westminster University received special commendation and Louis Ashworth, Cambridge University was shortlisted.

The Today Programme Student Publication of the Year, as shortlisted by Mishal Husain and Charlie Cuff of gal-dem, was awarded to The Boar, Warwick University.

The Today Student Programme of the Year, as shortlisted by Justin Webb and the columnist Janice Turner, was awarded to ‘Sombremesa’ Exeter University.

Commenting on the awards, Sarah Sands said: “Student journalism is thriving in the UK. The judges have seen in-depth investigations, moving personal stories, razor-sharp reviews, and a fair dose of wit and mischief. It’s been inspiring to see so much creativity and diversity among the next generation of journalists, and we’re looking forward to helping some of them develop their careers here at the Today Programme.”

The Today Student Journalism Awards are in their inaugural year and sought to find students and publications that embody the BBC’s values of impartiality, trustworthiness and excellence, and who had shown they can serve the needs and interests of a student audience.

The awards aim is to champion new talent and also recognise the Today Programme’s long connection with student audiences.

Lights out at UK radio stations for WW1