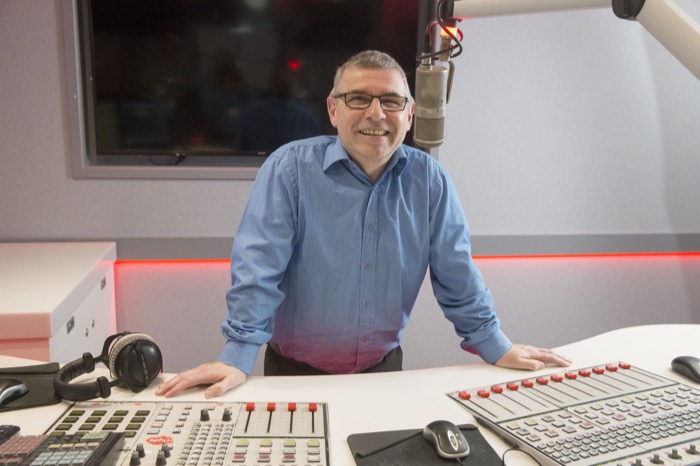 West Sound Breakfast Show presenter Tommy Jardine has announced he is to retire after 10 years in the slot.

Kenny Campbell, currently presenting the Home Run from 3pm to 7pm on weekdays, takes over the breakfast show and Michael Smith takes the reins of Kenny’s show from the 1st of April.

Tommy, originally a professional auctioneer to trade, having been a co-director with Jardine (Auctioneers) Ltd. started his radio career in 1996 with West Sound on an evening show called “The Back Shift”, broadcasting from Campbell House at the Crichton.

After experiencing all aspects of the radio business including sales and sponsorship, he took on the role of Charity Manager for the station’s charity – Cash for Kids.

From the first event at the Cairndale Hotel in 1999 which raised £6,000 he guided the fundraising total to a massive one million pounds in 2015. He then stood down as Charity Manager and was honoured to be the first Charity Ambassador for the charity in Dumfries & Galloway.

Tommy said: “They say a second is a long time in radio, but the past 20 years have passed so quickly. I have met and worked with some wonderful, talented people and I can now look forward to some long lies and spending more time with my wife Margaret and our two Westies Hamish and Bonnie.”

Graham Bryce, Group MD, Greatest Hits Radio Network said: “I would like to hugely thank Tommy for his incredible contribution to West Sound over the years. From raising huge amounts of money for our charity Cash for Kids to waking up Dumfries and Galloway for the past ten years, his enthusiasm, passion and connection to the community will be sorely missed.

“However I do know he is looking forward to putting his feet up and having a long lie in. We wish Tommy and his wife Margaret all the very best for their retirement.”

Need a new or improved logo for your radio station? Visit OhMy.Graphics and see how awesome you can look.
Posted on Wednesday, March 27th, 2019 at 2:33 pm by Local Reporter