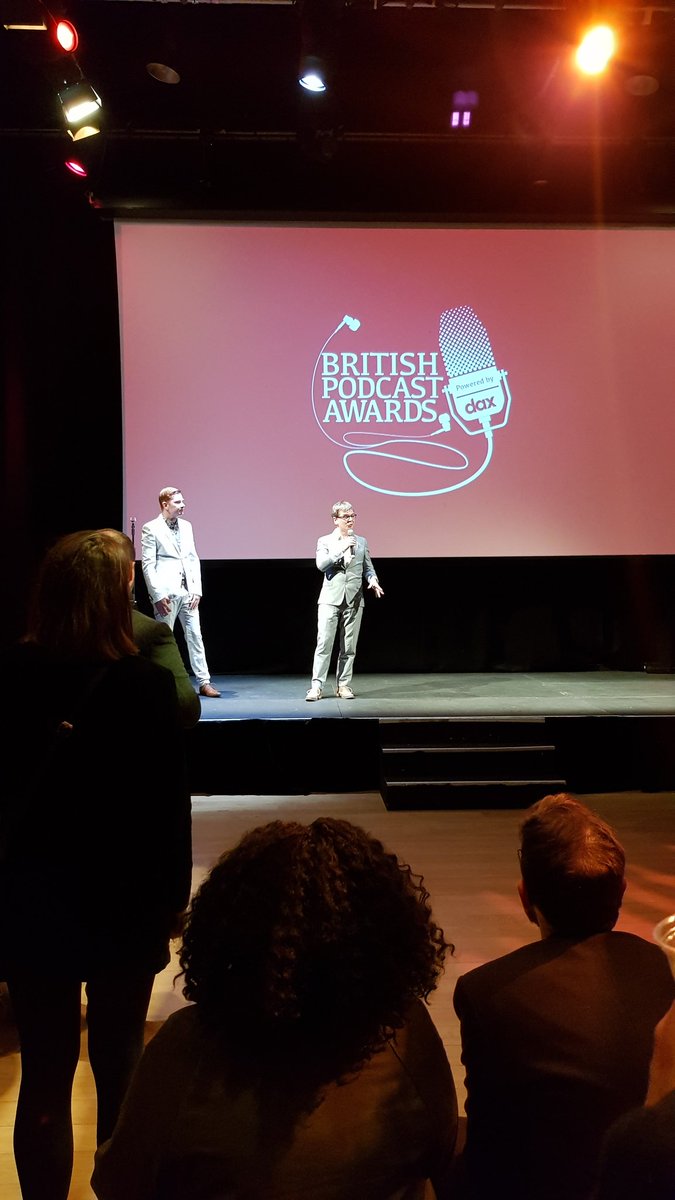 BBC Radio 5 Live’s Brexitcast has been given the Listeners Choice Award at the British Podcast Awards.

Chris Moyles and Kermode and Mayo made the top five list too, with The Chris Moyles Show on Radio X coming in 4th place and Mark Kermode & Simon Mayo coming in 5th.

All the winners were announced at the awards ceremony on Saturday night in London’s Kings Place, hosted by Cariad Lloyd.

George The Poet was the stand out winner of the night, walking away with five awards, including Smartest, Best Arts & Culture, Best Fiction, Best New Podcast and was named Audioboom’s Podcast of the Year.

You, Me and The Big C was awarded Acast Moment of the Year, with presenters Lauren and Deborah joined on stage by Steve Bland, who’s wife, BBC Radio 5 Live presenter Racheal Bland, died from cancer whilst recording the podcast.

Earlier this year, BBC Radio 5 Live announced The Rachel Bland New Podcast Award in her memory. The first recipients of this award were announced at tonight’s ceremony as Melissa, Jade and Selvi for their warts-and-all look at the reality of addiction through the eyes of three addicts. Their new podcast idea will now be made by BBC Sounds.

With over 160 million downloads, the podcast has moved from our headphones and onto a worldwide sell out tour and it’s own HBO show. Their award was presented by special guest, BAFTA award-winning actor Michael Sheen, who’s such a big fan of the podcast, he appeared on one episode.

The coveted Listeners’ Choice Award supported by BBC Sounds went to Brexitcast, a show full of geeky gossip about Brexit from Westminster and Brussels. Launched in June 2017, the podcast has been going on longer than anyone anticipated, with Laura Kuenssberg, Chris Mason, Katya Adler and Adam Fleming calling in from wherever they are in the world each week, to try and decipher for it’s listeners exactly what is going on with Brexit.

Dustin Lance Black can place a Podcast Award next to his Academy Award, as he walks away with Best Family Podcast for Surrogacy: A Family Frontier, a podcast exploring attitudes towards surrogacy and his own journey to parenthood.

Over 190,000 podcast listeners voted for their favourite podcast, with the full top 5 revealed on the night:

Audioboom Podcast of the Year
HAVE YOU HEARD GEORGE’S PODCAST?
George The Poet

Acast Moment of the Year
YOU, ME AND THE BIG C
BBC Radio 5 Live

Best Fiction
HAVE YOU HEARD GEORGE’S PODCAST?
George The Poet

Smartest Podcast
HAVE YOU HEARD GEORGE’S PODCAST?
George The Poet

Need a new or improved logo for your radio station? Visit OhMy.Graphics and see how awesome you can look.
Posted on Saturday, May 18th, 2019 at 11:14 pm by Roy Martin

Nominees for the British Podcast Awards 2018

Fathers and Sons named Podcast of the Year

Nominations out for British Podcast Awards