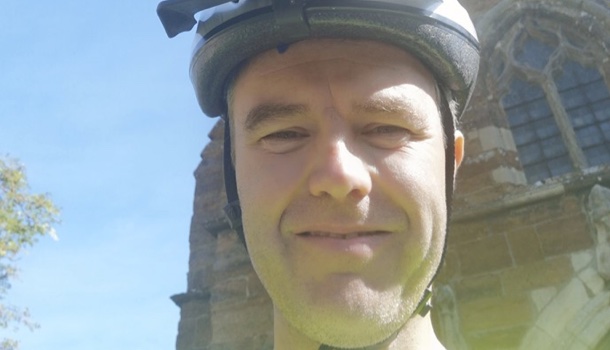 Rutland Radio presenter gets on his bike to raise money

The breakfast show presenter took part in Ried and Stride, a national event where people cycle, walk, drive or even horse ride between Churches, to raise money for their upkeep.

This year’s High Sheriff in Rutland planned a route around the county to take in 23 churches in 10 hours over 64 miles. Co-rider Margaret Miles managed it and Rob joined her on the morning part of her journey, cycling 40 miles and visiting about half of the stops.

On his achievement, Rob said: “For me it was a perfect way to connect with some of our more remote villages, they were listening to my progress as I reported in on the radio from every stop. And even more special as Saturday the 14th of September was Rutland Day, what better way to celebrate the county than by peddling round in the sunshine?  It was the first time I’d joined the Ride & Stride; it happens in Rutland every two years.”

Rob’s cycle buddy Margaret added: “Please thank all those who ‘manned’ the churches well ahead of the official time. We had not expected to be met at early morning places but in fact we met someone in EVERY church: Pickworth, Essendine, Ryhall, Little Casterton, Great Casterton….all before 9am! What stars.”

In 2017 the event raised around £20,000, it is hoped that once counted, the fundraising from this year will be of a similar amount.