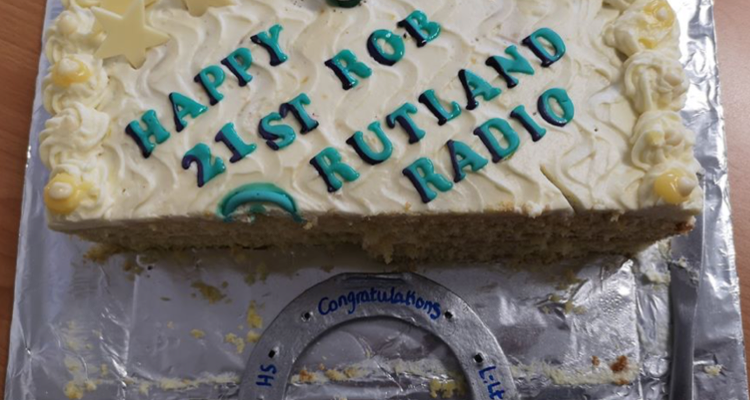 Rutland Radio has celebrated 21 years of broadcasting by giving away £21 an hour to those who answered questions about 1998 and the radio station’s early days.

Rob Persani has presented the station’s breakfast show since it launched and during the final hour of his show on Friday he was interrupted by a party of colleagues, family and officials from the Rutland community who burst into the studio singing Happy Birthday, armed with a 21st Birthday cake and a commemorative horseshoe which is the symbol of the county.

And later in the day, he pushed the plunger on Nene Valley Railway’s Winter Lights Spectacular which launched that evening.

Rob said: “After taking over from our overnight team who’d been live all night on our election special, and so many Birthday wishes from listeners, I was already quite emotional at how much we are valued by our listeners and advertisers. For everyone to gather together to surprise me truly was the icing on the cake!”

Rutland Radio is part of the Lincs FM Group which was bought by Bauer earlier this year, and is currently trading in Hold Separate pending investigation on the purchase by the Competition and Markets Authority.