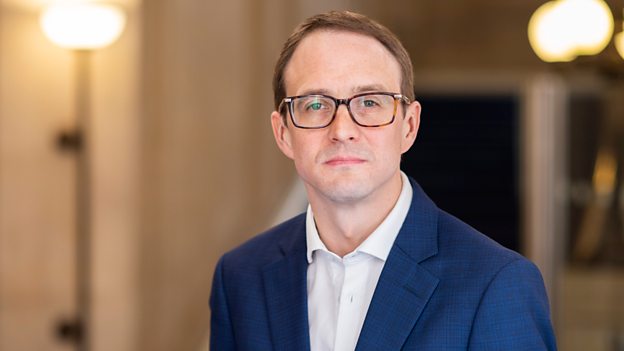 Chris – whose day job is as a political correspondent for BBC News – will take over from 18th October. Jonathan stepped down in June after 32 years hosting the programme.

Any Questions? features a panel of people from across politics, media and elsewhere answering questions on the big topics of the week. It broadcasts from a different town or city each week.

Chris is a regular voice on BBC Radio 5 Live and Radio 4 as well as BBC television. He has covered as a presenter on programmes including The World Tonight and PM on Radio 4, as well as Question Time Extra Time, Drive and Breakfast on 5 Live. He’s also one of the founding hosts of the BBC Brexitcast podcast, which also now airs in-vision on Thursday nights on BBC One.

Chris Mason says: “I’m beyond excited to be the next host of Any Questions? To be taking over from someone called Dimbleby of the broadcasting dynasty is pinch yourself stuff. There isn’t a better point in my lifetime to take on this role. I believe passionately it’s the job of the BBC to scrutinise, allow audiences to ask questions of politicians and to have serious but informal conversations so that those in power can be seen in three dimensions. On a discussion programme like Any Questions? audiences and listeners can understand not just what someone thinks but why they think that way. That isn’t always possible in other places but it’s vital in today’s battle of ideas. It aids political conversation and informs what we all understand about what’s happening in the UK and around the world.”

Mohit Bakaya, Controller of Radio 4, says: “Chris is a first class political correspondent and, for some years now, his ability to interpret and explain the complexities of what’s happening in our fast changing political landscape has made him one of our most trusted and insightful journalists. He approaches Westminster with the eye of an ‘outsider’ which makes him well placed to connect with audiences around the country. As we face another period of political uncertainty, Any Questions? and its role in giving people the chance to ask questions of our politicians is as vital as ever. It was a presenting role sought after by a number of brilliant broadcasters that I have the highest regard for. I’m delighted Chris is the new host.”

Prior to his role as a political correspondent at Westminster, Chris was 5 Live’s political reporter and has also had roles as a producer on 5 Live Drive and reporter at BBC Radio Newcastle.

Chris’ predecessor in the job, Jonathan Dimbleby, wrote on Twitter: “Just heard #chrismason is my successor in the #anyquestions chair. Great choice for great job. Fine political journalist who inhabits the Westminster bubble but has feet firmly planted outside. Tough, clever and witty. Listeners will relish him as much as he’ll relish the role.”

Just heard #chrismason is my successor in the #anyquestions chair. Great choice for great job. Fine political journalist who inhabits the Westminster bubble but has feet firmly planted outside. Tough, clever and witty. Listeners will relish him as much as he'll relish the role.

Huge congratulations to @ChrisMasonBBC for getting the 'Any Questions' gig. He'll be brilliant at it.

Delighted for my friend and colleague @ChrisMasonBBC who’s got the Any Questions gig. I grew up listening to that show and Chris will be an outstanding chair. He works incredibly hard and he’s a credit to the BBC. pic.twitter.com/PgalOIQUbX

Such good news that @ChrisMasonBBC is going to be the new presenter of Any Questions on Radio 4. I'm really pleased for him. We've known each other twenty years you know. Vive le #Brexitcast!

@ChrisMasonBBC will be brilliant at this – and will make listening and participating huge fun . Well deserved ! https://t.co/SX6wUvBlgf

Well done @ChrisMasonBBC on landing the ‘Any Questions?’ gig on @BBCRadio4. He’ll be brilliant. I am convinced he is one of the nicest humans on the planet & manages to combine that with being great at his job 👏🏻👏🏻👏🏻

It's easy to put travel news on your radio station, from £25 a month for online stations. See RadioTravelNews.com for details and same day set up.
Posted on Wednesday, October 9th, 2019 at 3:08 pm by Stuart Clarkson