Brexitcast to become weekly television show on BBC One 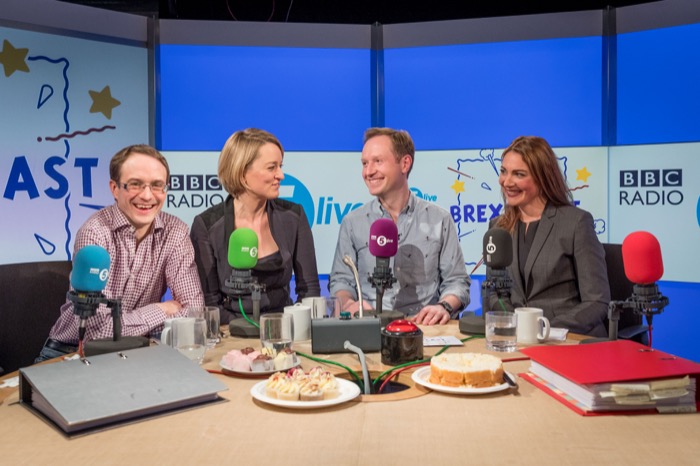 Brexitcast will become the first BBC podcast to be turned into a television programme on BBC One.

It’ll be on-air every Thursday night at 11.30pm, as announced at the Radiodays Europe Podcast Day in London, taking place today.

Political Editor Laura Kuenssberg, Europe Editor Katya Adler, Europe Correspondent Adam Fleming and Political Correspondent Chris Mason, will continue the tradition of joining the discussion from wherever their news reporting duties take them, linking in to a state-of-the-art studio at BBC Westminster.

The podcast will still be available to listen to and download on BBC Sounds as weekly episodes, with special emergency editions recorded as unpredictable and momentous Brexit developments dictate.

The programme is due to start in September.

Massively geeking out to see the whole Brexitcast team at #PODRDE19 and cant wait to watch them transition to TV. Interesting to hear how tech enables both their output and tone. pic.twitter.com/bBAi8oq6W3

Laura Kuenssberg, Political Editor and Brexitcast co-presenter, says: “Who says no one’s interested in politics?! Brexitcast has grown and grown because our audience loves and deserves detailed explanations of enormous events, but likes a bit of devilment too.

“It’s an absolute thrill to bring the show to BBC One, and a privilege to invite the legendary and committed This Week audience to join us, following on from Andrew, the supreme late night host.”

Gavin Allen, Head of News Output, added: “Brexitcast is exactly what political coverage should – and in this polarised climate – needs to be about: expert, accessible, treating politicians like grown-ups and politics as complex. Seeking to learn not lambast, and yet still with plenty of fun thrown in. We’re delighted therefore to bring this fresh new format to BBC One and to replicate the success we’ve seen, but without changing the formula that’s got it to where it is.”

RadioToday’s own podcast recently featured two of the presenters, Chris Mason and Adam Fleming, talking to Stuart Clarkson about the journey of the show and how it is produced.

Need a new or improved logo for your radio station? Visit OhMy.Graphics and see how awesome you can look.
Posted on Thursday, June 13th, 2019 at 11:29 am by Roy Martin