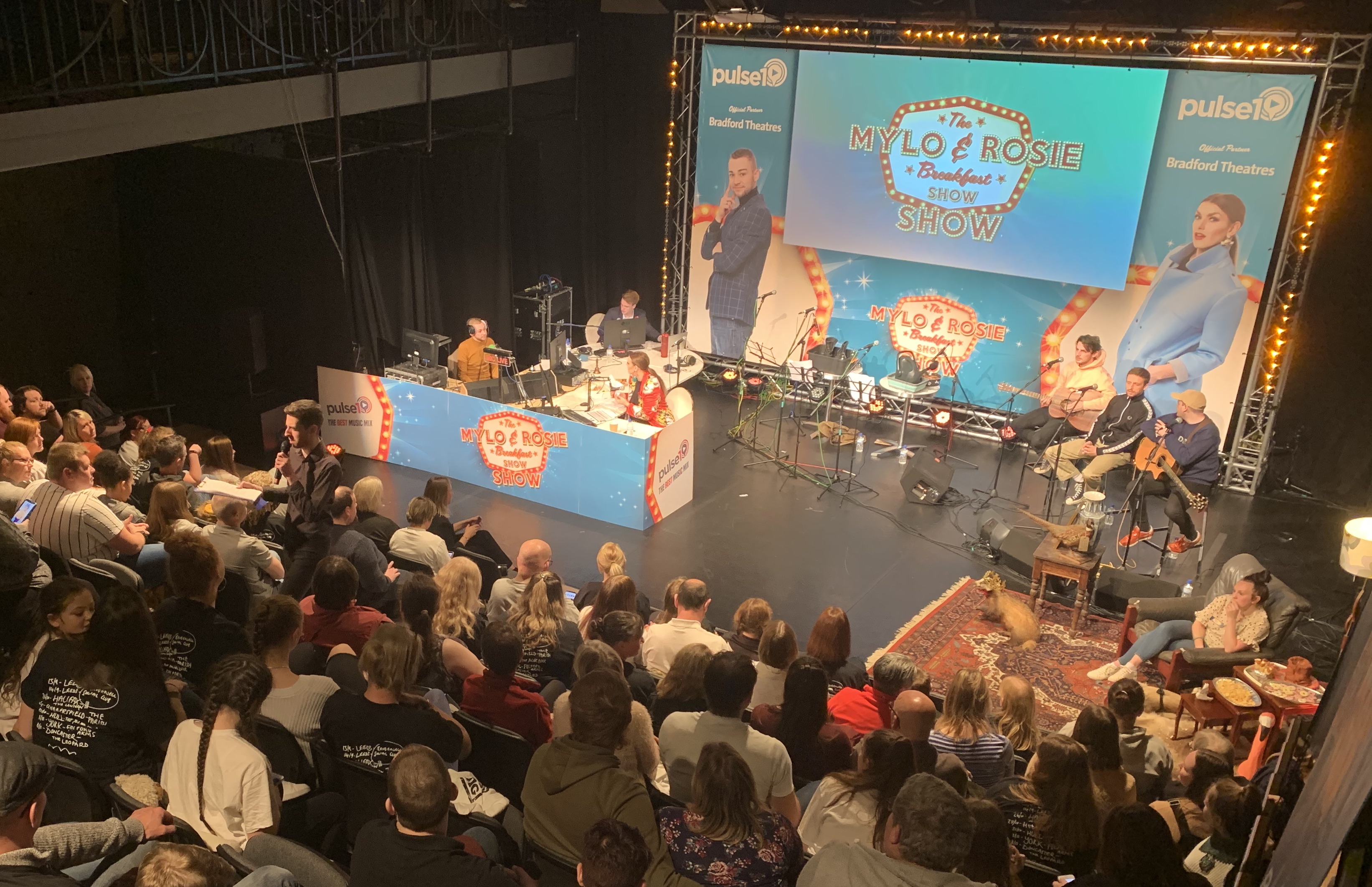 Listeners at the Alhambra Theatre were treated to live adverts, live jingles and some music performances as well.

Voice overs including Mitch Johnson and Guy Harris were on stage helping to bring the show to life, while Yorkshire-based band Skinny Living performed jingles and played live. Members of the cast from the touring production of Mamma Mia – currently at the Bradford Alhambra – did a rendition of SOS by ABBA, while the theatre’s panto star Billy Pearce popped in to voice a live advert for the Christmas show and tell a few jokes.

More than a thousand listeners applied for tickets to ‘The Mylo & Rosie Show Show’. One lucky listener was successful in a game of ‘Win the Ads’ on stage too, and walked off with a selection of prizes from advertisers who had featured on the show.

Station Director, Roger Cutsforth, said: “One of the main attractions of joining the team at Pulse 1 was the chance to work with the ARIAs Gold Winning Breakfast Show Mylo & Rosie. Nothing prepared me for the breathtaking talent working right across all departments. Today was all of that talent coming together and smashing it, proud doesn’t even come close.”

Content Controller, Jacqui Blay added: “To put on a live stage show is one thing, but to broadcast that same show live on air, ensuring the audio is just as entertaining for the listener, is one mean feat. Well done to Mylo & Rosie for making it all look so easy too! I’m so proud of the whole team who helped put this all together from the technical to the programming and everyone in between, a great team effort.”

Group Programme Director for the former Wireless local stations, Terry Underhill, told RadioToday: “I’m extremely proud of our team in Yorkshire who pulled off a fantastic live show that will be talked about for a long time to come. Mylo & Rosie were their usual superb selves but the team behind the show should also be recognised for an outstanding morning of great radio.”

You can see some of the highlights from the show on the Pulse 1 website or from some of the social media posts included below.

We’re on until 10… make sure you keep checking our social media so you don’t miss ANY of the action.

Remember we’re totally LIVE so anything can happen ? #pulse1showshow pic.twitter.com/4yI7BJcV59

The Bandit is here for Beat the Bandit with @kirkleescollege

But the question is will today’s player be beaten? ?

When you get @SkinnyLivingUK to sing your stations jingles!

Pulse 1 presenters get locked up in a shop window

The Pulse relocates studios and rebrands