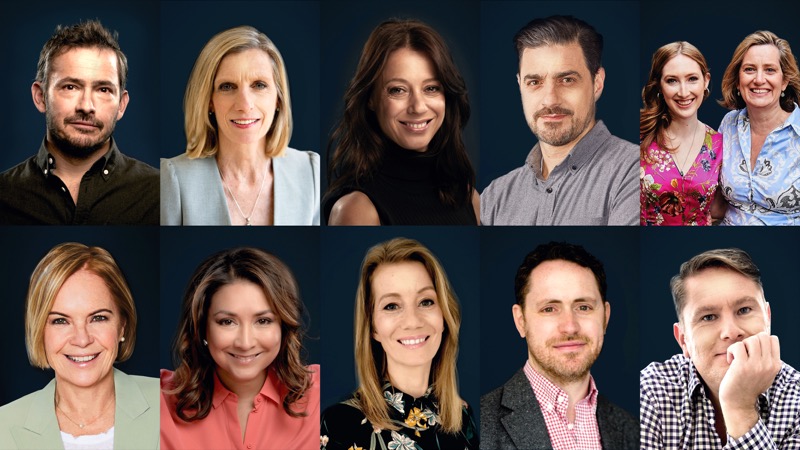 The regular weekday schedule is completed by former 5 Live and Radio Scotland journalist Calum Macdonald as the presenter of early breakfast for one hour from 5am weekdays.

Alexis Conran, who has recently been presenting on talkRADIO, will host lunchtimes on Saturday and Sunday. Alexis is best known for co-hosting the BBC Three show The Real Hustle and is a member of the Magic Circle.

Other people joining Times Radio for specially-commissioned shows and podcasts include former Conservative Home Secretary Amber Rudd with her journalist daughter Flora Gill, talking about their different takes on the world, and international businessman, Brexiteer and broadcaster Lord Digby Jones will present a series looking at how businesses are getting ready for Brexit.

Times columnists Rachel Sylvester and Alice Thomson will host an interview series in which they talk to leading figures about how overcoming the challenges of their early lives shaped the people they have become. Confirmed guests so far include Tony Blair, Kirstie Allsopp, actor Brian Cox, and Sir Paul Nurse. 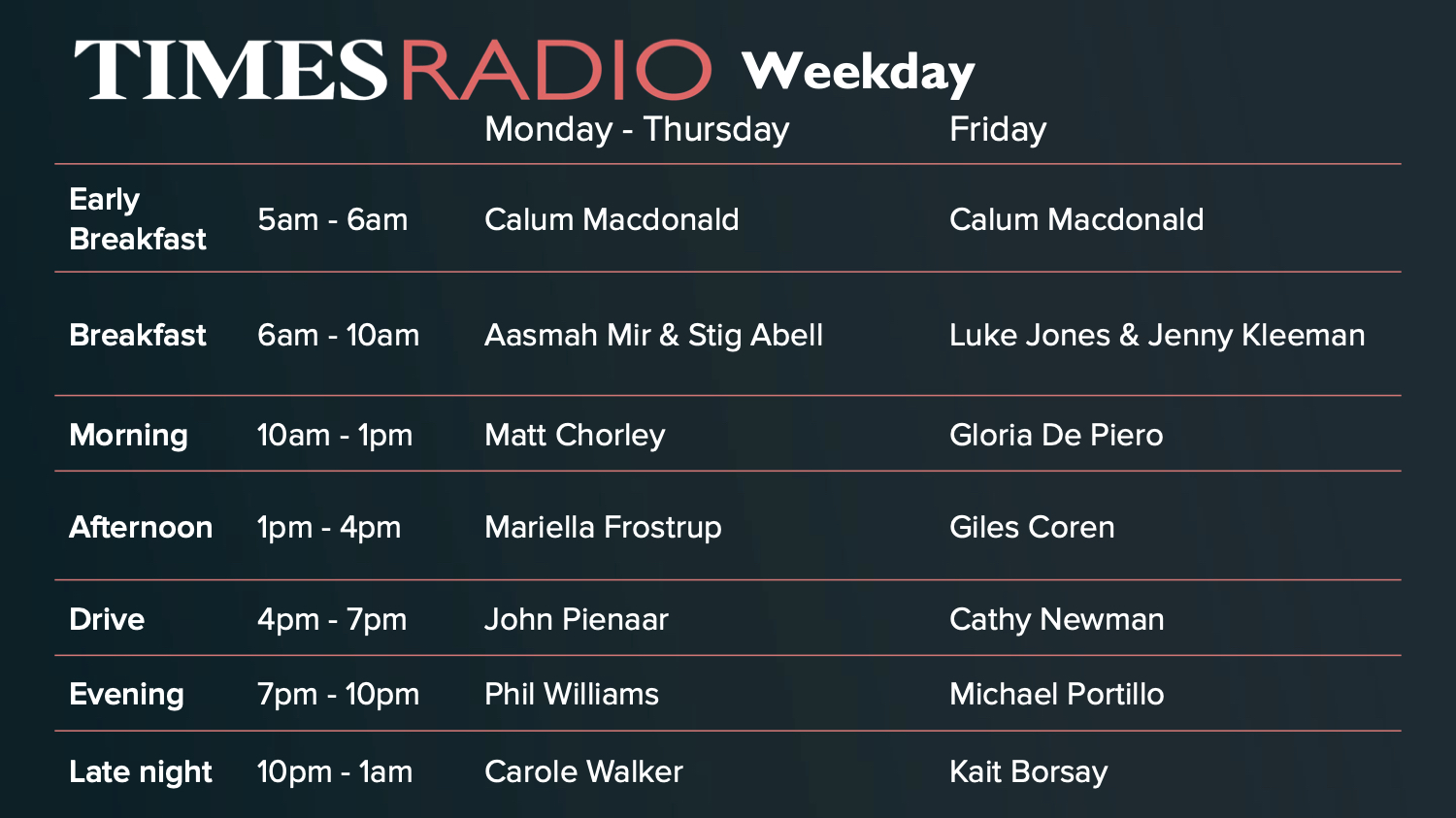 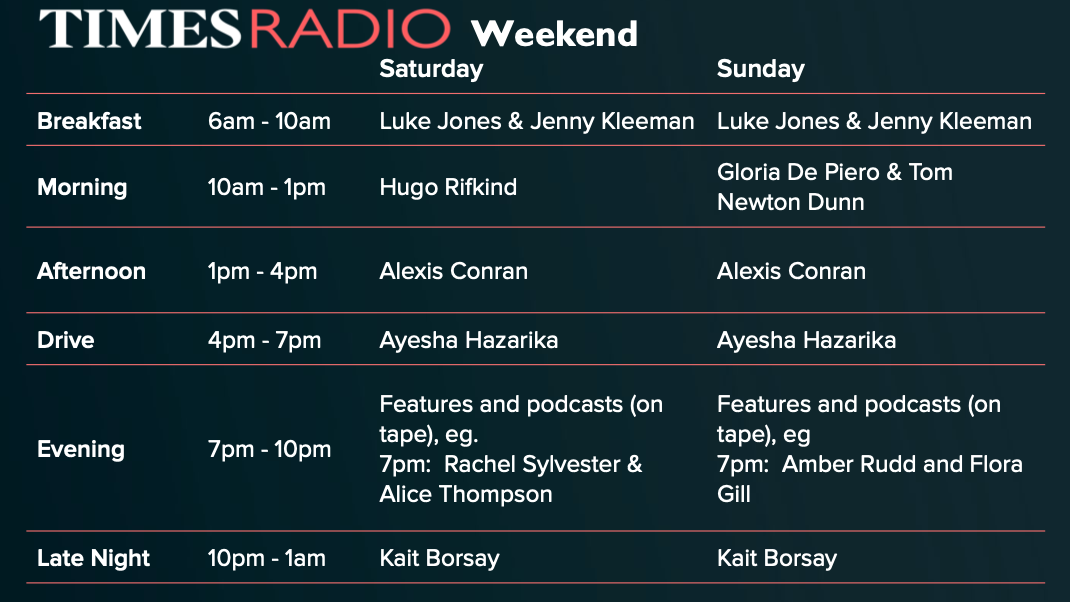 Mariella Frostrup: “This is such an exciting time to be delivering a live radio programme when trusted and accessible news and big ideas for a changing future are essential. The pedigree of The Times journalism is world renowned, and I’m excited that Times Radio have given me the chance to create an ambitious show covering topical news, lifestyle and culture – with some levity along the way – that I hope will become a fixture in listener’s lives. I’m also honoured to number among the stellar line-up they’ve assembled.”

Phil Williams: “I’m delighted to be joining Times Radio. I’ve read the Times all my adult life. My show will analyse the day’s news without leaving listeners feeling overwhelmed by it. We’ll also be covering sport, entertainment and culture each night, giving contributors the space to speak without constant interruption, and offering the evening listener a friendly place to relax with the radio.”

Carole Walker: “I am really delighted to be part of this exciting new radio station. My evening show will offer a fresh assessment of the day’s most significant events and a distinctive look-ahead to tomorrow’s headline stories at home and abroad.”

Giles Coren: “I have been writing for The Times for more than 25 years, so I would have been frankly insulted not to be offered a show of some sort in this exciting and timely move into radio. The Friday afternoon slot is a mixed blessing as it’ll kill my favourite lunch of the week. But on the plus side I can be in the pub with my week’s work done before it gets too packed. My show will involve me offering my usual completely wrong take on everything plus a range of brilliant guests not getting a word in edgeways. You’d be a fool to tune in. I mean not tune in.”

Calum Macdonald: “Oh my days! 5am is early isn’t it? And it’s because we all have that exact response that being on Times Radio with those early risers at that time of day is perfect. We all need early morning friends – and I can’t wait for us to hang out, get clued up on the news and issues of the day – and all that before all those regular 9-5ers have even had their toast.”

Hugo Rifkind: “My show is for all the people who love the Saturday edition of The Times and who wish, after reading it each week, that there was somebody nattering on in a similar vein out of a small box in their kitchen.”

Gloria De Piero: “It’s not often that you get to be involved in launching a major new voice in national speech radio. Times Radio wants to do things differently, and I’m absolutely thrilled to be working with someone of Tom’s calibre to reinvent the Sunday morning political debate with G&T.”

Kait Borsay: “It’s hugely exciting to be involved in the launch of Times Radio. My aim is to offer listeners radio that extends the conversations in our daily lives, filling the gap felt by those who can’t find a station that sounds like them. We will complement news and current affairs with issues like social engagement, parenting and digital culture. I can’t wait to get started.”

Alexis Conran: “It is great to be part of Times Radio. My show will be three hours of entertaining news-based conversation, looking at the politics of the week, and delving into consumer and tech issues.”

Ayesha Hazarika: “I’m absolutely delighted to have my own show on Times Radio. With so much going right now, it’s the perfect moment for an exciting new station which offers well informed opinion and debate with some much needed good humour. “

Amber Rudd: “I’m excited to be joining Times Radio, who have already recruited some top political journalists to their team. It will be a great platform for me to put Flora in her place.”