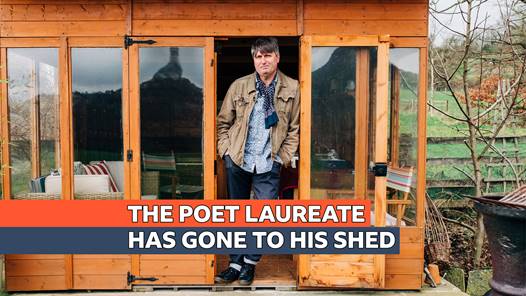 Simon Armitage is heading down the garden path for a second series of The Poet Laureate Has Gone to His Shed on Radio 4.

Simon welcomes his visitors to talk about writing, music, art, sherry, the sounds of nature, philosophy, and to reflect on life and creativity.

As well as being full of plant pots and trowels the shed is the place where Simon is currently tackling the poetic form of haiku – tiny seventeen syllable poems often about nature or the seasons – and so each episode will feature a haiku written especially for that week’s guest.

Simon Armitage says: “For too long I’ve been in the shed on my own, writing haiku, staring intensely at flowers and clouds, so I’m thrilled to be finally throwing back the door, dusting down the spare chair and sharing real live conversation with clever and creative people.”

Rhian Roberts, Radio 4 Commissioning Editor for Digital and Podcasts, adds: “Simon’s shed has become a place for magical stories and deep and dreamy conversation; his next collection of guests are all lined up to create some equally special moments.”

The Poet Laureate Has Gone to His Shed begins Saturday 3 July at 19:15 on Radio 4 and BBC Sounds. The first series, featuring Chris Packham, Maxine Peake, Testament and many more, is also available on BBC Sounds.

Need a new or improved logo for your radio station? Visit OhMy.Graphics and see how awesome you can look.
Posted on Wednesday, June 16th, 2021 at 1:22 pm by RadioToday UK