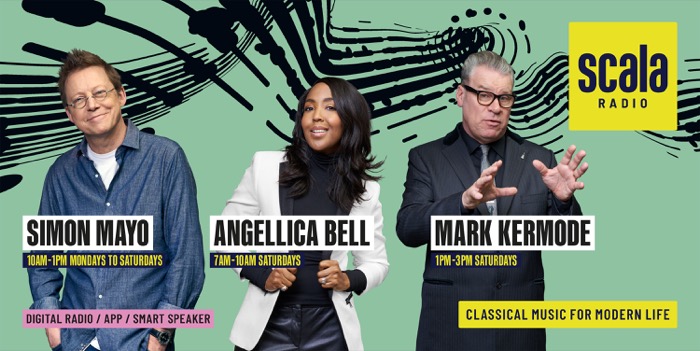 Simon Mayo, Angellica Bell and Mark Kermode are the stars of a new national marketing plan for Scala Radio.

The creative will be focused upon ‘Classical Music for Modern Life’ targeting the station’s core audience of ‘cultural explorers’ passion for music.

The campaign has several creative executions inspired by the Scala filter of 70% familiar and 30% surprise.

The national campaign combines large format outdoor sites including the Westway Tower, Four Dials at Westfield Stratford, and The Waterloo Domination: multiple sites around Waterloo, the gateway to live classical music at Southbank, and the South Kensington Underground tunnel. In addition, the campaign includes an extensive national press and magazine campaign and highly targeted digital advertising including Facebook and video content.

Anne-Marie Lavan, Group Marketing Director, Bauer Media said: “Our insight has uncovered a modern and valuable audience of cultural explorers, and this campaign seeks to target them with contemporary creative which is both familiar and surprising. This campaign will capture our audience’s imagination and celebrate the place classical music has in modern life.”

The campaign began this week with creative by Think Farm and media planned by the7stars.

Need a new or improved logo for your radio station? Visit OhMy.Graphics and see how awesome you can look.
Posted on Wednesday, March 27th, 2019 at 7:44 am by RadioToday UK