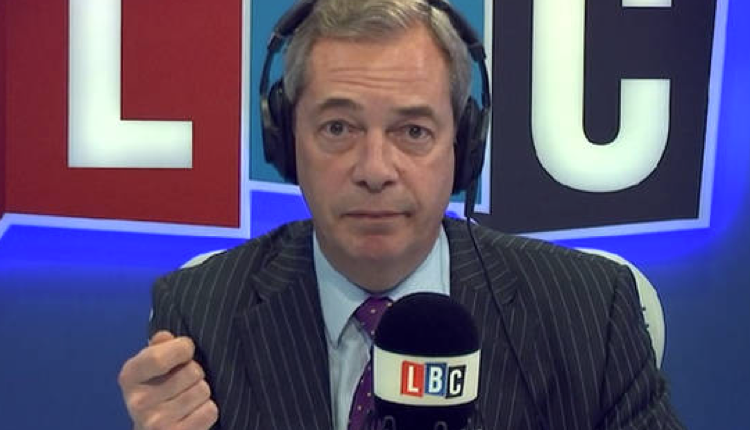 Ofcom has rejected seven complaints made against The Nigel Farage Show on LBC for comments made by the host.

During a programme on 31st March, Nigel Farage said that “Jon Snow should be attacked” during a discussion with Alastair Campbell about Brexit and the fact that the UK did not leave the European Union on 29 March 2019.

The complainants felt this was “inappropriate” and “unsuitable” and potentially encouraged violence against Channel 4 News journalist Jon Snow.

But upon investigation, LBC confirmed Mr Farage meant a verbal attack, for his “terrible condescending bias” rather than a physical attack.

Approximately four minutes after the statement, and immediately after a commercial break, Mr Farage read out a Tweet from a listener which said: “Nigel Farage calls for Channel 4’s Jon Snow to be attacked, is it incitement?”

Mr Farage replied: “No! Verbally, verbally attacked for his disgraceful coverage of the Leave rally on Friday, for which I’m pleased to say that Channel 4 has made a grovelling apology, so fine. It does worry me that we have Public Service Broadcasters who clearly display too much bias”.

LBC did not believe the content caused offence under Rule 2.3 because:

• Mr Farage “promptly clarified” what he meant;
• Mr Campbell “robustly” challenged Mr Farage; and,
• “Listeners would have reasonably understood the reference to Jon Snow was not an incitement for violence”

Ofcom said: “It was our view that the potential significant offence caused by Mr Farage’s ambiguous statement was sufficiently contextualised in this particular case. Our Decision is therefore that this content was not in breach of Rule 2.3.”

But the regulator took the opportunity to remind broadcasters that in the context of the current volatile public discourse surrounding Brexit, particular care is needed to fully contextualise any ambiguous statements in programmes that have the potential to be understood by audiences as highly inflammatory and provocative.

An LBC spokesperson told RadioToday: “Nigel Farage’s programme on LBC was not found in breach and therefore we have no further comment to make.”

Need a new or improved logo for your radio station? Visit OhMy.Graphics and see how awesome you can look.
Posted on Wednesday, August 7th, 2019 at 2:34 pm by Roy Martin