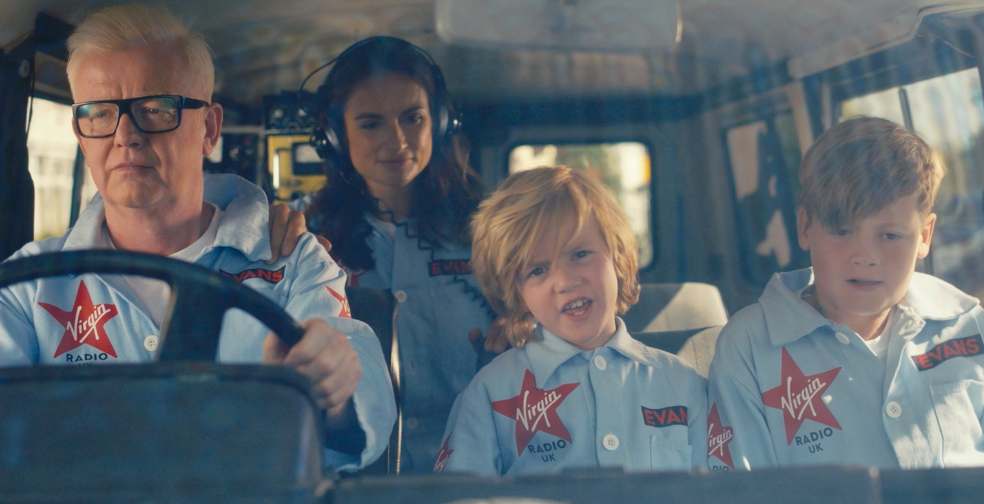 A new advertising campaign for the Chris Evans Breakfast Show on Virgin Radio has kicked off.

Chris, his wife Natasha, and his two sons – seven-year-old Eli and ten-year-old Noah – have filmed the new advert in the Virgin Radio ‘detector van’, styled on the old TV detector vans.

In the TV ad, Chris Evans and his family are on a mission to retune the great British public’s radios.

The 30-second spot which launched on Sky over the weekend sees Chris and his family drive the Virgin Radio detector van into a quiet residential North London road, with Chris pulling up outside a house to send his two sons to work helping residents retune his show.

Noah and Eli also appeared in the previous Virgin Radio advert with their dad.

Creative Director of Pulse Creative, Rob Welch: “As part of our ongoing ‘retune to Virgin radio’ campaign, we’ve teamed back up with Chris and his family and sent them on the road to educate the public. We know there are millions of people out there who just aren’t aware that they have to retune, so this spot alongside supporting digital and press, will help them to easily find it.”

The latest RAJAR results from August gave Chris over 1.1 million listeners. At the time Chris said; “Six months in, and we couldn’t be happier. Amazing guests, the best bands and certifiably the greatest listeners around.”

Need a new or improved logo for your radio station? Visit OhMy.Graphics and see how awesome you can look.
Posted on Monday, October 7th, 2019 at 12:01 pm by Roy Martin