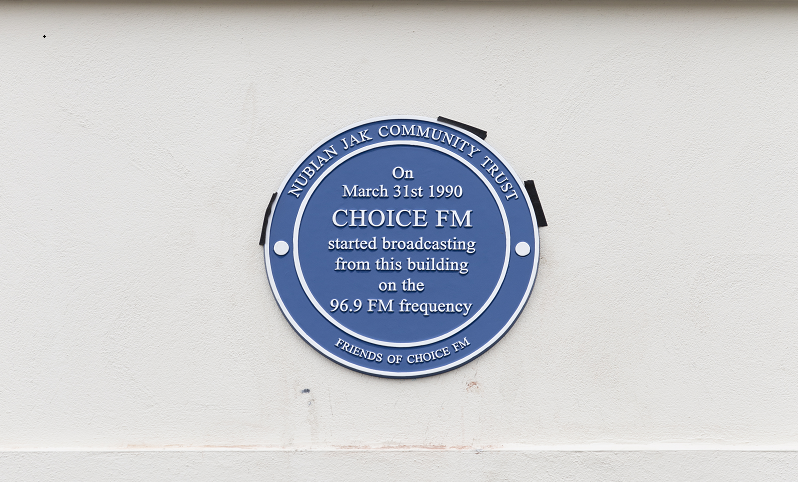 A blue heritage plaque has been unveiled in honour of Choice FM, the first and only black radio station with a London wide commercial licence.

On March 31st 1990, the station delivered the first historic broadcast on the famous 96.9FM frequency.

During its 23 year tenure, the station helped to champion black music of all genres and break acts from around the world.

The station also covered debates on current affairs issues that were not covered by other mainstream stations.

Choice FM was awarded a number of accolades including MOBO and Sony Radio Academy Awards.

In 2004, the station was bought by Capital and on the 7th October 2013 it was rebranded as Capital Xtra.

Members of the Choice FM family and the community were able to view the event through a special online celebration broadcast hosted by former Choice FM DJs Martin Jay, George Kay and Daddy Ernie on Youtube.

The London Blue Plaque scheme aims to link present day buildings with historic people and events of the past. There are more than 900 blue plaques in London and 25 in Lambeth, celebrating the lives of notable men and women who had a connection with a building in the area. Some of those names include the artists Vincent Van Gough, Charlie Chaplin and Bob Marley.

The Nubian Jak Community Trust has installed 59 plaques to date and the Choice FM plaque is the 60th. This plaque will be one of the few BAME plaques in Lambeth, giving the station a permanent place in British history. 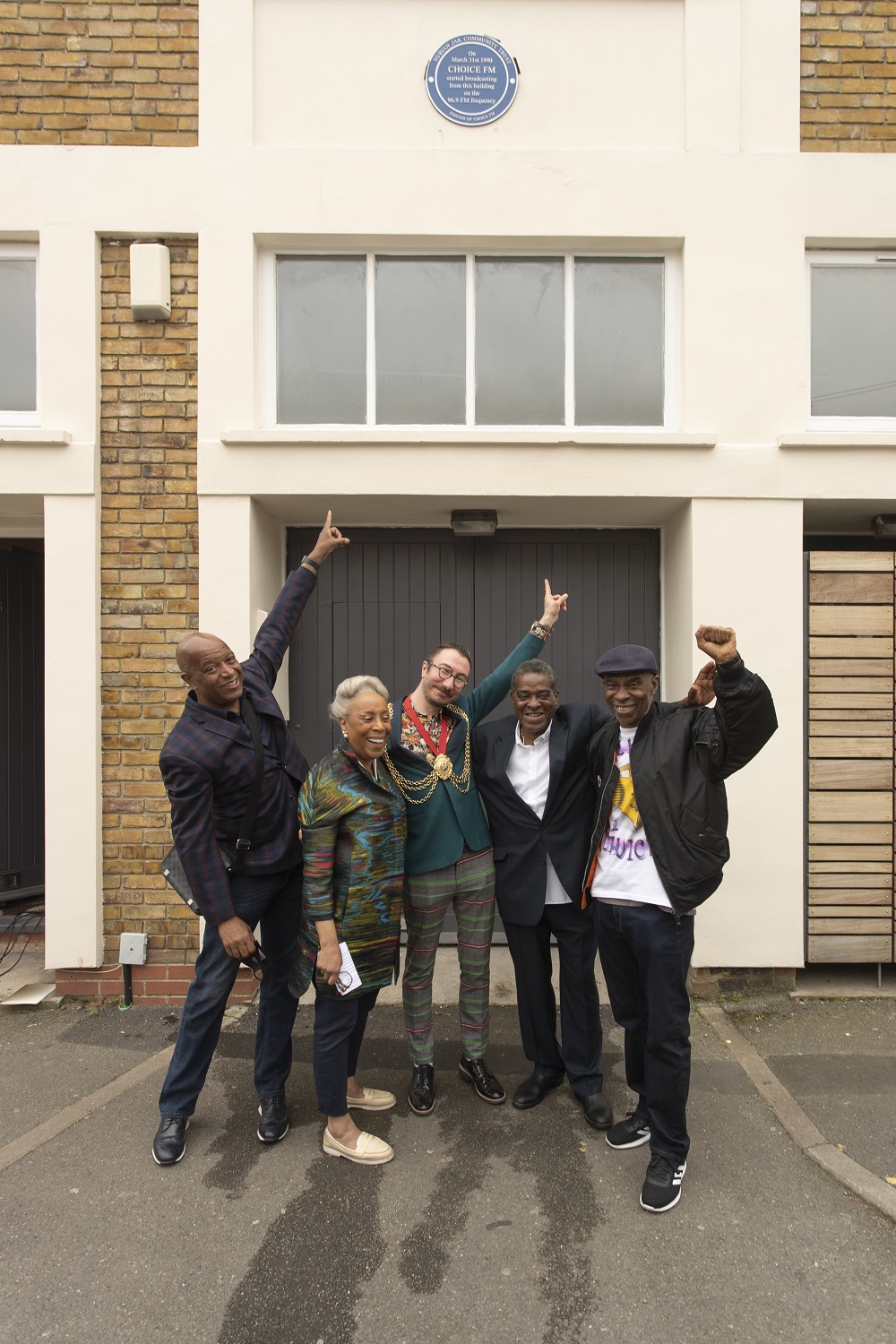 Cllr Sonia Winifred, Cabinet Member for Equalities and Culture said “Choice FM will always hold a special place in the hearts of the Lambeth community particularly in Brixton where it was launched in 1990 at Trinity Gardens SW9.

“The first licenced independent black music radio station gave us all a sense of pride and belonging. There has been no other to replace it and we owe a great deal to its Co-founders Patrick Berry and Neil Kenlock when it started broadcasting 31 years ago on 31 March 1990. Choice FM will forever live in the hearts of the people of Lambeth.”

Plaque campaigner and former Choice FM DJ Daddy Ernie said “On Saturday 31st March a station was born that changed the sound of UK radio forever. Choice FM came from humble beginnings at Trinity Gardens and was the sound the community was longing for. It played the type of music that mainstream radio didn’t play, making global stars from R&B, Reggae, Dancehall and Soca artists. Now we pay homage and unveil a symbol to mark where it all started.”

Smooth Radio presenter and former Choice FM DJ Angie Greaves said “Choice FM completely changed the way that the 15 to 24 demographic listened to radio alongside mature lovers of 90s R&B, soul, reggae and soca. It created connections between cultures through the music. Those continuous jams will always be a part of my soul and will also be part of the huge platform of my radio career.”

Co-founder Neil Kenlock said: “Many Black British people and those from many other communities remember Choice FM and the strong heritage that it has left behind. The station gave opportunities to UK and international artists, businesses, local community groups and charities like the African Caribbean Leukaemia Trust who didn’t have a media outlet. 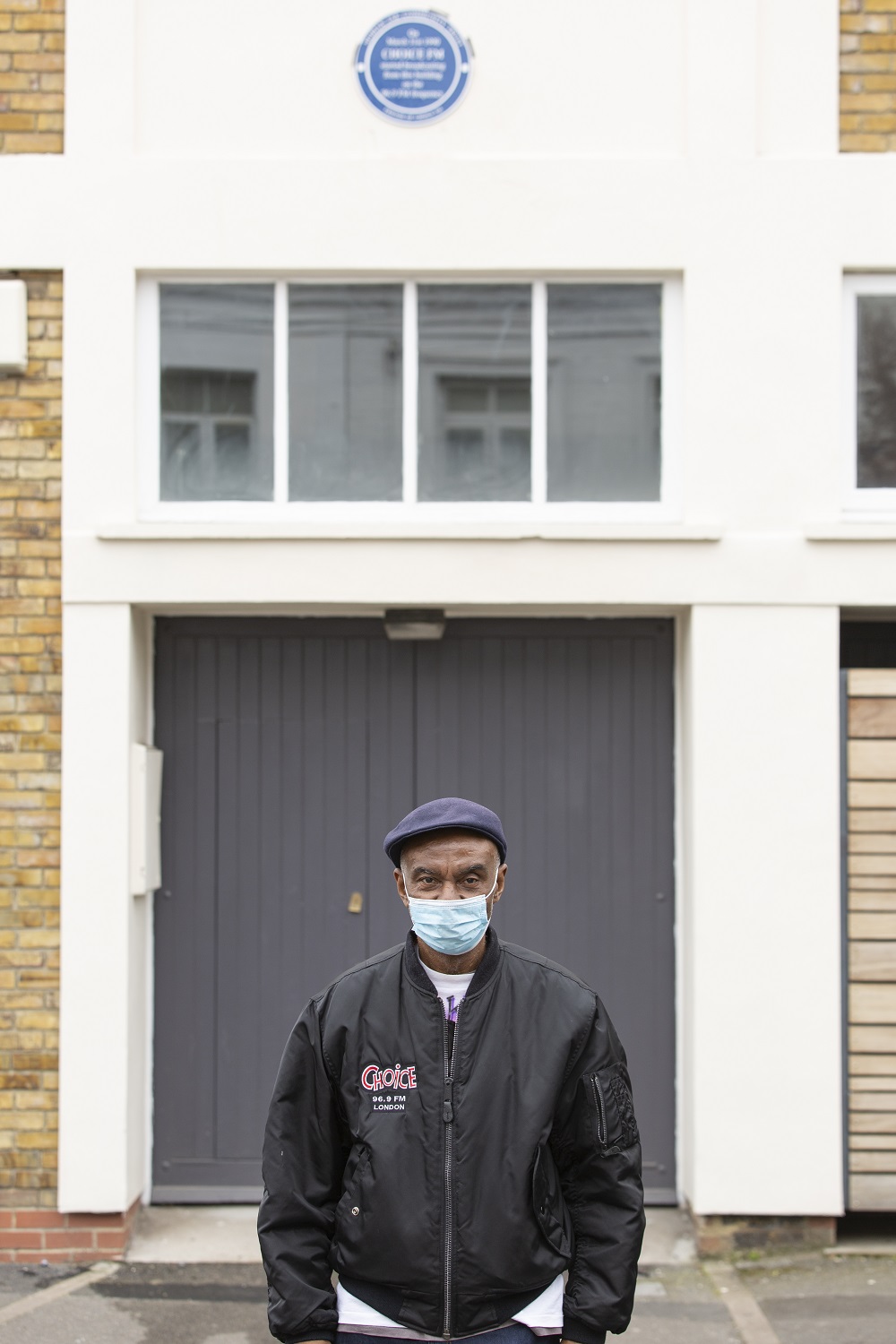 “Since Choice FM there has never been another black-owned, commercial licenced station that broadcasts across London. Therefore, celebrating the anniversary is important, touching those who remember it and educating those who are not aware of this British history.

“The blue plaque will highlight the work of Windrush descendants and our huge impact on the radio and music industry in the UK. I’d like to thank everyone, including Lambeth Council for their support for this project.”

Dr Jak Beula, Founder of Nubian Jak Community Trust said “Honouring Choice FM with a blue heritage plaque, feels like Nubian Jak has come full circle. It was the station that helped launch the Nubian Jak brand, and memorialising the space where Britain’s first licenced black-owned radio station had its base, will solidify its place permanently in broadcasting history.”

Former Director Dr Yvonne Thompson CBE added: “Choice FM was at the vanguard of change that exploded black music and its iconic fashion and cultural derivatives into British mainstream society. This well-deserved Blue Plaque forever immortalises the time and the place where black music, fashion, and arts became the norm and not the exception.

“Choice FM and its loyal stakeholders and listeners spawned a generational cultural shift across all communities, enriching our society as a whole for the better.”

The plaque has been funded by the Choice FM Blue Plaque Group and other members of the black community who made donations through a Go Fund Me campaign. The donation page was set up to give people the opportunity to support the campaign for the plaque and raise awareness of the history. Funds raised will also be donated to an amazing charity (£4,500), The African Caribbean Leukaemia Trust (ACLT).

Choice FM worked closely with the charity during their broadcasting years, to help provide hope for patients living with blood cancer and other illnesses. The Choice FM Blue Plaque Group continues to support their work through this campaign.

This plaque will ensure that the station and its community will always be remembered.

Need a new or improved logo for your radio station? Visit OhMy.Graphics and see how awesome you can look.
Posted on Saturday, April 3rd, 2021 at 3:29 pm by RadioToday UK