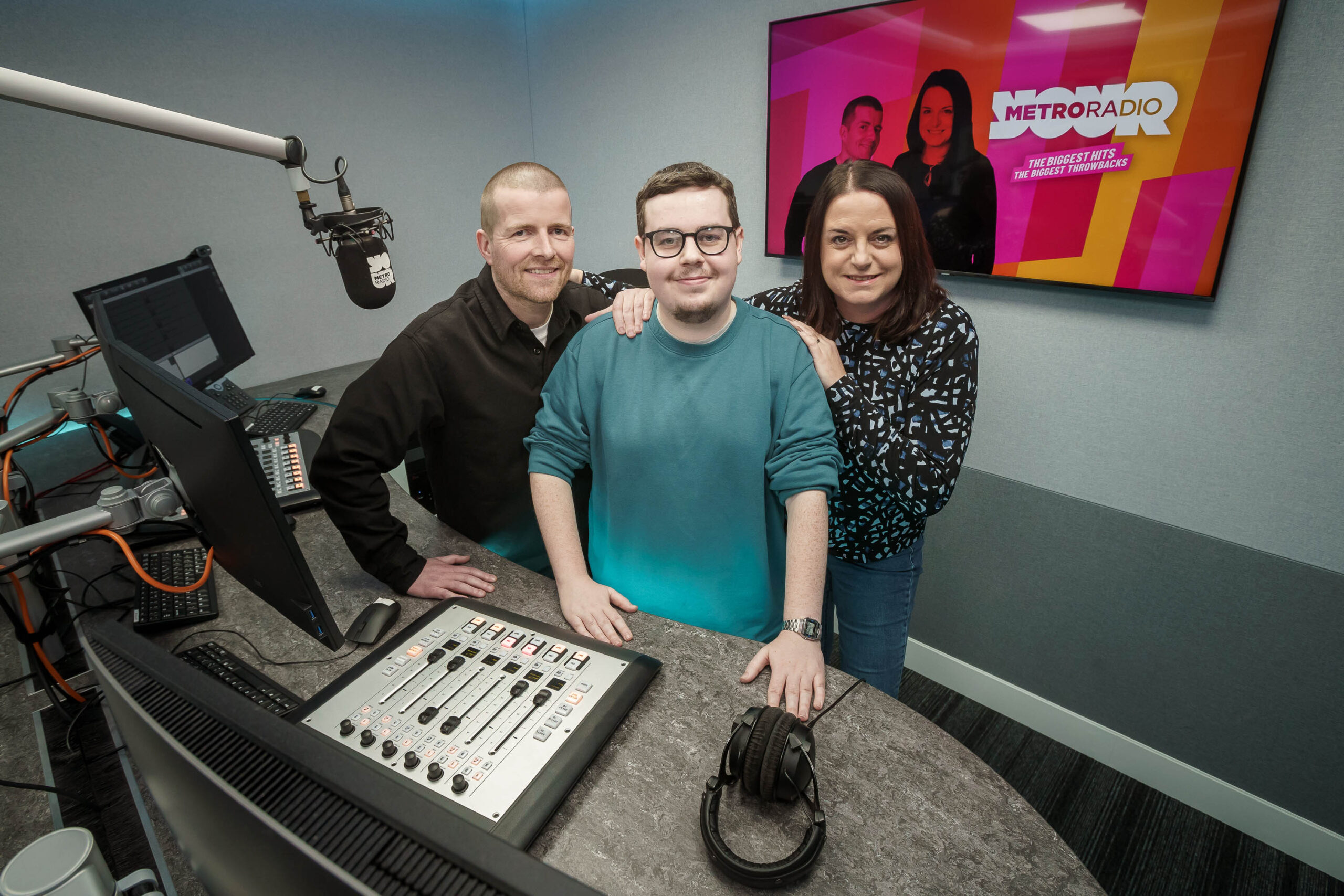 A long-time listener to Steve and Karen and Sunderland University graduate has been appointed as Producer for Steve and Karen’s breakfast show on Metro/TFM.

Liam Milburn has worked his way up from volunteering on community radio to bag the job which involves getting callers on-air, editing audio, facilitating competitions and developing new ideas.

“I think I’ve been working with them just about long enough now to get over feeling star-struck!” Liam, from Newcastle, said.

“Steve and Karen have been on breakfast radio in the north-east since I was four-years-old, so when I was getting ready for school and starting to develop a taste for music, it was their show which soundtracked those years and gave me a reason to get up bright and early.

“They’re incredibly down to earth and just like anyone you’d meet in the north-east. They’re so connected to the area and always have been, it’s part of what’s made them so successful for so long. Apart from the fact they have a wealth of radio experience, they talk to the listener like they’re a mate.

“It’s a really unique show which proudly waves the flag for the north-east and makes the listeners the star, which I absolutely love.”

Liam’s radio interest began at the age of 14, when joined the University’s community station Spark on work experience. He enjoyed it so much, he returned to Sunderland four years later to study a Media Production degree before completing his MA.

During his studies, Liam still made time to volunteer at Spark, producing and presenting several shows, and working his way up to Deputy Programming Manager.

Liam said: “Being part of Spark has been massive in my development.

“Working in an encouraging and collaborative environment with like-minded talented people really helped to push me on.

“You have to go the extra mile to make sure things get done to a high standard, but it’s also a place to make mistakes, learn, experiment, and grow confidence and self-esteem.”

Liam went on to present and produce shows for BBC Radio Newcastle, where he remained for the next three-and-a-half years before taking up his new role at Metro Radio and TFM.

Two-thirds of the Steve and Karen Breakfast Show is now made up of Sunderland graduates – as Karen also studied at the University, graduating with a Media and Communications degree in 1998.

Liam said: “The career opportunities at the University are second to none.

“You just have to look across the radio industry and see how many Sunderland graduates have made it.

“Having Spark on your CV can bump you up the list when it comes to radio jobs. It shows you’ve worked on an FM station, and you’ve developed skills at a really high level.

“Put the work in and the possibilities are enormous.”

Richard Berry, Senior Lecturer in Radio at the University of Sunderland and Station Manager at Spark, said: “Liam seemed to spend every waking hour making radio and working on our own station, Spark. Like other graduates now working in other stations, he used that time to great effect and it’s wonderful to see it paying off with the move from the BBC to Metro Radio and TFM and one of the most established breakfast shows in the country.

“Just like Steve and Karen, Liam is from the north-east and knows what makes it tick. He used this to great effect in all his shows at Spark, where he showed a great sense of creative thinking and local knowledge. Local radio can really win over national because the presenters live and breathe their communities, and this is especially important in the morning.

“Liam is a great producer and I wish him well in his amazing new job.”

North East Regional Content Director at Bauer Media and Liam’s new boss, Chris Cotton, said: “It was clear when we met Liam, he already had a solid understanding of what makes a successful breakfast radio show.

“His knowledge of Metro Radio and Steve and Karen’s show was evident from our first conversation.

“We were particularly impressed with his appreciation of how powerful the ‘local’ attribute can be for a brand, when the team genuinely takes it to heart and delivers it with authenticity like Steve and Karen.

“We’re very excited for Liam to join the team, we think the strong crafts skills and knowledge he already possesses will make him a great fit.”

The University of Sunderland is supporting MadeAtUni: Creative Sparks, a national campaign to showcase the creative talent produced by UK universities and encourage the Government to promote and support the importance of creativity and creative courses.

Need a new or improved logo for your radio station? Visit OhMy.Graphics and see how awesome you can look.
Posted on Wednesday, February 9th, 2022 at 2:22 pm by RadioToday UK