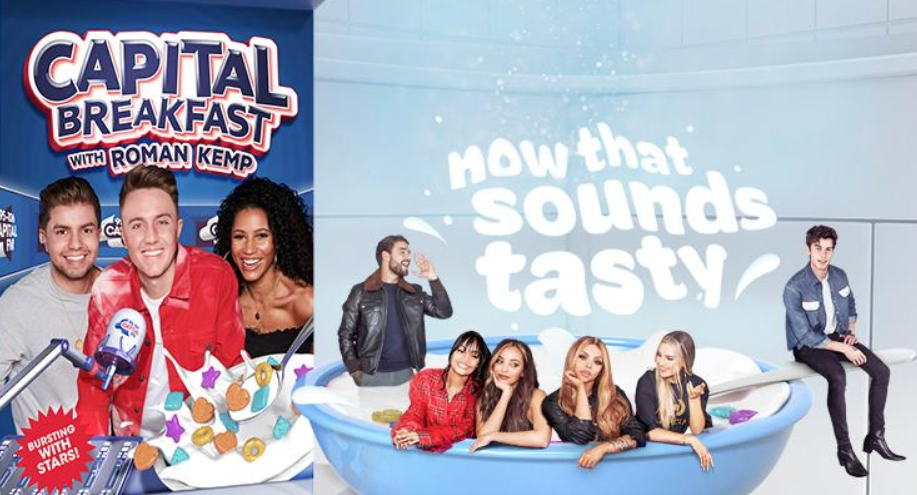 The campaign premiered on TV during The Voice UK live final on ITV1 tonight ahead of the nationwide launch of Capital Breakfast with Roman Kemp on Monday, April 8th.

Global has teamed up with creative agency Lucky Generals for the first time to create the campaign. In the TV ad, Capital Breakfast is reimagined as a breakfast cereal, with Roman Kemp, Vick Hope and Sonny Jay taking the viewer through their extraordinary world, packed with musical stars.

Little Mix glide through a multi-coloured sky on a magical spoon, Liam Payne chases the Breakfast hosts riding a giant toy dinosaur and Anne-Marie surfs through breakfast cereal on a jet-ski dodging Cheryl, Shawn Mendes and Halsey in her path.

Now across the UK and tastier than ever, Capital Breakfast with Roman Kemp 🥄 pic.twitter.com/Nfmr1KnyTY

The marketing campaign will run across TV, Cinema, Social, VOD and Outdoor and will introduce people across the UK to Capital’s new national Breakfast Show, which is sponsored by eBay.

The media was planned and bought by PHD.

Adam Johnson, Director of Marketing at Global, said: “We wanted to capture the fun, energy and the personality of Capital Breakfast with Roman Kemp with this campaign. What better way to do that than by putting our presenters and some of the biggest artists on the planet into the extraordinary world of your new favourite breakfast cereal. Launching this show across the UK is a huge moment for Global and this unmissable campaign will show millions of people across the nation where to find the hottest new music and the world’s biggest stars.”

Roman Kemp, Vick Hope and Sonny Jay are replacing all the regional breakfast shows on Capital stations in England, Scotland and Wales as first revealed by RadioToday last month.

Listen to the new breakfast team talking to RadioToday on a recent episode of our weekly podcast:

It's easy to put travel news on your radio station, from £25 a month for online stations. See RadioTravelNews.com for details and same day set up.
Posted on Saturday, April 6th, 2019 at 11:25 pm by Roy Martin