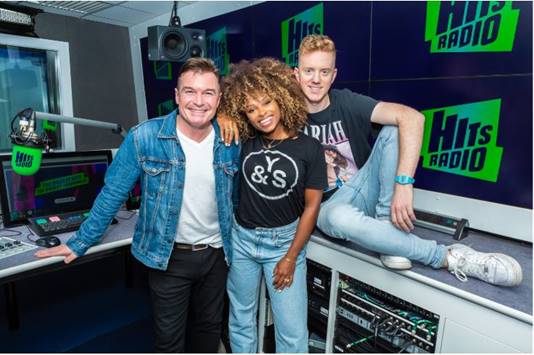 Fleur, Greg and James will start the programme from Manchester, for Manchester (and DAB elsewhere), on July 12th – replacing Gethin, Gemma and Dave.

Paul Gerrard, Programme Director Hits Radio said: “Fleur has a perfect radio personality with an infectious energy and naturally chatty style that we know our listeners will love.

“Her natural talent for radio shone through the minute she stepped into the studio and it’s with this and her brilliant co-hosts Greg and James that we’ve been able to build a really exciting new breakfast show. At once relevant, engaging and uplifting, the show will connect perfectly for our listeners who lead busy and chaotic lives.”

Fleur East was a finalist on The X Factor in 2014 and was a contestant on last year’s I’m a Celebrity… Get Me Out of Here!

Greg Burns is a comedian and presenter who has held long-running Drivetime shows on both Heart and Capital, as well as a show on Virgin Radio. After returning from Australia where he hosted a national morning show for the last two years, he returned to the UK for a weekend show on Hits Radio a couple of months ago.

James Barr is an MTV presenter and comedian who co-hosts LGBTQ+ podcast A Gay & A NonGay, and is taking his first solo show to the Edinburgh Festival Fringe this summer.

Fleur said: “We’re buzzing with excitement to launch this new show and be a morning companion for so many people around the UK. There will be early starts, but Breakfast Radio has the power to brighten up any morning, and we’re all about bringing that fun and positive energy.”

This is the long-awaited replacement for Gethin, Gemma and Dave which came to an end just 12 months after it started.

At first glance, it looks too many strong personalities all crammed into one small show for a single market.

And for Bauer to hire three highly experienced entertainers of this calibre for its most important radio show in Manchester is an interesting move. None of them have heritage in the city, or an obvious connection to it, so this re-opens the question about the possibility of Bauer networking the show to other areas and other stations.

Oh, and we’re wondering how they came up with the order of the presenters in the title of the show. Having “Greg & James” in the title of any breakfast radio show, in that order, is bound to help in the RAJAR department.

Fleur, Greg & James lined up for Tuning In North

Greg Burns gets a wind-up welcome at Nova