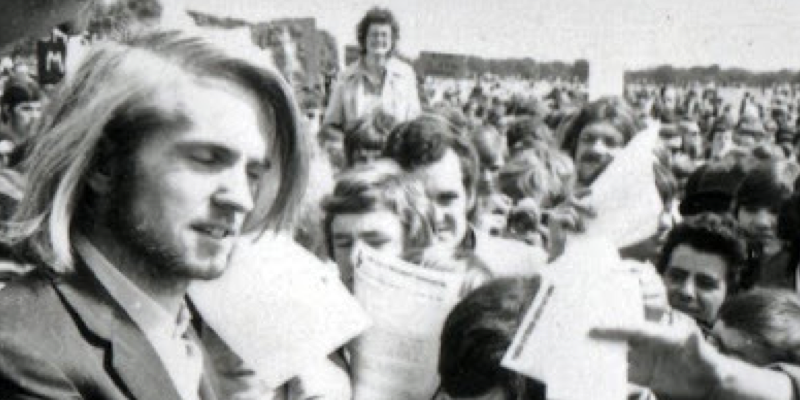 Ronan O’Rahilly, the founder of the pirate station Radio Caroline has died at the age of 79.

The Irishman set about creating the pirate station as early as 1963 from the MV Caroline anchored in international waters off the coast of Essex in England.

He’s been the figurehead of the station ever since in launched at Easter 1964, and the station continues to broadcast to this day.

The station is paying tribute to Ronan this afternoon (Monday) with the station manager, Peter Moore joining presenter Johnny Lewis live on air.

In 2013 Ronan moved back to Ireland after being diagnosed with advanced vascular dementia.

Very sad news. RONAN O’RAHILLY, Founder of Radio Caroline, passed away today aged 79. A great man who changed the face of popular music. We are currently airing a tribute our main channel. pic.twitter.com/g6RTdZWwEL

Sad to learn of the death of Ronan O'Rahilly. The Dubliner was the founder and owner of @TheRadCaroline. He was a legend, a radio pioneer and a visionary who did so much to shape the world of broadcasting. A man I'd have loved to have a pint with. Ar dheis Dé go raibh a anim. pic.twitter.com/LVXdvYx59I

Very sad Ronan O'Rahilly has passed away. He launched Radio Caroline broadcast from the sea and changed the history of the UK with the first highly popular Radio Caroline 🔔🔔. UK commercial radio was born and history was made. R.I.P always our dear friend and Love Awareness ❤ pic.twitter.com/ZDlttW0OB0

Have / had a lot of connections with Radio Caroline, and at one time, even had a bit of a dabble.#RadioCaroline@SealandGov pic.twitter.com/OKVMGS27oh

Just heard of Ronan O'Rahilly's sad passing & reflecting on far better times. Is #Sealand & the tower still sound & solid, and is it often occupied these days? Did you ever get to improve access, or is it still that scary swing lift? Kind regards / LA. @SealandGov @sealandprince

Sad to hear of the death of the legendary Ronan O’Rahilly, founder of Radio Caroline. A great character whose inspiring radio station lives on. https://t.co/xeLTcU4nIV

Quite literally the man who changed radio in this country single handily forever back in the 60’s and inspired me towards a career in broadcasting. RIP Ronan O’Rahilly https://t.co/UNAhNbrLIy

David Baker is reporting on Facebook that the death has taken place of Dublin man Ronan O'Rahilly.

He pioneered Radio Caroline which was so popular, it forced the British Govt to create BBC Radio 1,2,3 &, 4.

O'Rahilly was ahead of his time and changed music radio forever. RIP

Very sad news. RONAN O’RAHILLY, Founder of Radio Caroline, passed away today aged 79. A great man who changed the face of popular music. We are currently airing a tribute on our main channel. https://t.co/3GAK9uVXqQ pic.twitter.com/bCw1RND2Ns

#Saddened to learn of the death of Irish entrepreneur Ronan O'Rahilly, founder of my favourite radio station, the #famous RADIO CAROLINE. He was 79 and had been suffering from dementia for a few years. #RIP Ronan … and #thankyou for creating Caroline. We will not forget you.

It's easy to put travel news on your radio station, from £25 a month for online stations. See RadioTravelNews.com for details and same day set up.
Posted on Monday, April 20th, 2020 at 6:10 pm by Roy Martin