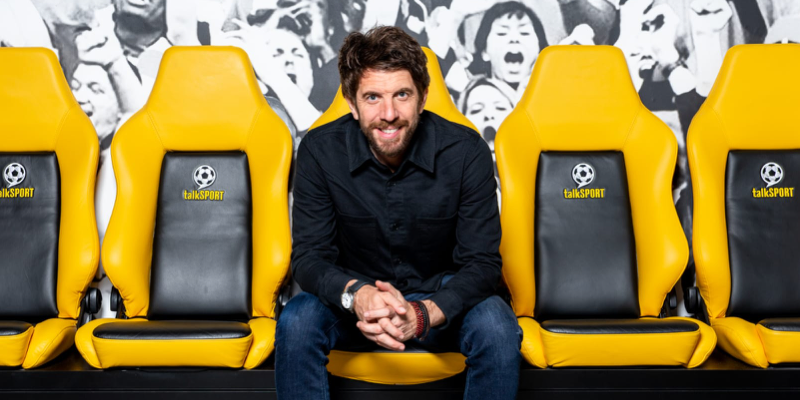 Andy Goldstein is taking over as the lead presenter of talkSPORT Drive joining Darren Gough and Darren Bent.

Meanwhile Adrian Durham takes over as talkSPORT’s main live football presenter across both Premier League and EFL coverage, as the station extends its coverage of all English clubs.

In other changes, Darren Gough will join Thursday Breakfast alongside Alan Brazil and Ally McCoist. He will also broadcast three talkSPORT Drive shows per week.

Listeners can still chat with Andy Goldstein on The Sports Bar on Mondays where he will continue to host the show for which he is known.

Hugh Woozencroft will be in the chair on Thursday and Friday nights with a fully visualised phone-in on Saturdays as part of the station’s GameDay coverage.

Head of talkSPORT, Lee Clayton said: “We’re shaking up the schedule at talkSPORT with a new formation that will see us share our all-star cast across our award-winning programming to keep it fresh, insightful and entertaining as we cross-promote our talent and our output.

“Andy Goldstein is a brilliant, sharp and super-talented presenter, who will bring fun to Drive. I imagine Gough and Bent will have to be on the look-out; there won’t be a moment’s rest! Having been a hugely popular presenter of The Sports Bar, Goldstein will deliver a different Drive show.

“Plus Breakfast is getting bigger with the legendary Darren Gough joining Alan Brazil and Ally McCoist making Thursdays a bonafide breakfast of legends.

“Jamie O’Hara takes the lead role in a turbo-charged Sports Bar, taking calls from football fans, from Tuesday-Thursday. O’Hara is never shy with an opinion and, alongside resident Jason Cundy, they will offer unique dressing room insight and damning verdicts. It should come with a health warning.”

Andy Goldstein said: “Hosting the The Sports Bar has been amazing and I am proud to have had such a brilliant, loyal and well informed bunch of listeners to share the journey with. I am hugely excited to get my teeth into talkSPORT Drive, and am looking forward to welcoming you all as we stride forward together with the biggest sports news, the best guests and the usual, high octane, hilarity and insight. I can’t wait to take some of the best callers from The Sports Bar to Drive, but obviously leaving the dross behind… you know who you are!”

Jamie O’Hara said: “The Sports Bar is the late night destination for sports fans. I can’t wait to lead the show and tackle all the big news, moves and opinion with fans.”

Need a new or improved logo for your radio station? Visit OhMy.Graphics and see how awesome you can look.
Posted on Monday, August 23rd, 2021 at 9:39 am by RadioToday UK