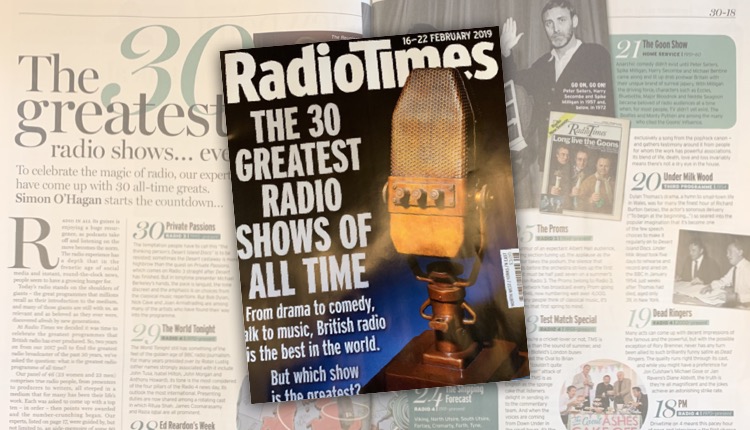 The Radio Times has named what it considers to be the ’30 greatest radio shows of all time’ – but every single one is a BBC programme.

The magazine’s new edition contains a six-page feature counting down the shows – from Radio 3’s Private Passions at number 30 to Desert Island Discs at number 1.

But the feature has attracted criticism that no commercial radio shows are included. Former radio executive John Myers wrote on Twitter: “I’m sorry, but this is the most insulting and ill informed article on radio I’ve read in a long time. What they are implying is that not a single programme in the history of commercial radio is worthy of being on the list. Love the winner but flawed overall + judges mostly BBC.”

Siobhan Kenny, CEO of Radiocentre – the trade body for commercial radio – tweeted: “Hello @BBC @RadioTimes top 30 radio programmes ever. Is there a world beyond the BBC? Apparently not.”

The panel of ‘experts’ that have helped to compile the Radio Times list are predominantly current and former BBC producers, presenters, contributors newsreaders and managers. The remainder include radio critics and columnists such as Gillian Reynolds, David Hepworth, Fiona Sturges – and the author of The Radio Companion, Paul Donovan.

At the start of the article, the Radio Times delights in telling us that the panel of 46 people is made up of 23 women and 23 men and “comprises true radio people, from presenters to producers to writers, all steeped in a medium that for many has been their life’s work.” We’re told that the 46 panelists each came up with a Top 10, with points then awarded to compile the overall Top 30. The experts were given a list of 80 radio programmes – as an ‘aide memoire – but it’s not known whether any commercial radio shows were on that list.

There are loads more to choose from, but those are just a few names we think are right up there. Enjoy the debate!”

23 of the 30 on the Radio Times list are are Radio 4 or Home Service programmes, 3 are from Radio 2 or the Light Programme, 3 from Radio 3/Third Programme and one from Radio 1 (John Peel). Other than John Peel’s show the only music radio format included is Radio 2’s Wake Up To Wogan, which is at number 12.

Comedy programmes such as The Goon Show, Just A Minute, I’m Sorry I Haven’t A Clue, Round The Horne, Hancock’s Half Hour, On The Hour, Dead Ringers and The News Quiz all make the grade, along with news programmes including Today, PM and The World Tonight. Test Match Special is the only sports programme to make the list.

I’m sorry, but this is the most insulting and ill informed article on radio I’ve read in a long time. What they are implying is that not a single programme in the history of commercial radio is worthy of being on the list. Love the winner but flawed overall + judges mostly BBC. https://t.co/1VEU64V7j7

Hello @BBC @RadioTimes top 30 radio programmes ever. Is there a world beyond the BBC? Apparently not