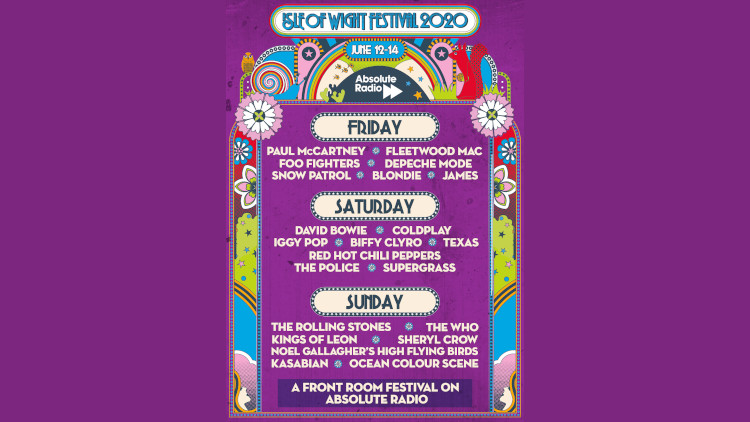 Absolute Radio is bringing back its Front Room Festival format next month to celebrate some iconic performances from the Isle of Wight Festival in place of the real thing.

On what would have been the weekend of the event – 12th to 14th June – Absolute will air performances from the archives from the likes of David Bowie, Paul McCartney, The Rolling Stones, Foo Fighters, Coldplay, The Who and Fleetwood Mac.

In the case of Bowie the tracks will be from his last ever live UK performance, while The Who’s seminal 1970 festival set will also be broadcast.

More than 20 sets will be broadcast over the weekend, with presenters Sarah Champion, Ben Burrell, Danielle Perry, Ross Buchanan, Andy Bush and Richie Firth introducing them. Listeners will also get a chance to win tickets for the 2021 Isle of Wight Festival.

The line-up has been announced on air this week by Absolute Radio’s Andy Bush and Richie Firth. They said: “Everyone is missing live music right now, and while we’re devastated we won’t be back at The Isle of Wight Festival this year, we think this is the next best option. With so many highlights from over the years, we believe this is the greatest festival line-up of all time. We know that people are going to be able to crack open a beer and pretend they’re really in the front row! We can’t wait.”

Here’s the line-up for the Isle of Wight weekend this year on the station: