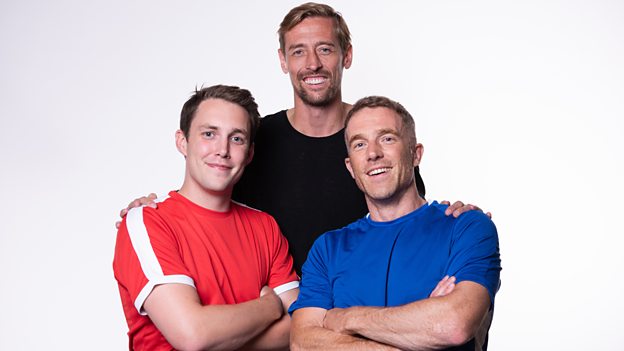 Peter will be joined by BBC Radio 1’s Chris Stark and the BBC’s chief sports writer Tom Fordyce and offer them lessons in everything from dressing rooms, transfers, getting free stuff and where to sit on the team bus.

In That Peter Crouch Podcast the 6ft 7in striker, known as Twitter’s funniest footballer, will lift the lid on what really happens at some of the biggest football clubs in the world.

The first three episodes of That Peter Crouch Podcast will be available to download from today, Wednesday 19 September, with new instalments released weekly.

Peter Crouch says: “I’ve been a footballer now for almost two decades, and I have seen some truly remarkable things. I want to take listeners with me inside this wonderful, bizarre world, although I have to be honest: I had no idea what a podcast was before we started this, so I’m not really sure what I’m doing. Is sitting in the pub with two friends talking football a podcast? I hope so, otherwise we’re in trouble.”

Tom Fordyce says: “You spend time with Peter Crouch, and you find out all the things you always wanted to know about football but either never had the chance to ask or never had a footballer open enough to tell you. Also you spend half the time crying with laughter and the other half thinking how you can’t wait to repeat that story to your mates, and this can only be a good thing.”

Chris Stark says: “I’ve loved recording the first three episodes, mainly because I can’t believe how honest Crouchy is. He’s probably the best storyteller in football, and he’s played with Beckham and been managed by Sven – so there’s something for everyone!”

That Peter Crouch Podcast adds to BBC Radio 5 Live’s raft of podcasts which includes the Flintoff, Savage and the Ping Pong Guy, Football Daily, Tailenders, The Cut, Rugby Union Weekly, Fit & Fearless, Chequered Flag, Brexitcast and You, Me and The Big C.