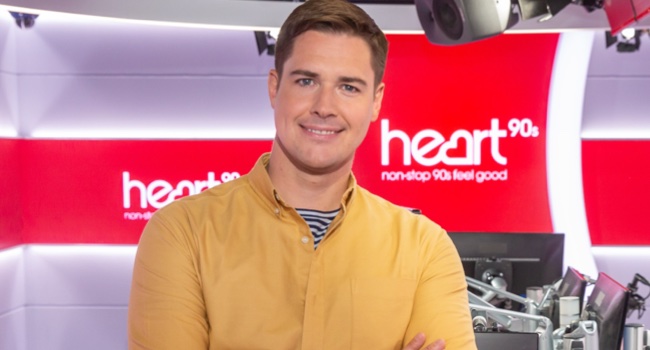 It’s the first of five new services all going national on DAB in the next week – as teased by Global over the last few days.

Heart 90s will officially launch tomorrow at 6am – Thursday 29th August – with non-stop music from the 90s and joins Heart, Heart Dance and Heart 80s which all have live national breakfast shows from Leicester Square.

Kevin Hughes currently hosts Saturday afternoons on Heart, and previously presented Drive on Heart South Wales. Before Heart, he hosted “Total Access” on Capital FM and the “Music Control” network evening show on the GCap One Network. He began at BBC Radio Wales hosting the evening show and Welsh Top 40, after he won Best Male Presenter at the Student Radio Awards.

The other four stations will be announced in the next few days, all brand extensions to Global’s current services. The teasers suggest the brand extensions will come to Smooth and Capital XTRA, plus another from Heart.

James Rea, Managing Editor of Heart tells RadioToday: “We’re incredibly excited to reveal the latest addition to the Heart brand – Heart 90s – launching tomorrow! The playlist is pure 90s feel good nostalgia and Heart 90s will celebrate the greatest hits from this iconic decade, which produced some of biggest feel-good records of all time.

“It’s a very exciting time for the nation’s biggest commercial radio brand and we have yet more huge news coming tomorrow!”

Bauer’s 90s station – Absolute 90s – launched in June 2010 in London before moving to the Digital One multiplex later the same summer. It remained on D1 for five years before being replaced by Magic. It then returned to the first national DAB multiplex for a year until January 2019 when its space was taken by Kisstory and Absolute 90s moved to the SDL national multiplex.

Buckle up, Global is going for it. We’ve known brand extensions are a big thing for commercial radio, and since launching on its own player in 2017 with 30 services, Global will have seen listening stats for each one.

These five new services must be the most popular ones – the teaser video suggests a country station, a chilled station, an old-skool reloaded station and a disco/70s station could be coming.

We can’t help feel these new stations are in reaction to Bauer launching seven new services earlier this month, but timescales suggest the plan to put more services on D1 was made long ago. Plus – these are full-on radio stations rather than 24/7 streaming automation.

What’s next? Another Heart spin-off? We’ll let you know tomorrow!

Need a new or improved logo for your radio station? Visit OhMy.Graphics and see how awesome you can look.
Posted on Wednesday, August 28th, 2019 at 10:31 am by Roy Martin