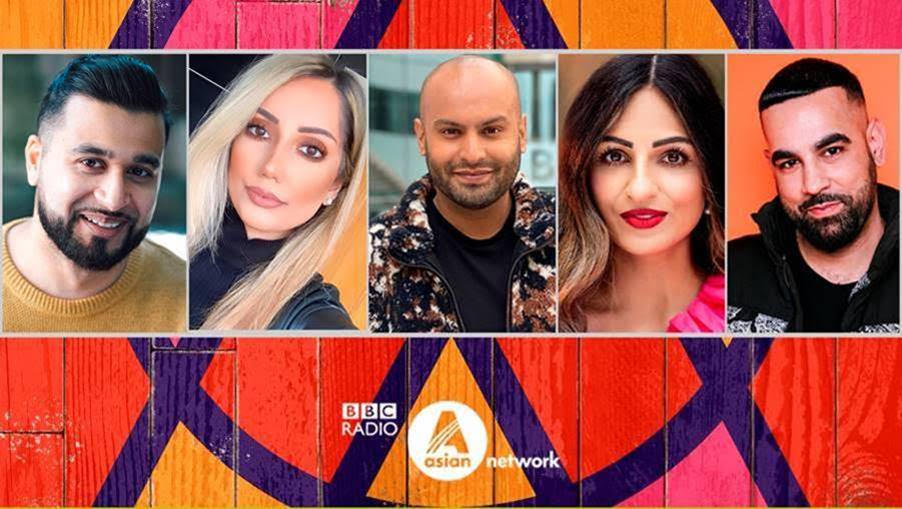 The first change will introduce four new shows to the weekly schedule as part of Ahmed Hussain’s commitment to increasing British Asian representation and popular South Asian music culture across the station.

The station is also going 24 hours with the overnight hours being used for repeating its own content rather than simulcasting shows from Radio 1.

Current Entertainment Reporter for BBC Asian Network Haroon Rashid, will host a brand new Saturday Morning Show Beyond Bollywood (10am-1pm). He will look at all of the newest and biggest cinema and on-demand hits from the Bollywood genre and the sub-continent.

Haroon Rashid says: “I can’t wait to get started on Saturday mornings. I’ve been covering entertainment for six years and now I’ve got my own show! I want Beyond Bollywood to be more than movies – it’s a place we can celebrate yes, film but also TV dramas, streaming shows and music.

Also joining the station will be presenting duo Nikita Kanda and Mistah Islah. They will host a brand new show on Saturday afternoons (1-3 pm).

Nikita is a TV and radio presenter who has hosted her own shows specialising in British Asian Music. She has previously worked with new presenting partner Mistah Islah for comedy series ‘Test My Slanguage’ and is currently co-host of WHAT THE DUCK?! podcast.

Mistah Islah is an actor & filmmaker who started his career on YouTube. Following two comedy series’ produced and directed by Islah (Mandem On The Wall and Corner Shop Show), he has recently gone on to win ‘Youtuber of the Year’ at the British Bangladeshi Fashion and Lifestyle Awards and ‘Best Online Channel’ at the Asian Media Awards in 2019.

Nikita Kanda says: “Excited is an understatement…It’s a dream come true to be presenting for BBC Asian Network, which I’ve always loved and listened to for years! Ready to switch things up, bring new energy and a new vibe to the show. So glad to be working with my friend Islah, it’s going to be hilarious! Can’t wait for this journey to begin. Bring on 2021!”

Mistah Islah says: “Coming from a filmmaking, acting & YouTube background this is a fresh new step for me in the world of radio! My Mum’s always told me to get a proper job! BBC Asian Network is going through some exciting changes and it’s an honour to be a part of it with my G Nikita!”

Nayha started her career on local radio shows and went on to present the Chart Show on Westside Radio, weekend shows on Vibe FM & most recently became the daytime presenter on Aspen Waite Radio.

Nayha says: “I have always strived to pursue my dreams and to get the opportunity to work for BBC Asian Network, doing a show where I will be at the core of popular and new music, is the dream! Music is my passion and doing the Chart Show, sharing that passion with listeners is a dream come true. I’m so excited to get stuck in, to make this show a true representation of what our British Asian scene is all about with something fresh!”

The Pakistani Show is a new commission for Sunday evenings (5-7 pm) which aims to showcase the best in British Pakistani music, entertainment and culture. This show will be an opportunity for new radio talent who will alternate each week, allowing them the chance to host the show in their own unique way.

As part of a push towards an early start to the weekend, BBC Asian Network will introduce a new Thursday night show (7-10 pm) which will be presented by AJD. As well as this, all Friday and Saturday evening shows will start an hour.

AJD says: “Music has been an integral part of my life playing as a DJ around the globe. To be able to showcase top musical elements across a further three hours to add to my show portfolio at the BBC Asian Network is something I, as always, will treat with the utmost pride. New energies, new vibes across another 3 hours on the main station for Asian music, let’s do this!”

Ahmed Hussain, Head of Asian Network, says: “I want to welcome all of our new presenters to the Asian Network family! Being British Asian means so many things to so many people, and our new changes mean that we are actively evolving to ensure that we are representing the culture right across the spectrum. I look forward to hearing a new weekend offering from Thursday’s onwards, alongside our current outstanding DJs and presenters. We’re also going 24 hours which means more music all day AND night. I’d like to thank Preeya, Eshaan, Sunil, Nim and Waqas for their dedication and passion to all the shows they’ve presented with us. We’ll be sure to celebrate their final shows!”

It was also announced today that Asian Network will be saying goodbye to Preeya Kalidas, Eshaan, Sunil and Nim and Waqas’ on air shows.

Since joining the station in 2015 Preeya has entertained listeners on Saturday afternoons.

Eshaan, Sunil and Nim joined the station in 2019, delivering the ‘But… Where Are You Really From?’ podcast. Throughout this year the trio have been key in covering Saturday mornings on the station and they will continue with their comedic podcast for the network.

Waqas will transition to his previous production role for the station and Yasser will continue to present BBC Asian Network’s Drivetime show Monday to Thursday.