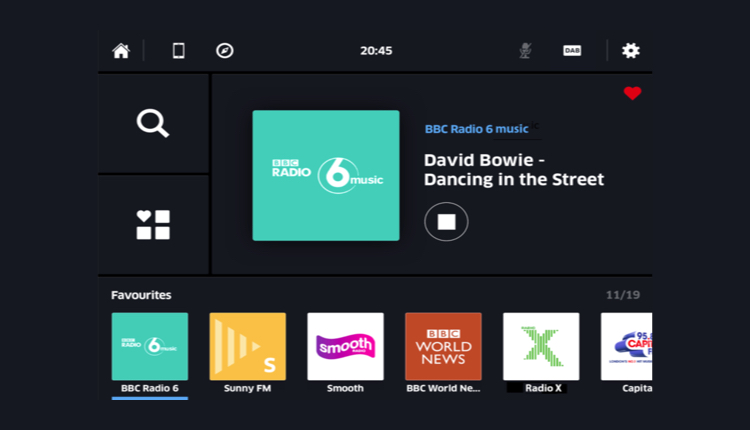 Radioplayer has unveiled the Reference Radio, a prototype touchscreen radio for dashboards, designed to show how smart ‘hybrid’ technology can transform in-car listening.

It’s the latest move in a series of partnership projects aimed at helping car companies and broadcasters deliver a better user experience in the vehicles of the future.

The ‘hybrid’ prototype is multiplatform, able to play DAB digital radio, FM, and Internet radio streams. But unlike most modern car radios, the Reference Radio shows a single list of stations across all those platforms. There’s no need to select different sources like DAB, FM, or Internet first – the driver just taps a station logo to play it, and the system does the rest.

The new technology was demonstrated at an industry event in Berlin, in front of an audience of radio professionals and representatives from car companies. The interface was shown fully working, on a 7-inch Android touchscreen – the size that’s often seen in modern car dashboards.

Radioplayer says safety has been a key factor in the design, reducing ‘driver distraction’ with an easy, intuitive interface. A large display shows what’s playing, and the driver switches between favourite stations by tapping a logo, swiping the screen, or pressing the buttons on the steering wheel. In the next phase of development, voice control will be tested, along with podcasts and personalisation.

Michael Hill, Managing Director at Radioplayer, said: “We’ve distilled years of research, development and testing into this prototype, which will be the catalyst for a long-overdue conversation between broadcasters and car companies. The Radioplayer Reference Radio shows that radio can be simple, smart and sexy in the connected cars of the future.”

The Reference Radio is the culmination of years of research and development with industry partners like WorldDAB, Digital Radio UK, RadioDNS, and Audi. The prototype shows how broadcasters like the BBC, Global, Bauer, and dozens of international radio groups want their stations to appear in the car radios of the future.

Car companies, equipment manufacturers, and all interested parties are invited to feedback on the prototype. Future versions of the design could be available to them to adapt for their dashboards, along with feeds of Radioplayer station data to power the experience. This is delivered via the ‘WRAPI’ (Worldwide Radioplayer API). You can contact Radioplayer to discuss the partnership possibilities by emailing: contact@radioplayer.co.uk

A video demonstration of the Reference Radio in action can be seen here: