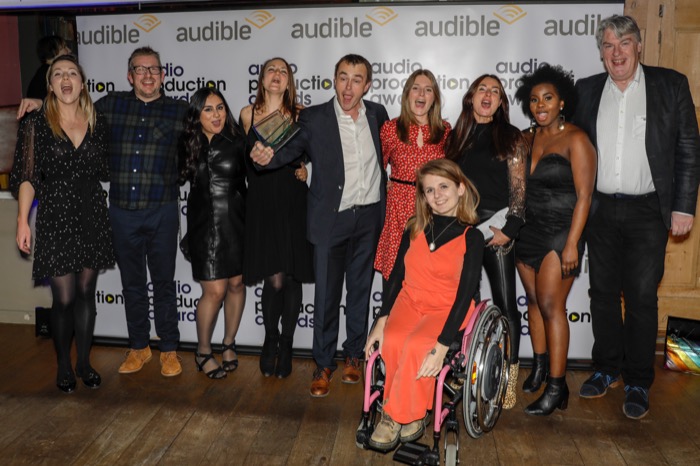 The winners have been revealed for the Audio Production Awards at a gala evening at the BFI Southbank, hosted by Tommy Sandhu.

The special Gold Award went to the Mental Health Minute, coordinated by Radiocentre and produced by Somethin’ Else in 2018 and TBI Media in 2019.

The Mental Health Minute was broadcast in May across hundreds of radio stations, including BBC Radio 1, Radio 2 and 5 Live, BBC Local Radio, as well as networks including Global, Bauer and Wireless and community stations.

It reached a combined audience of over 40 million people, and featured His Royal Highness The Duke of Cambridge.

Elsewhere there was a special moment when Hilary Ineomo-Marcus presented the ‘Grassroots’ award, which he was unable to present last year because he was facing potential deportation to Nigeria. He appeared on stage, greeted by a standing ovation, alongside Miranda Sawyer, who stood in for him last year and alerted the audience to his situation. He then presented the Gold award to the winner, AMILIAH.

Fresh Air Productions, the company set up by Neil Cowling, which has been growing a specialism in branded podcasting as well as radio, won ‘Production Company of the Year’.

Other winners included Dave Masterman from Manchester’s Audio Always, who won Gold in the ‘Gethin Thomas Award for Best Comedy Producer’, as well as silver for ‘Best Entertainment Producer’.

In music, Folk on Foot’s Natalie Steed won Gold in the ‘Best Music Producer’ category, while Trevor Nelson won ‘Best Presenter – Music’ for his work with production company Somethin’ Else.

Kellie While, Chair of AudioUK, which organises the APAs, said: “In the APAs’ tenth year it was wonderful to have great moments like the reception for Hilary Ineomo-Marcus and the recognition given to Mental Health Minute. And as always a wide range of production companies and talent have been rewarded for their great work across radio, podcasting and audiobooks. The public’s appetite for quality audio content is growing rapidly both in the UK and internationally and these awards show that we have a thriving sector able to meet the demand.”

Steve Carsey, Senior Director of Original Programming, Audible, which sponsors the Awards, said: “More people than ever are enjoying expertly-produced audiobooks, dramas, podcasts and radio, and at Audible we’re excited to be part of this evolving landscape, investing an increasing amount in a huge range of innovative listening experiences across all genres. We’re very proud to join AudioUK again this year in recognising excellence and craftsmanship of producers, presenters, technicians, sound-designers and performers in this vibrant industry. Congratulations to all the winners and nominees.”

Audio Performer of the Year