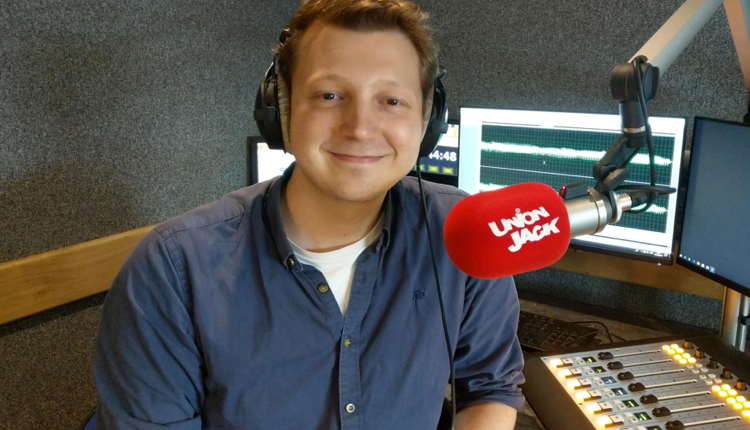 The station says Adam will be the youngest national breakfast show host in the UK, and The Full English will be the first live show on the station since it launched in 2016.

Adam was awarded the Best Male winner at the Student Radio Award 2018 and presented a one-off show on BBC Radio 1 following his win.

The Full English – weekdays 7am till 9am from this Friday – will feature silly games and will make Union JACK’s listeners the star of the show; celebrating the weird and wonderful people of Great Britain and inviting them to ‘co-pilot’ alongside Adam. Plus, the first show will feature an authentic Town Crier, delivering listener messages live on air in a style that will set the future tone of The Full English.

Adam cut his teeth on student radio, presenting multiple shows on RAW 1251AM during three years at Warwick University, and after winning his SRA award, BBC Radio 1’s Greg James said Adam “will almost certainly take my job one day.”

Giles Gear, Programme Director at Union JACK, added: “The team at Union JACK radio recognised Adam’s potential way beyond a one-off show and this is evident in him being rewarded with his own daily breakfast show. Don’t think that this is going to be like every other breakfast show though – The Full English is the antidote to the exclusive, ego-driven breakfast show of the wider radio landscape; we’ll be letting our listeners lead the way, not our famous friends.”

Adam said: “I am completely overwhelmed to have my own breakfast show on a national radio station and cannot wait to get started! I absolutely love Union JACK radio – it’s so refreshing, completely nonsensical and has the best listeners in the world. I’m really excited to put them at the forefront of this thing, alongside the brilliant music. Bring it on!”

After months of planning I can finally tell you that I’ve somehow GOT MY OWN NATIONAL BREAKFAST SHOW (huzzah!)

It’s on the brilliant @unionjackradio and it’s going to be very silly. So silly that we got an *actual* town crier to announce it. Very excited to get started! https://t.co/GluacFdsDE

Need a new or improved logo for your radio station? Visit OhMy.Graphics and see how awesome you can look.
Posted on Monday, September 9th, 2019 at 1:13 pm by Roy Martin