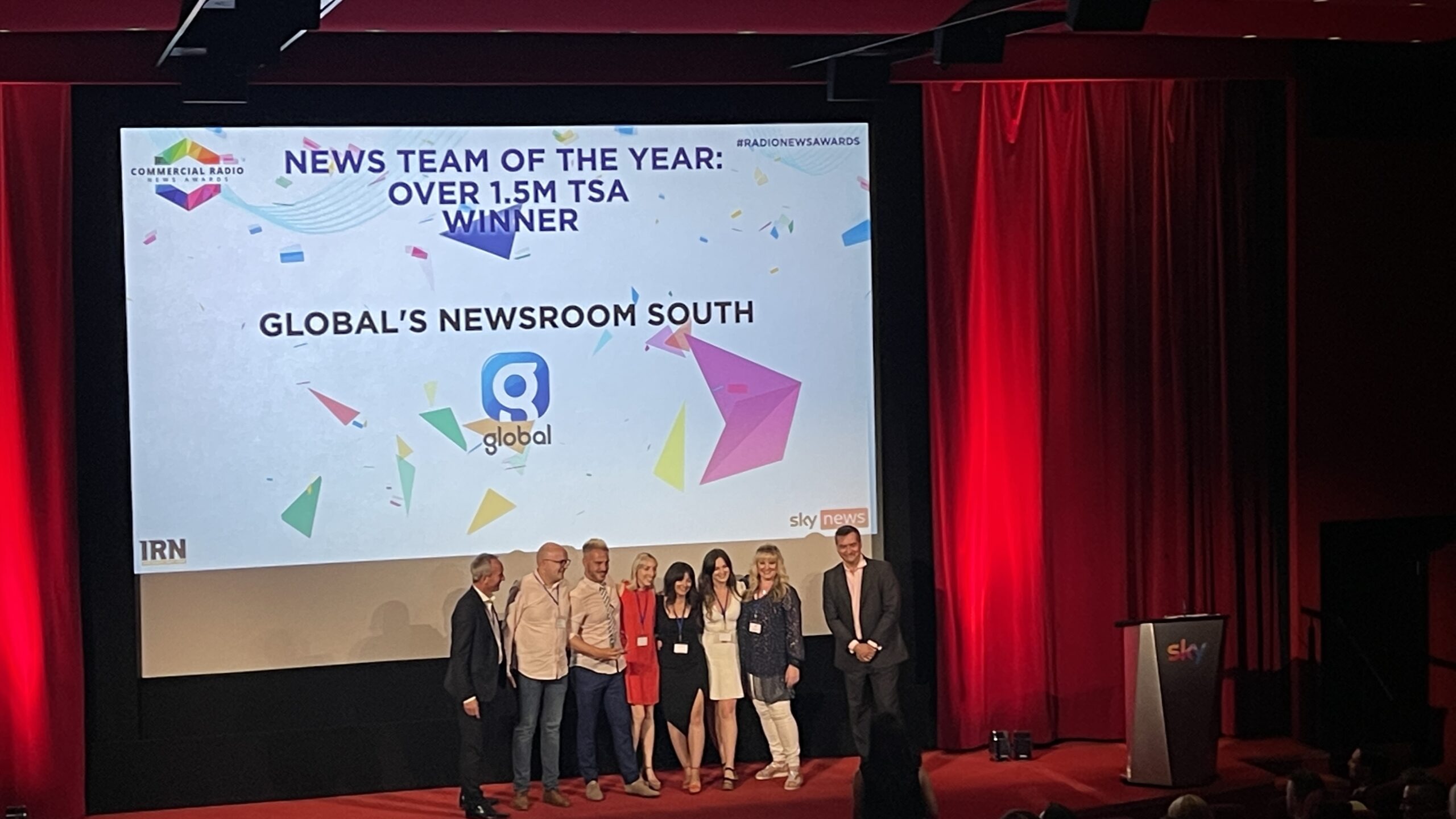 An innovative campaign about preventing male suicide in Merseyside has been recognised twice at the 2022 Commercial Radio News Awards in association with IRN and Sky News.

Radio City’s ‘The Iron Men’ featured men sharing their stories and messages of hope having turned their own lives around. The entry won the ‘Best News Story or Coverage’ category and ‘Best News Special or Campaign’ with judges describing it as ‘positive radio that identified a problem, got testimony from those affected and brought solutions.’

The event, hosted by Sky News Daily podcast presenter Niall Paterson, celebrates excellence in commercial radio news and sport and was held in person at Sky Cinema for the first time in three years.

Global’s Newsroom South won ‘News Team of the Year’ in the ‘over 1.5m TSA’ category, with judges describing it ‘the strongest entry in a very competitive field’ and praising its ‘outstanding, comprehensive and compassionate Covid coverage.’

The ‘News Team of the Year’ in the ‘under 1.5m TSA’ version was MFR. ‘A wining entry that showcased local radio news at its best – serving the audience with stories that really matter to the local community’ according to the judging panel.

Hits Radio UK Network was awarded the ‘Best Interview’ title for ‘Conversion Therapy: Pete and Jeremy’s stories.’ The judges said they were stopped in their tracks by ‘emotional, fascinating and jaw-dropping accounts of gay conversion therapy in the past which would have had a massive impact on today’s younger audiences.’

Charlotte Sullivan from Global’s Newsroom East was named ‘Reporter of the Year’ in the ‘over 1.5m TSA’ category. ‘Investigative journalism at its best’ cited the judges describing her exclusive on Covid testing scams in Spain a ‘compelling listen.’

The Reporter of the Year in the ‘under 1.5m TSA’ category was awarded to Matthew Hutchinson from Greatest Hits Radio Swindon.’ Matt’s reporting is ‘full of energy’ according to judges who said he ‘puts a big focus on his local audience.’

Caitlin Hutchison from Global’s Newsroom Scotland was named ‘Newcomer of the Year’ with judges commenting that she is ‘a hugely impressive young journalist who delivers confident and authoritative bulletins as well as lively on-scene reporting.

In the Newsreader of the Year categories, Louise Easton from Greatest Hits Radio London won the ‘over 1.5m TSA’ category as a result of her ‘delivering relatable bulletins with power and punch.’ Free Radio’s Matt Maddren was the winner of the ‘under 1.5m TSA’ version of the award. His ‘on-location style offers authenticity and colour’ according to the judges who also praised the inclusion of ‘uplift’ in is bulletins.

The Student Journalist of the Year award, which is supported by the Broadcast Journalism Training Council, went to Oliver McManus from Bournemouth University. He was commended for his work ‘using exclusively sourced data to shine a light on the huge numbers of students accessing mental health support.’ Judges said ‘his powerful interviews laid bare the sheer scale of the issue.’

The final award of the ceremony, the prestigious Gold Award for an outstanding contribution to commercial radio news, was presented to Bauer’s Head of News and Sport in Scotland Lorraine Herbison.

Colleagues described her as an ‘inspirational leader who has risen through the ranks as a result of her enormous talent, energy, enthusiasm and determination.’

Originally from Northern Ireland, Lorraine Herbison moved to Glasgow almost 30 years ago to work in newspapers. She was later headhunted to join Radio Clyde as chief reporter before moving up the career ladder to her current role.

Her personal achievements include commentating live from Sri Lanka when Glasgow won the bid to host the Commonwealth Games; broadcasting live from huge news events like the Clutha helicopter disaster in the city and co-hosting the overnight ‘Referendum Live’ show when Scotland voted against independence.

She currently sits on the Board of Radio Clyde’s Cash for Kids and the Broadcast Journalism Training Council and has been instrumental in helping develop and nurture young talent in the industry. 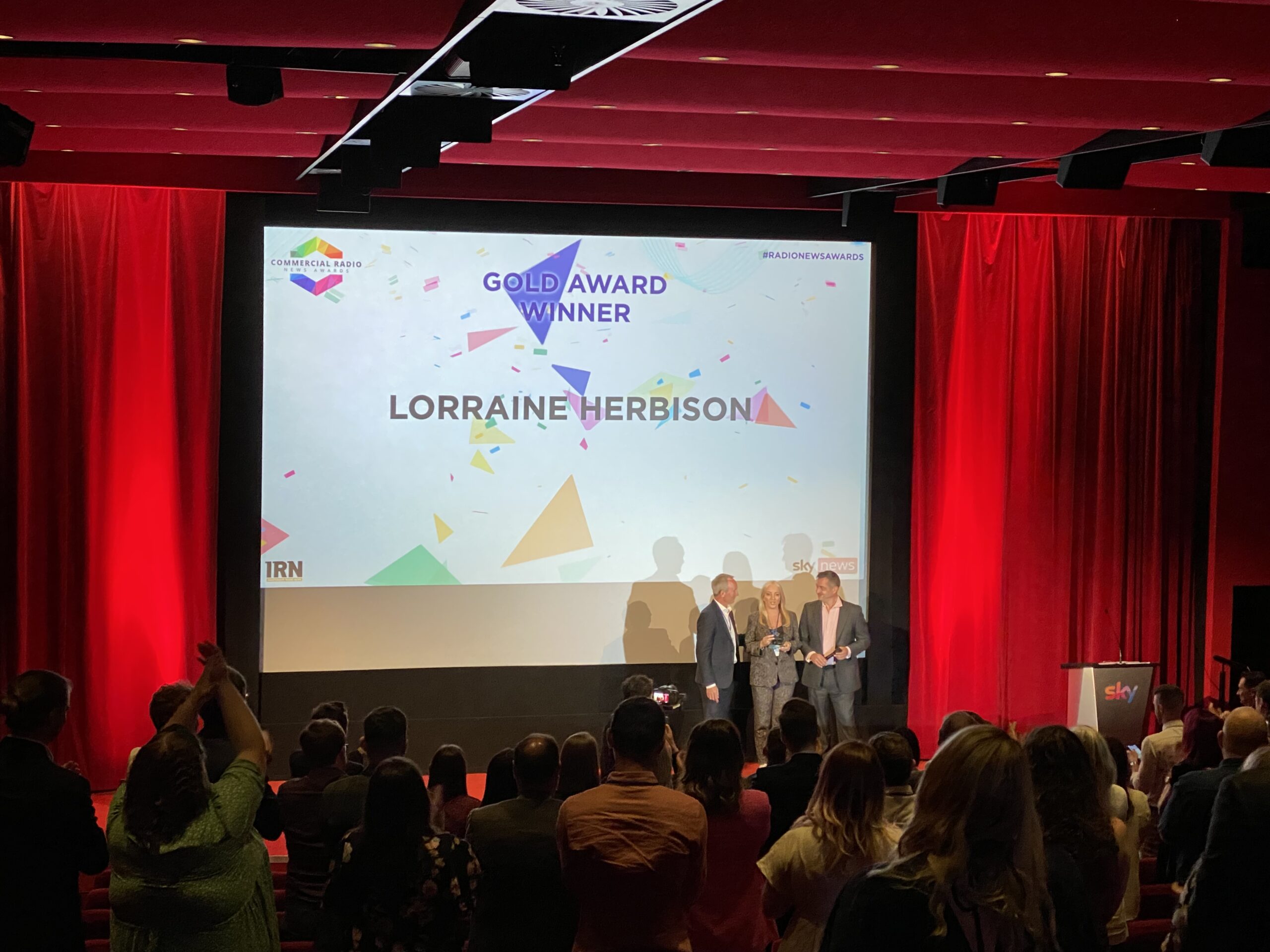 IRN Editor and Head of Radio at Sky News, Dave Terris said: “It has been a relentless year reporting the news that matters to a record number of people tuning in to commercial radio news. The awards prove there is a vast array of talent in the industry providing a highly valued and trusted service. Congratulations to the winners and nominees who deliver excellent content with impact at a time of economic uncertainty.”

IRN Managing Director, Tim Molloy said:
“Congratulations to all the winners and runners up! It was a pleasure to host these awards again in person and see the reactions on people’s faces as they came up on stage and all the nominees deserve our praise and recognition for their excellent entries, which together provided an excellent showcase of why listeners trust the news they hear on commercial radio.”

Need a new or improved logo for your radio station? Visit OhMy.Graphics and see how awesome you can look.
Posted on Thursday, July 7th, 2022 at 6:08 pm by RadioToday UK