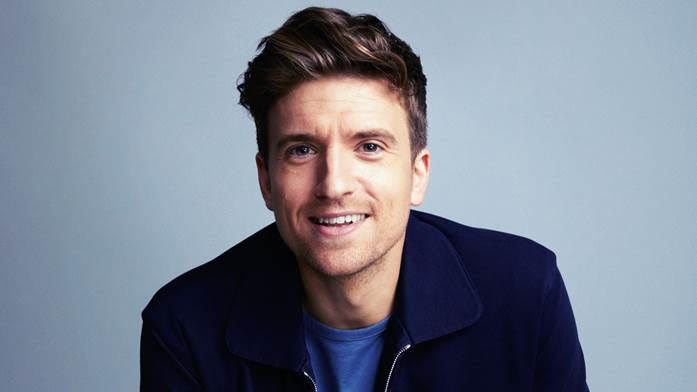 BBC Radio 1 Breakfast presenter Greg James has signed up to be a regular columnist for the Waitrose & Partners Weekend newspaper.

Greg, who co-wrote the children’s book series, Kid Normal, will have his first column published today in which he talks about his love of flan and why he is a fan of Waitrose.

Other columnists for the magazine include BBC Radio 2’s Jeremy Vine and Phillip Schofield.

Ollie Rice, Editor-in-Chief of Waitrose Weekend says: ‘We’re delighted to welcome Greg to the Waitrose & Partners Weekend team. His positivity and wit will be wonderful assets to our paper – as well as his love of food, which is obvious in his first column. ’

Here’s how his first words look:

Where else can you measure success with a leg of lamb?

‘Would you like to do a column for Weekend?’ asked my agent on the phone. ‘What?’ I replied, wondering if she’d meant to call Prue Leith. ‘They saw your Instagram from New Year’s Eve of you pretending to do an in-store DJ set holding red wine and toilet roll, and assumed you were a fan.’

Can you be a fan of a supermarket? I mean, I’ve always liked the ‘Intense Adriatic Anchovies’ that live near the olives that should be disgusting, but aren’t. And when I was sad as a teenager, I’d go there to buy a Frijj Chocolate Milkshake and a loaf of Tiger bread, and eat it all in one sitting. So I guess I am a fan. Some of my school friends worked in the Bishop’s Stortford branch. One, Sam, was on the deli, and despite me mocking him for his hairnet, the joke was very much on me. It turns out he had unrivalled access to Black Bomber cheese, a privilege I still dream about. I’ve enquired about having a cheese fridge at Radio 1, but even drinking water near the equipment gets you on a watch list, so it was dismissed fairly quickly.

As I think more about how my life has intertwined with Waitrose, I remember a lovely little tale. It’s the origin of a phrase I say fairly often on the radio. I must stress I’m not sitting here wearing a monocle and lighting a tobacco-scented candle thinking that I invented the phrase, but I take some credit as it’s now used regularly on several shows as a shorthand for saying someone is successful, rich, or a bit grand.

It all happened one Sunday afternoon when I was at my parents in the aforementioned Bishop’s Stortford. I offered to do the shop for a roast dinner and, as I’m a fan, I wandered down to Waitrose. I gathered a glorious mini-trolley full of items and made my way to the checkout, where I recognised Luke, a nice person I went to school with, behind the till. We had a chat about Radio 1, checkouts, the zapper things people carry for the barcodes, and then the conversation dried up. This often happens when I mention barcodes to people. Dead air. Nowadays I’d play a song to get out of such an awkward moment, but I was at the till in a supermarket.

To fill the silence, Luke began commentating on the items as they moved slowly by me. ‘Oooh, anchovies [beep], nice. Veg [beep], chocolate milkshakes [beep, beep], two of those,’ said Luke. ‘Yeah, I’ve been a bit sad,’ I replied. ‘Potatoes… [beep]’ – and this was the moment: ‘A leg of lamb! [beep] Someone’s doing well!’ Someone’s doing well. It was perfect. A leg of lamb told Luke I was doing well. Like something out of an old sitcom designed to quickly signify success. I’ve used that wonderful phrase on the radio ever since – whenever a celebrity has announced they’ve bought a car for their parents, built their own recording studio, or launched a tequila, they’re all doing very well. So thank you, Luke. Hopefully the management training programme you were on at the time paid off and you’re now making your mark in the Partnership. In which case, someone’s doing well.

As well as cheese, I love a good flan. But it has to be a proper French flan. Or, to pronounce it properly, ‘Fluaaagh’. It’s the most delicious, custardy, wobbly thing on earth. I was trying to make one while writing this, and it’s now my strong recommendation that you shouldn’t. You’ll never make a better one than you could buy in a shop. The lesson here: know your limits. Know whether it’s best to bake or buy. On this occasion, buy.

Need a new or improved logo for your radio station? Visit OhMy.Graphics and see how awesome you can look.
Posted on Thursday, February 27th, 2020 at 12:00 am by Roy Martin

BBC Radio 1 passes a pasty across the country

Greg James thanks listeners as he leaves Drivetime