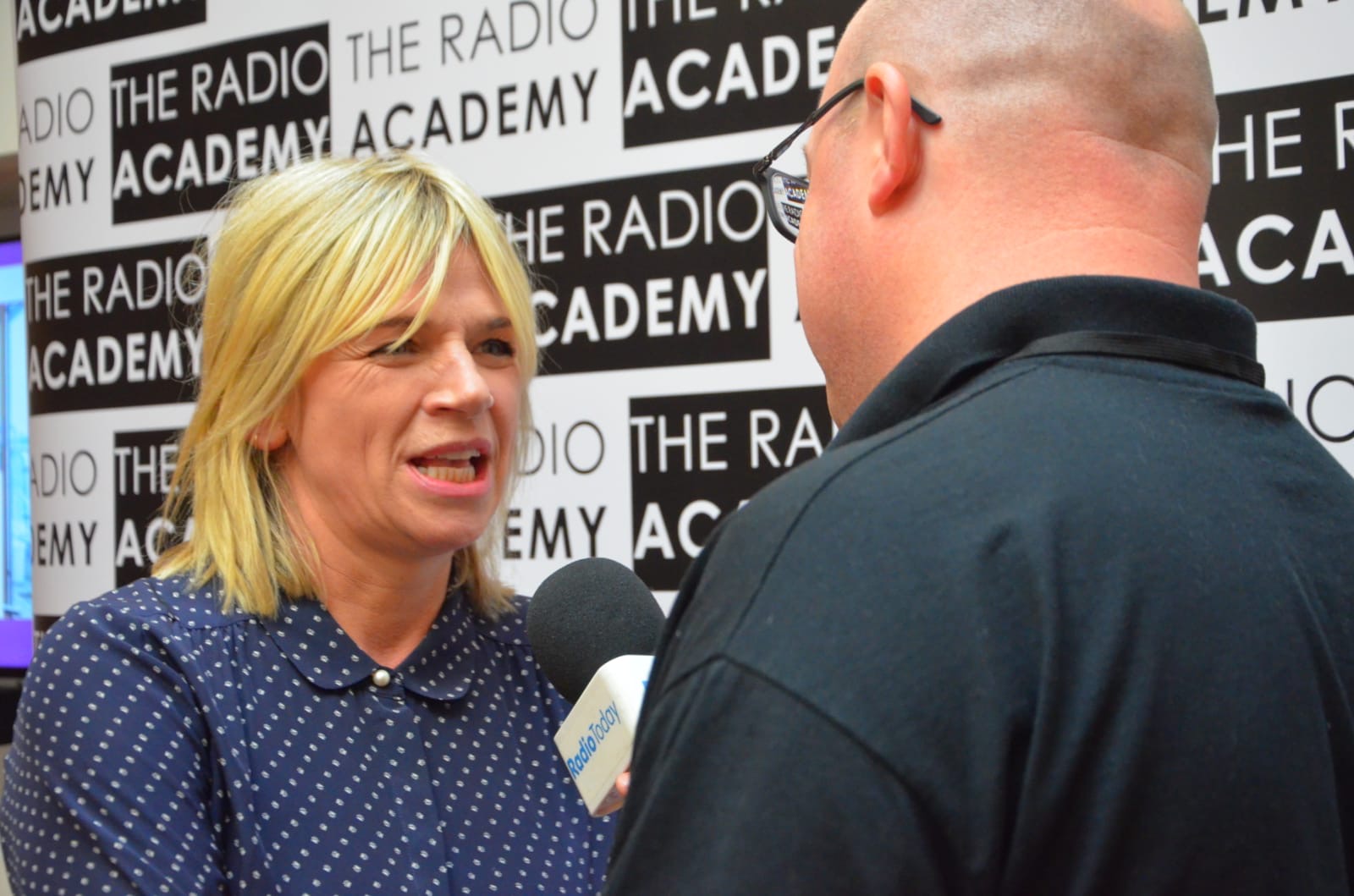 Zoe Ball has lost more than three quarters of a million listeners to her BBC Radio 2 breakfast show, according to the latest audience research from RAJAR.

Chris, meanwhile, has added 63,000 more listeners to his Virgin Radio breakfast show – now reaching 1,111,000 across the UK via the brand’s three digital radio stations (compared with 1,048,000 in Q1/19 which included some weeks where he hadn’t yet started). That helped Virgin Radio UK increase its overall reach as a station from 1.3m to 1.545m – a jump of 18% quarter on quarter.

Two new stations from Bauer make their debut in this RAJAR book – Scala Radio has posted a reach of 258,000 while Country Hits Radio – which isn’t on a national DAB multiplex but on a series of local multiplexes – begins life with 208,000. Greatest Hits Radio‘s first full figures show a reach of 715,000 (rising to 1.1m when you include the network of stations in Scotland that have the same format but have heritage names), while Hits Radio posts a national reach of 781,000 – that’s down 23k from this time last year.

Bauer Media‘s combined weekly reach is 18.1m, with digital listening for the group reaching a record high of 72%.

Global is celebrating its highest ever weekly reach (25.6m), hours (238m) and share (23.4%) as a group, with the country’s biggest four commercial radio brands being Heart (9.7m), Capital (8.2m), Smooth (5.7m) and Classic FM (5.6m). Kiss is 5th with 5.3m listeners. Bauer’s ‘Hits Radio Brand’ posts a reach of nearly 6.5m, but this includes both the Hits and Greatest Hits Networks as well as stations using heritage brand names and the new Country Hits Radio.

The new Capital Breakfast with Roman Kemp, Vick Hope & Sonny Jay reaches 3.796m – that’s an increase from Q1/19 but a drop of 164,000 from a year ago when the shows were presented regionally. The national show only launched on 8th April, a week into the RAJAR fieldwork for Q2/19. The new national Heart Breakfast with Jamie & Amanda launched towards the end of the research period, so figures for their new show will be in the Q3/19 data, published in October.

BBC Radio 2‘s drop in breakfast audience affects the reach of the rest of the station too, with the overall listening figure falling 763,000 this quarter – from 15.356m to 14.593m. Ken Bruce now has the biggest show on the station, with a weekly average of 8.489m to his 9.30-12noon programme. Ken says: “After 34 years as a part of the BBC Radio 2 family, I’m astounded that the allure of my daily grumpy musings, coupled with PopMaster, continue to entertain. Many thanks to the long-suffering listeners.”

Greg James posts his highest figures since taking over Radio 1 breakfast last summer – his Monday to Thursday show has 5.69m listeners aged 10+, compared with 5.44m last year. Dotty on 1Xtra’s figures are the best ever for the station’s breakfast show too – up 131k year on year to 509k for listeners over 10 years old.

KISSTORY‘s move from the SDL multiplex to Digital One has brought extra listeners – reach is up from 2.024m a year ago to a record high of 2.323m in Q2/19. KISSTORY is the biggest digital-only station in the UK, just edging both Radio 4 Extra and 6 Music by a few thousand. There’s growth for Kiss Fresh too, but the overall Kiss network is down 250k year on year to 5.379m.

And Classic FM’s More Music Breakfast with Tim Lihoreau and Moira Stuart has added 249,000 listeners in the past year, posting a 1.909m reach across the UK in Q2/19.

At Wireless, they’re celebrating more best-ever figures with a record 4.9m listeners and total hours of 31.7m to its national stations. As mentioned above. Chris Evans’ hours are up 18.9% quarter on quarter – to 5.35m a week. That’s helped Virgin Radio UK’s total hours top 10 million this quarter (up from 7.7m in Q1/19). The Virgin network overall – including digital stations Anthems and Chilled – attracts 1.67m weekly listeners and 11.02m hours. Chris Evans says: “Six months in, and we couldn’t be happier. Amazing guests, the best bands and certifiably the greatest listeners around.”

talkSPORT and talkSPORT 2 reach a combined 3.3m, that’s up 4% from last year. talkSPORT 2’s 439,000 reach is a record for the digital-only station.

Ashley Tabor OBE, Founder & Executive President of Global, said: “This is our strongest set of RAJAR results ever for Global, our biggest ever in terms of reach, hours and share. It is a true testament to the hard work of every Globaler. To now reach over 25.6m weekly listeners and for Heart, Capital, Smooth and Classic FM to be the top 4 commercial radio brands in the UK again is very special indeed. Heart retains its lead as the biggest commercial radio brand in the UK, with 9.7 million weekly listeners, and Heart 80s achieves its highest ever set of numbers. ‘The All New Capital Breakfast’ with Roman Kemp opens with a massive 3.8 million becoming, one of the top two commercial breakfast shows in the UK, second only to Heart. LBC’s performance is equally phenomenal with the station delivering its highest ever weekly reach, now at 2.4m across the UK, and Nick Ferrari also delivering his personal highest ever reach at 1.4m listeners. It goes without saying that I’m immensely proud of the Global team – their drive, focus, dedication and sheer hard work has truly reaped dividends.”

Dee Ford CBE, Group Managing Director Radio, Bauer Media, said: “Our growth in digital listening has been fuelled by the launches of two brilliant new radio stations which perfectly reflect the fastest growing music genres in the UK. Scala Radio and Country Hits Radio are truly ground-breaking and thoroughly engaging. It’s also fantastic that our much loved KISSTORY has become the number one digital radio station. Investment in the Hits Radio Brand has been stepped up with the newly launched breakfast show on Hits Radio hosted by Fleur East, Greg and James – we’ll see its first figures next quarter.”

Wireless CEO Scott Taunton said: “This is a superlative set of results for Wireless, with records smashed across our national brands and for Wireless. Virgin Radio has delivered a second quarter of record reach and listening hours for both the Chris Evans Breakfast Show with Sky and the station itself, which shows reach up 266% year-on-year. Chris and the team – including our partners at Sky – are continuing to set the pace in the breakfast slot. With the talkSPORT network and talkRADIO posting their highest ever RAJAR reach, our speech stations continue to deliver on our investment in sports rights and the best on-air talent. With a new tenant in No.10 and new Premier League packages which give us more live games than ever, we’re well set for the months ahead.”

James Purnell, Director of BBC Radio and Education, said: “With 34 million people tuning in each week, our stations and programmes continue to make a difference in the daily lives of our audiences. Our biggest radio stations are the most listened to in the UK and yet again we’ve seen how loyal listeners are with many millions of people tuning in each week. I’m delighted Radio 1 and 1Xtra proves time and again just how popular they are with listeners. I want our brilliant stations, programmes and podcasts to remain as relevant in people’s lives as listening habits continue to evolve. Already people are enjoying listening to us in different ways with a record 75 million downloads of Radio 4 programmes and podcasts this quarter as well as a record 7 million people listening live to our stations online and through apps.”

Ben Cooper, Controller BBC Radio 1, 1Xtra & Asian Network, said: “Record figures for Greg James’ Breakfast Show and fantastic results for Radio 1, as we continue to build our reach across all platforms and bring in new, younger audiences to the BBC.”

Alan Davey, Controller BBC Radio 3, said: “BBC Radio 3 encourages as many people as possible to explore experimental, boundary pushing programming, from classical, jazz, avant garde and world music to arts discussion , drama, poetry and slow radio through intelligent and adventurous content. It’s a compelling offer and that’s why we’ve seen audiences remain strong at over 2 million listeners, a 6% reach uplift to 2.03million year-on-year, a strong breakfast performance for our rivers focus this quarter with the highest figures since quarter 2, 2016 at 746k , and the highest overall Radio 3 station share since quarter 4, 2016 at 1.3%.”

JACK CEO Ian Walker said: “It’s in our DNA at JACK not to follow the traditional radio beliefs and formula, and to instead deliver something bold and new, that our listeners will love. This strategy has paid dividends again, with both national stations, Union JACK and JACK Radio, seeing an increase in both reach and hours, while the combined JACK network has doubled its reach in the last year, with an audience who are listening for longer than they ever have. This is only the starting point for us, with more and more exciting programming initiatives across our entire network set to follow.”

Need a new or improved logo for your radio station? Visit OhMy.Graphics and see how awesome you can look.
Posted on Thursday, August 1st, 2019 at 12:06 am by Stuart Clarkson