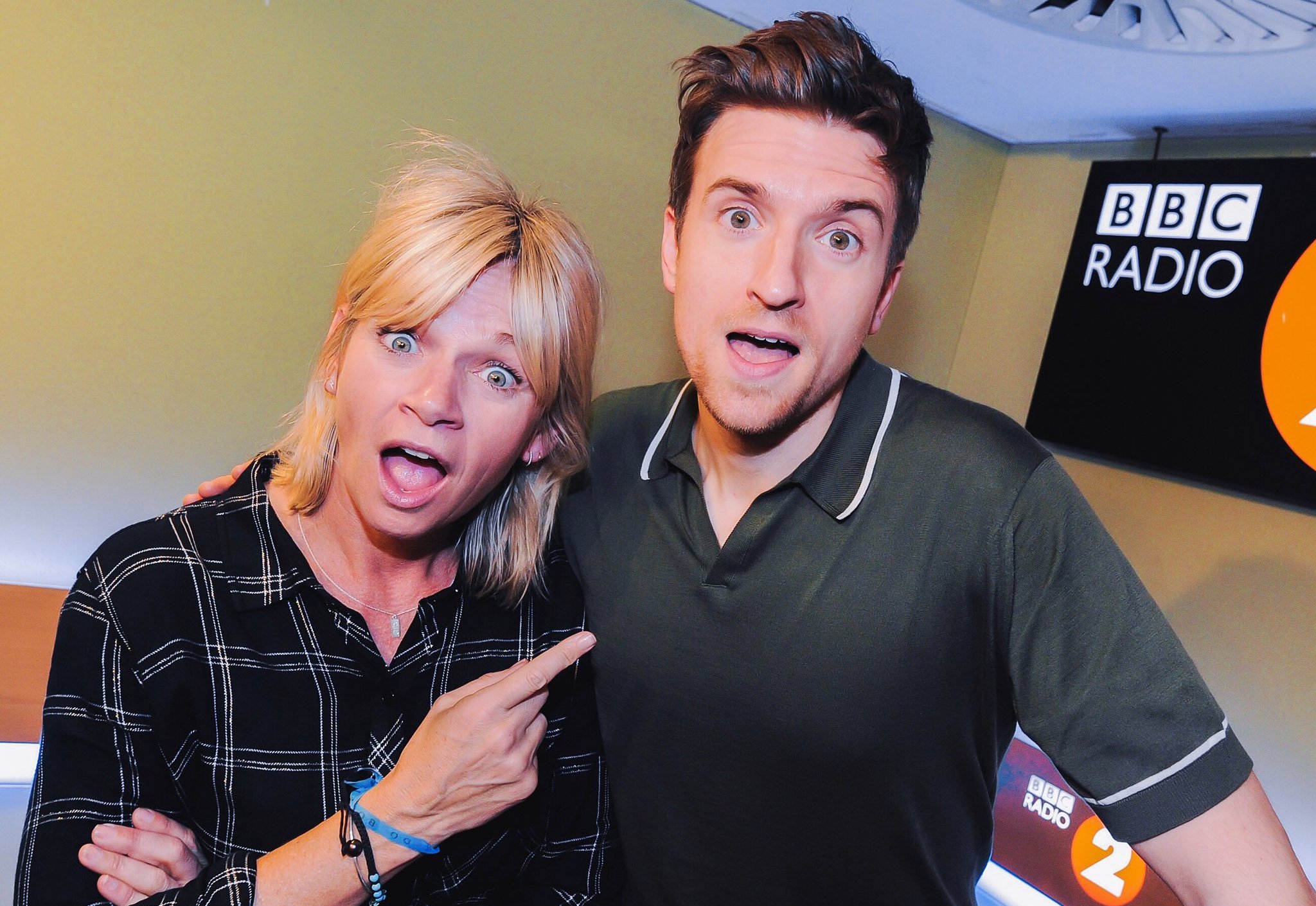 Zoe Ball has lost another 364,000 listeners to her BBC Radio 2 breakfast show in the latest radio listening figures from RAJAR.

While Zoe is still the presenter of the UK’s biggest breakfast show, the figures are the lowest for the slot in a decade – since Q3/2009 when Sir Terry Wogan had a weekly reach of 7.76m.

Meanwhile, Greg James has gained 180,000 new listeners for Radio 1’s Breakfast Show in the last year, with a reach of 5.049m. The station says Greg is the number one breakfast show among 10-29-year-olds across the UK.

Behind Zoe,’Today’ and Greg are Heart’s Jamie Theakston and Amanda Holden, who debut with 4.559m weekly listeners. It makes Heart Breakfast the biggest commercial radio show in the UK, and the country’s fourth most popular breakfast show. The Heart network has increased its overall weekly reach since introducing a networked breakfast show.

Chris Evans’ Virgin Radio breakfast audience (across the three stations) remains fairly static, adding 3,000 listeners compared with the previous quarter to give a weekly reach of 1.114m. Chris’ listening hours are down though, from 5.35m last quarter to 4.5m in Q3/19.

Wireless’ talkRADIO and Global’s LBC have both seen big year-on-year audience increases, helped no doubt by the arrival of a new Prime Minister in Q3/19 and the ongoing uncertainty over Brexit. talkRADIO is up a whopping 56.7% from a year ago – to its highest ever reach of 409,000.

LBC similarly posts its best ever figures in 46 years on the air – its audience is up 23% across the UK to 2.574m listeners a week, compared with 2.090m this time last year. Nick Ferrari at breakfast breaks another record for the show, with 1.5m tuning in across the UK.

And here’s a wow moment – Nick Ferrari on LBC is now the number 1 commercial breakfast show in London on reach, hours and share, overtaking Capital Breakfast in London for the first time in recent memory, possibly ever! His reach of 813,000 in London is actually down year on year, but in that year he’s jumped above Capital and Kiss.

Eddie Mair celebrates his highest reach on LBC with 865,000 weekly listeners, up nearly 200k year on year in his timeslot.

5 Live hasn’t seen the same effect of a busy summer of news though, with the main station dropping under 5m in Q3/19. A busy summer of cricket, however, helped 5 Live Sports Extra to its best ever reach – a massive 2.195m (up 31% compared with the previous summer, and nearly half a million higher than its previous record audience in summer 2015).

And it’s interesting to note that, while BBC Radio 4‘s total national audience is down 3% year on year to 10.3m, the station has actually increased its audience in London by 7% over the same period – rising to 2.6m listeners in the capital.

With 9.81m listeners, Heart remains the UK’s biggest commercial radio brand – and it’s beaten only by Radio 2 and Radio 4 across all radio listening. Heart’s reach has been helped by a large jump for Heart 80s – which is up 23% year on year to a record 1.672m.

New digital stations Heart 70s, Heart 90s and Heart Dance aren’t in RAJAR yet. If they could pull in a combined audience of a million then the Heart brand could well overtake the Radio 4 brand (including 4 Extra).

The ‘Hits Radio Brand‘ posts a weekly reach of 6.7m in RAJAR, but as well as Hits Radio, Greatest Hits Radio and Country Hits Radio this is made up of stations operating under varied brands including Metro, Hallam, Clyde, MFR, Free and Radio City Talk.

Capital London had a poor book in Q3/19, losing more than a quarter of a million listeners compared with Q2/19 – and just over half a million from a year ago (2.073m down to 1.571m). It means that Magic London is now just 4,000 listeners away from overtaking Capital as the biggest commercial station in London.

All that means Global‘s radio brands now reach 25.4m people every week, with listening hours at 236m. Global has a 24% market share of all radio listening in the UK.

KISSTORY remains the UK’s biggest digital-only station, with its audience up 18.4% year on year. The move to the D1 multiplex earlier this year has helped it to post a record reach of 2.554m in Q3/19.

Despite audience drops for its 70s and 90s stations, the total Absolute Radio Network has increased reach by 1.4% (67k) in a year to now reach 4.921m people each week. As mentioned above, Dave Berry posts a record for his breakfast show with 2.239m listeners. Absolute Radio’s London audience, however, is down 4.4% and Dave has lost 70,000 listeners in the capital in a year (473k down to 403k).

With Magic 105.4 banging at the door to be London’s biggest commercial radio station, it’s also seen good growth nationally, with the Magic Radio Network up 3.6% year on year to now reach 4.2m. This was helped by good growth for DAB services Mellow Magic and Magic Chilled. Mellow is up 23% year on year to 664k, while Chilled rises 12.2% to 377k. Magic Soul is down slightly year on year. Ronan Keating and Harriet Scott’s national breakfast show has added 228,000 listeners over the last 12 months (17.6%) to now reach 1.501m people each week.

Jazz FM remains constant compared with last quarter, but has lost over 100,000 listeners year on year – now reaching 548k across the UK.

Hits Radio as a station across the UK has added 9,000 listeners over the year – going from 801k reach to 810k, while Greatest Hits Radio nationally adds 103,000 from its debut last quarter (up from 715k in Q2/19 to 818k in Q3/19). See our analysis of local radio results for Q3/19 for a detailed picture of how the Hits and Greatest Hits brands are doing on local licences around the UK. Nationally at breakfast, the new team posted a reach of 345,000 this summer – down very slightly from the 349,000 that the previous breakfast team attracted a year ago.

Fun Kids’ over 10 year-olds figures show its best ever reach of 105k.

James Purnell, Director of BBC Radio and Education, says: “We enjoyed a sensational summer of sport and the impact of that can be seen in the figures for Radio 5 Live Sports Extra. Our brilliant coverage of both the Cricket World Cup and the Ashes saw huge numbers of people listening live, helping push Sports Extra to its best ever figures. The country was gripped by Ben Stokes at Headingley and England’s World Cup win.

“I’m proud so many people followed the action on the BBC. Young people’s audio habits have already been transformed with music streaming and the boom in podcasting. These are now spreading wider, with the overall podcast audience growing by 40% during the past year alone and online listening is increasing too.

“Our goal is to keep live listening as strong as possible. We also want to grow BBC Sounds which allows our audiences to discover new podcasts and music mixes, expertly curated by our teams, as well as listen to all our stations and catch up on their favourite shows conveniently. BBC Sounds now has more than two and a half million weekly users, up around 50% since July.”

“The All New Heart Breakfast with Jamie Theakston & Amanda Holden opens with 4.6 million weekly listeners making it the biggest commercial radio breakfast show in the UK, and Capital Breakfast with Roman Kemp opens with 3.7m weekly listeners in its first full card. Overall the Heart brand has broken a new record, extending its weekly reach to a whopping 9.8 million and growing its audience by 150,000 listeners year on year. Global retains the nation’s three favourite commercial radio brands with Heart, Capital and Smooth respectively. Meanwhile, LBC & Nick Ferrari’s record numbers, again, are also incredibly rewarding, especially ahead of the launch of our new rolling news service on Monday, LBC News, which will be breaking news 24/7.

“With Amanda not only breaking her leg this week but also breaking records with Heart’s highest ever audience, here’s to breaking more records (but hopefully no more legs) in the future and congrats to every Globaller who worked so hard to achieve today’s results.”

James Rea, Global’s Director of Broadcasting, added: “During the week in which we have launched LBC News it is hugely rewarding to see that LBC smashes another record with 2.6 million weekly listeners, adding an incredible half a million listeners year on year. Nick Ferrari goes from strength to strength achieving a record reach of 1.5 million making this the No 1 London commercial breakfast show.

“Elsewhere in the Global portfolio I am particularly pleased to see Radio X do so well, increasing its listeners by a staggering 116,000 in the past three months alone, Heart 80s achieving another record high adding another 315,000 listeners in the past year and our Smooth Network scoring a record reach of 5.1 million weekly listeners. These figures speak for themselves showing that Global brands continue to perform well on all fronts.”

“We are thrilled to see our long-held strategy of investing in exciting and engaging digital products continuing with purpose: 72% of Bauer’s listening is now delivered via a digital device versus the industry average of 57%.”

Wireless CEO Scott Taunton says: “In a traditionally quiet summer quarter, I’m very pleased with the performance of our national brands. At Virgin Radio, Chris continues to drive growth for his own show – with the ad break-free format creating more space for great celebrity chat and live music – and that’s driving a lift across other parts of the schedule. talkRADIO continues to set the pace for Brexit analysis and posts another record result.

“And talkSPORT has performed solidly in a summer without a major men’s football tournament – and with our GameDay schedule, we’re delivering more live Premier League matches than ever before.”

JACK CEO, Ian Walker said: “We have been on such an incredible journey with this exciting radio brand, which started with 10,000 listeners in Oxfordshire when we first launched the brand 12 years ago, and today boasts almost 400,000 listeners across five radio stations. Today’s RAJAR results show that we have created a brand that is both strong and dynamic and, most importantly, which our listeners love. Perhaps what is most exciting is that we still have so much more to come for our listeners.”

Tony Lit MBE, Managing Director of Sunrise Radio, tells RadioToday: “With the release of Rajar Q3 2019 this morning I’m pleased to report that Sunrise Radio now in its 30th year of broadcasting is once again confirmed as the unrivalled market leader in commercial Asian radio, consecutively since its launch in 1989. Sunrise Radio’s national service has enjoyed a year on year weekly audience growth of over 20% and is also up on Q2 2019.

“The London service has also enjoyed a year on year weekly audience growth, of over 37% and is also up on Q2 2019. In London Sunrise Radio is the leading Asian radio station and its weekly reach is over two times the size of its nearest commercial Asian radio competitor. This is great news as we approach our big landmark 30th birthday next month.”